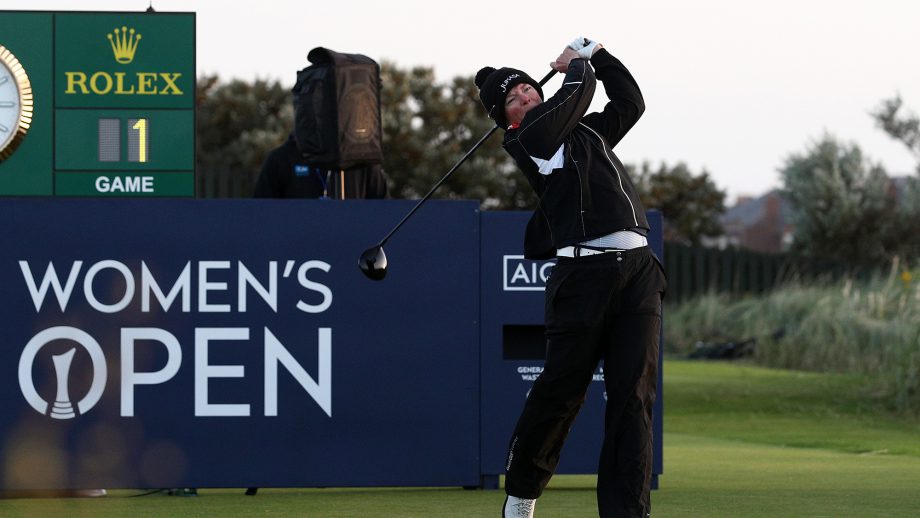 TROON, Scotland – Fences blew over behind Canada’s Alena Sharp as she warmed up for her 6.30 a.m. start.

Buffeted by a gust on the 11th green, Lexi Thompson stepped back from a bogey putt, looked at her caddie, and had a wry laugh.

The opening round of the first women’s major of a pandemic-affected year was a slog for many of the world’s biggest names at Royal Troon on Thursday.

For Amy Olson, though, it was a stroll.

The American was the only player to shoot below 70 in what some said was a four-club wind on the famous links in eastern Scotland, her 4-under 67 earning her a three-stroke lead.

“It was the best ball-striking day of my life,” said Olson, who grew up hitting a low ball in strong winds in North Dakota, standing her in good stead for links play. “But I can’t even describe how difficult it was out there.”

Only two others in the 144-player field – Sophia Popov of Germany and Marina Alex of the United States – shot under par, both with rounds of 70.

“It was brutal,” said Popov, who was playing in 117 degrees Fahrenheit in Arizona last week and only arrived in Scotland on Tuesday.

Danielle Kang would agree. The in-form player – and, at No. 2, the highest-ranked competitor at Troon this week – finished eagle-birdie-birdie just to shoot 76 along with defending champion Hinako Shibuno of Japan.

Stacy Lewis, the 2013 champion at St. Andrews, had the same score after arriving on the back of a win across the country at the Ladies Scottish Open on Sunday.

Among the 10 players tied for fourth place at even par were Sharp and Catriona Matthew, a 50-year-old Scot who was captain of Europe’s Solheim Cup-winning team last year.

Sharp, a Hamilton native, rebounded after hitting her opening shot out of bounds, resulting in a double bogey.

“I was just like, OK, you need to wake up, start playing golf shots.’ Don’t be afraid of the wind,” said Sharp, who had four birdies and no bogeys on the last eight holes. “This is just like all the other rounds I’ve played in the wind. You know, just from there on, I was just in grind mode the rest of the day.”

Sharp has a grandmother and uncle from Scotland.

“I feel like they were watching over me today and giving me a little help out there,” she said.

The conditions at an event being played in an isolated environment because of the pandemic were worse for the morning starters, who encountered winds of up to 50 miles per hour (80 kph). For some, it was four seasons in one day.

Olson went out in the afternoon and made only one bogey, on the par-4 third hole. She responded by chipping in for birdie at No. 4 and hitting to within a foot with an 8-iron from 191 yards for another at No. 6. Another birdie arrived at No. 11, before her tee shot at the par-3 14th hole settled three feet from the cup for another birdie.

The 28-year-old Olson has yet to win as a professional, though came close to capturing a major at the Evian Championship in 2018 when she tied for second place, a shot behind Angela Stanford. She tied for seventh at the Scottish Open last week, suggesting she was in the kind of shape to challenge at Troon.

Popov, who finished birdie-birdie, only qualified for the British with a top-10 finish at the Marathon Classic two weeks ago and was playing on the second-tier Symetra Tour in Phoenix last week, tying for second.

Alex rebounded from a double-bogey 7 at No. 6 with three birdies in a bogey-free final 11 holes.

Former No. 1 Lydia Ko and No. 4-ranked Nelly Korda were among those to shoot 72.

Top-ranked Jin Young Ko, a winner of two majors last year, is absent from the tournament in Scotland along with fellow South Koreans Sung Hyun Park (No. 3) and Sei Young Kim (No. 6) because of coronavirus restrictions. Jessica Korda, the sister of Nelly, withdrew just before the start of the first round with an illness not related to COVID-19, organizers said.

The weather could be even tougher on Friday, with near-gale force gusts forecast in the afternoon.