Another big step in return of Jarrod Lyle 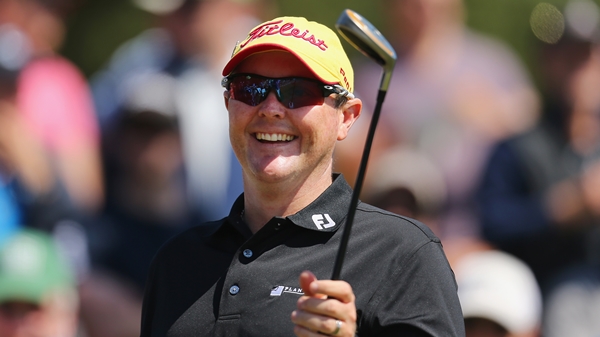 NAPA, Calif. – Jarrod Lyle takes another step back in his amazing return from twice beating leukemia, and this one might be the biggest one yet.

He earned his spot in the Frys.com Open through a playoff at Monday qualifying.

And he’s back among the best players in the world on the PGA Tour, part of a family he never knew was so large.

Lyle got choked up Wednesday talking about a DVD he was given shortly after leukemia returned in March 2012, right about the time his wife was due to give birth to their daughter. Golf Channel arranged for players at Bay Hill to say a few encouraging words to the Australian.

“I watched it and I cried for 45 minutes,” Lyle said Wednesday. “I still cry when I look at it. These guys were taking 30 seconds out of their day to jump on camera to wish me all the best, guys that I probably haven’t spoken to much or haven’t played with before. But to see those guys get on there and just wish us all the best, that meant the world, and it showed me how much support that I had from my competitors and my peers over here.”

This is the third time Lyle has returned to a tour.

The most emotional was at home in Australia last December, when he made the cut riding a wave of support. He came back to America this summer to play on the Web.com Tour as he continued to work on his game.

The Frys.com Open was not on his schedule. Lyle received a sponsor’s exemption to the tournament next week in Las Vegas. He did not receive one to the Frys.com Open, so he decided to go through Monday qualifying. Nothing comes easily to Lyle, and he never complains.

Instead, he shot a 66 to get into an eight-man playoff for four spots. He made a 20-foot birdie putt on the second hole and was in.

“I sort of a gave myself a little fist pump and thought, `I’ve done it.’ But in the car on the way home, I kind of screamed like a little girl that I’d finally done it and got myself into a tournament that I wasn’t going to be playing. I came up here with a job to do.

“To come out and achieve my first goal this week, which was to Monday qualify, it’s got the year off to a really, really good start.”

He will head home to Australia after next week to get his blood tested as a precaution. Lyle is no longer taking any treatment except for a penicillin tablet he takes once a day for the rest of his life. He was on the putting green at Silverado with his neon yellow bucket hat. He was among friends.

His wife, Briony, and daughter, Lusi, were at his side. Lyle’s daughter was playing with a pair of small, rubber duck toys as he gave a radio interview on the phone.

The ducks resemble the “Leuk the Duck” character that Robert Allenby, his longtime mentor, passed out to players to wear at Bay Hill when Lyle was diagnosed. Lyle has plenty of friends on the PGA Tour. He just didn’t realize until he got sick how many.

“I think the reason Australia was so emotional is because I have a lot of family and friends around,” he said. “There were family and friends around me the whole time that helped out with my wife and Lusi and were visiting me in the hospital. But I think this is going to be just as emotional because these guys on the PGA Tour, they’ve reached out to us from the start and they’re always texting and emailing and getting in contact and just making sure we’re doing OK.

“To be able to have them in your corner, helping you deal with everything, that’s great,” he said. “I’ve enjoyed the last couple of days just being out here and seeing everybody and thanking them for their support over the last couple of years.”