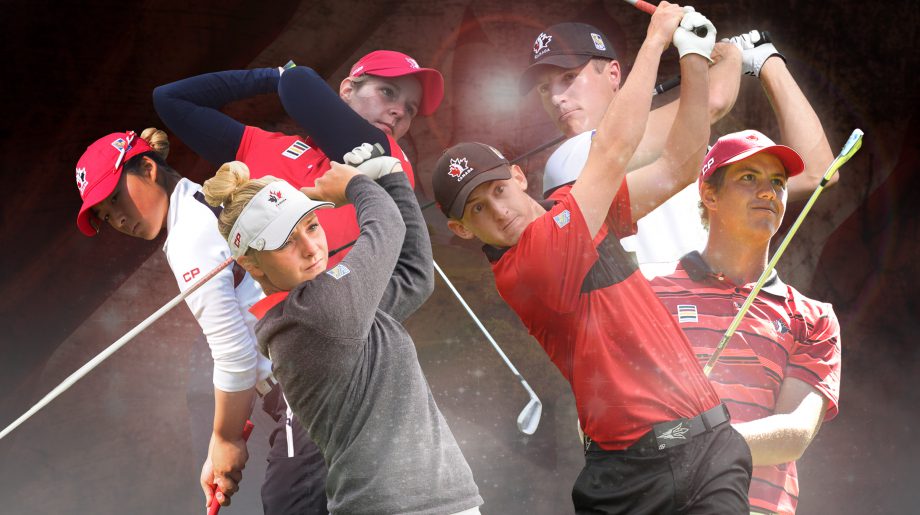 Oakville, Ont. – Golf Canada is pleased to announce the six individuals selected to represent Canada at the 2016 World Amateur Team Championship, conducted by the International Golf Federation. The championships—featuring both a women’s (September 14-17) and men’s (September 21-24) competition—will take place in Riviera Maya, Mexico.

Representing Canada on the women’s side will be Maddie Szeryk, 20, of Allen, Tex., Josée Doyon, 23, of St-Georges-de-Beauce, Que., and Naomi Ko, 18, of Victoria, B.C. The trio will compete for the Espirito Santo Trophy at the Mayakoba El Cameleón Golf Club and Iberostar Playa Paraiso Golf Club.

“The World Amateur Team Championships are one of the pinnacle events that we use to benchmark our players performance and development globally,” said Jeff Thompson, Golf Canada’s Chief Sport Officer. “Our recent success in this event is a reflection of our commitment to supporting and developing some of the world-class talent that we have here in Canada, and we hope to demonstrate that again this year with the remarkable group of athletes chosen to represent us. Though the selection process was difficult, I remain confident that this team will represent our country in a very positive light.”

Women’s Team Bios:
Maddie Szeryk, a member of Team Canada’s National Squad for the past two years, will lead the women’s squad into competition as the top-ranked Canadian at No. 40 on the World Amateur Golf Rankings (WAGR). She finished a strong sophomore campaign at Texas A&M by earning First Team All-SEC honours for the second consecutive year, highlighted by a win at the Florida State Match-Up. Szeryk’s summer featured strong finishes at the Canadian Women’s Amateur (T14) and North & South Amateur Championship (Round of 16). The 2015 Ontario Women’s Amateur champion added valuable experience playing in her second consecutive CP Women’s Open against the LPGA’s top athletes. The 20-year-old has prior experience representing Canada on the global stage, finishing tied for 15th at the 2014 Youth Olympics in Nanjing, China.

Josée Doyon is in her rookie year on Team Canada’s National Amateur Squad, but has the poise of an experienced veteran. Doyon is fresh off completing her collegiate golf with the Kent State Golden Flashes, where she was named the Mid-American Conference Golfer of the Year in her junior season on the heels of three consecutive wins. The 23-year-old has consistently posted impressive results in 2016, including defending her title at the Quebec Women’s Amateur Championship, a win at the Porter Cup and a T9 finish at the Canadian Women’s Amateur.

An experienced member of Canada’s national team, Naomi Ko is in her fourth year with the Team Canada program. The 18-year-old spent three years with the Development Squad before graduating to the Amateur Squad this season. Ko has shown flashes of brilliance on home soil this summer, capturing the Canadian Junior Girls Championship and recording a T7 finish in the deep Canadian Women’s Amateur field. She also gained LPGA experience in 2016 by qualifying for the U.S. Women’s Open and playing in the CP Women’s Open. In 2015, Ko finished 5th at the B.C. Women’s Amateur and T2 at the Ontario Women’s Amateur.

Men’s Team Bios:
Jared du Toit became a familiar name to Canadians following his captivating performance at the PGA TOUR’s RBC Canadian Open. The Kimberley, B.C., product captured the hearts of many in a thrilling run at Glen Abbey Golf Club, where he played in the final group on Sunday to crack the Top-10 in a tie for ninth. The 21-year-old is entering his senior year of collegiate golf for the Arizona State Sun Devils, following a junior season that saw him post five Top-10 finishes. His impressive campaign also features Top-5 finishes at the Monroe Invitational and Porter Cup, a win at the Glencoe Invitational and a T15 finish at the Canadian Men’s Amateur. In 2015, du Toit was crowned the B.C. Men’s Amateur champion.

Garrett Rank is no stranger to competing for Canada on the big stage, having done so for three years as part of Team Canada’s Amateur Squad. At 28 years old, Rank is balancing a busy career on the road as a full-time NHL referee, while continuing to compete at high-level amateur golf events. The Elmira, Ont., native recently locked up his third consecutive victory at the Canadian Men’s Mid-Amateur Championship to add to a T9 finish at the Canadian Men’s Amateur and a T2 finish at the Sunnehanna Amateur. He added a T77 finish in his second consecutive RBC Canadian Open appearance and a round of 32 finish at the U.S. Amateur. Rank also boasts the experience of representing Canada in the 2015 Pan-American games, where he finished 15th.

Hugo Bernard made a lasting impression in his rookie campaign with the Saint Leo Lions, posting six Top-5 finishes in eight events, including medalist honours at the NCAA Div II Championship. His efforts at Saint Leo earned him Freshman of the Year honours to go with being named as a first-team all-American. The 21-year-old Mont-St-Hilaire, Que., product followed his collegiate season with a victory at the Canadian Men’s Amateur Championship after finishing runner-up the year prior. Bernard also collected a win in his home province at the Alexander of Tunis.

About the World Amateur Team Championships:
A biennial competition, the World Amateur Team Championship has been played since 1958, with the winner taking home the Eisenhower Trophy. The United States won the 2014 title in Karuizawa, Japan, by two strokes over the Canadian contingent of Corey Conners (Listowel, Ont.), Taylor Pendrith (Richmond Hill, Ont.) and Adam Svensson (Surrey, B.C.).

The 2018 championship will be contested at Carton House (Montgomerie and O’Meara Courses) in Maynooth, Ireland.