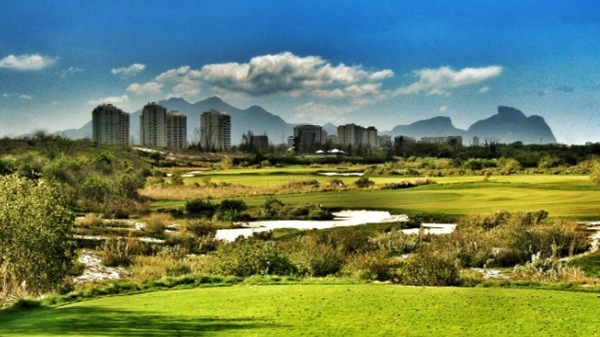 An illustrative view of the Olympic golf course (Rio 2016)

RIO DE JANEIRO, Brazil – The decision to put down grass on the contested 2016 Olympic golf course amid continued legal wrangling could prove to be a costly mistake, a Rio de Janeiro public prosecutor warned on Wednesday.

The public prosecutor’s office is taking on the city government and the golf course developer in a lawsuit that contends environmental rules were breached in building the course, which had been billed as one of the highlights of the Rio Games.

Marcus Leal told The Associated Press that the two sides are in a 30-day negotiation period aimed at resolving their differences. But if they fail to reach an agreement, a judge would then rule on the matter. Should the judge end up siding with the public prosecutor’s office, it could mean that the grass that’s currently being laid might have to be ripped out, Leal said.

“The end result could be a large financial loss (for the developer),” Leal said. “Should our demands be approved, we will obviously require the restoration of the environment. Meaning what? More investments for the developer in removing the non-native vegetation – the grass. If he already invested a fortune in putting down the grass, he’s going to have to pay another to remove it.”

Leal said he hoped it wouldn’t come to that, adding that he believed a deal was possible. But he placed the onus for any possible agreement squarely on the city and the developer, Fiori Emprendimentos.

Golf will be back at the Olympics after a 112-year absence, but the legal wrangling over the course has taken the gloss off the sport’s return.

The course has been plagued by delays dating back almost five years. Much of the controversy arises because the course is being built in a nature reserve, situated amid some of the most expensive real estate in suburban Rio; an area known as Barra da Tijuca.

“In entering into any dialogue, we know that the possibility of a deal depends on yielding on one point or another,” Leal said. “Our problem is finding a point on which to yield. ”We are already at the outer limit of what we consider our margin of manoeuvr in this matter. I think that a deal, which I consider possible, will depend much more on the efforts of the city and of Fiori.“

Leal and his team have asked the developer to move the course to allow for a wildlife corridor 400 metres (400-yards) wide that would link the two sides of the nature reserve. The city and the developers contend such changes are impossible and instead offered to move three of the holes and replace the native vegetation in other areas along the edges of the course.

Leal said both sides were carrying out technical studies to determine whether such a proposal would go far enough to preserve the area’s native fauna.

Leal acknowledged how sensitive the case was, particularly given the time constraints.

An Olympic test event is slated to be held late in 2015 or early 2016. Any further delays on course construction could imperil the test event and again raise questions about Rio’s preparations.

It will also underscore the fact that the city already has two courses, one of which has hosted major professional events. Many have suggested the new course has little to do with golf and more to do with real estate speculation.

“I think it’s not an easy matter to decide,” Leal said.