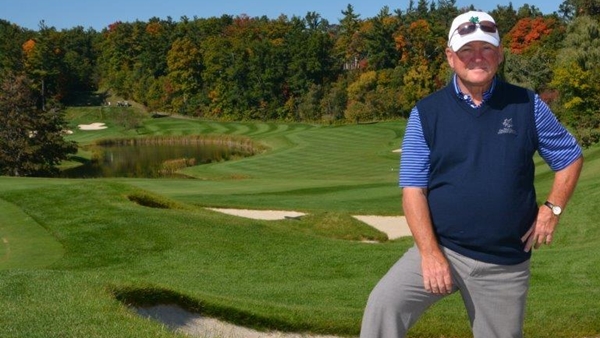 What goes around comes around in Adam Brown’s world.

Forty years ago this past summer Brown picked up the phone, put his index finger in the rotary phone at his parents’ home in Dundas, ON and dialed long distance to a town called Woodbridge.

News a fabulous new golf course named The National Golf Club designed by the team of American golf course architects George and Tom Fazio had been buzzing around the province for a few months and Brown wanted to see what it was all about for himself.

By that time the 21-year-old had won the Ontario Junior Boys’ Championship, lost in a playoff to Kelly Roberts in the Canadian Junior Boys Championship and was playing well in the US on a scholarship at Miami University in Oxford Ohio.

“I grew up trying to be like Jack (Nicklaus),” said Brown who started to play the game at the age of nine at what is now Hidden Lake GC in Burlington followed by Glendale G&CC. “I have never met Jack, but I did have one of my first lessons from his instructor Jim Flick at Cincinnati County Club.”

Brown’s stomach twirled with a touch of nervousness and anticipation as the phone rang and he waited to be connected to Ben Kern, a noted professional who would be named the club’s Head Professional in 1976.

“The course wasn’t officially open at that time and I didn’t even know if Ben would know who I was, but I wanted to give it a try”, Brown says as he sits in the club’s modern day clubhouse that opened in 2008. “I’ll never forget that call, I introduced myself and asked if I could play and he warmly welcomed me. Ben said, “Yes” to junior champions because he wanted to promote the game and help aspiring young players. He knew who the players were.”

Brown played his first round at The National on his own. At every turn and with every shot he could not believe what he was seeing and playing.

“As I drove in along old Pine Valley Drive to the clubhouse I couldn’t believe my eyes. It was the first course of its kind in the country and it looked incredible,” says Brown. “I remember being amazed by the quickness of the green speeds. I had never played on anything like that and there were no pitch and run shots to be made at The National. I grew up with a pitch and run game. All of a sudden I was being faced with having to make a lob or a flop shot when I missed a green and it was very challenging.”

The sight and size of the Fazios’ fairway and green side bunkers also made Brown take a second look and sometimes a third before firing away.

“I asked Ben, “Is this the way modern golf is going? And he said, “Yes,” recalls Brown, who returned to play the course two more times that summer with his father and was personally welcomed back each time by Ben.

Today, at The National Golf Club of Canada, there was an official name change along the way, Brown is Head Professional. He started working at the Club as an assistant in 1999 and took the top job in 2005, after winning the 2004 PGA Seniors’ Championship of Canada.

Its three original founding members; Gil Blechman, Harvey Kalef and Irv Hennick each passed away within seven years of each other between 2000 and 2007. As legend goes the dream of The National was conceived on a hot, lazy afternoon in the summer of 1972 at Maple Downs G&CC where the trio were members. They were tired of the slow play and kids splashing around in the pool during their back swings. It was time for a change when Kalef said, “Enough of this crap. What we ought to do is buy ourselves a super golf club, the best anywhere. We’ll make it exclusive, for men only.”

That was a Friday afternoon and Blechman knew of a course that was for sale. On the Monday, Kalef went to his lawyer and without having seen Pine Valley Golf Club put in an offer to purchase from the estate of the late Jack Bailey that was accepted.

They hired the Fazios’ to design, “the best golf course in the world and money’s no object,” Blechman said. It’s a good thing it wasn’t, because Tom Fazio told Blechman he needed more land to make his dream reality and they proceeded to buy three adjoining farms totalling 135 acres. Construction of the Fazio masterpiece started on May 15, 1973, the land was cleared by June 1st and the course was finished in three months with an official opening in 1975. The Fazio golf course design team continue to make annual visits to the club to review the course and make suggestions for tweaking the layout.

When it first opened the course, which was an instant success and on its way to quickly becoming the No. 1 golf course in Canada, the layout had three sets of tees. Today it has four sets of tees with two hybrid options for a total of six playing options measuring from 6002 to 7,235 yards, par-71. It’s very first scorecard had Al Balding as Head Professional and Ken Venturi as Associate Director with the tees measuring 5,855 yards, 6,306 yards and 6,989 yards, par-71.

“The course continues to evolve without losing its essence of being tough but fair and that’s what makes it timeless,” Brown says. “It was tough 40 years ago and it has that exact same toughness today although there have been changes and that is truly remarkable.”

Once a year players gather for the Ben Kern Pro-Am. It’s the only tournament at the club played from the back Gold tees. It’s one of the exceptional golf experiences in Canada that only the lucky few have the opportunity to play.

The favourite part of Brown’s job is seeing the expressions of first time guests as they play the course. “I’ll greet them when they arrive and I’ll go out and see them on the seventh or eighth hole and you can see it in their eyes. It gets everybody and the better the player the more they have recognized what they have played.”