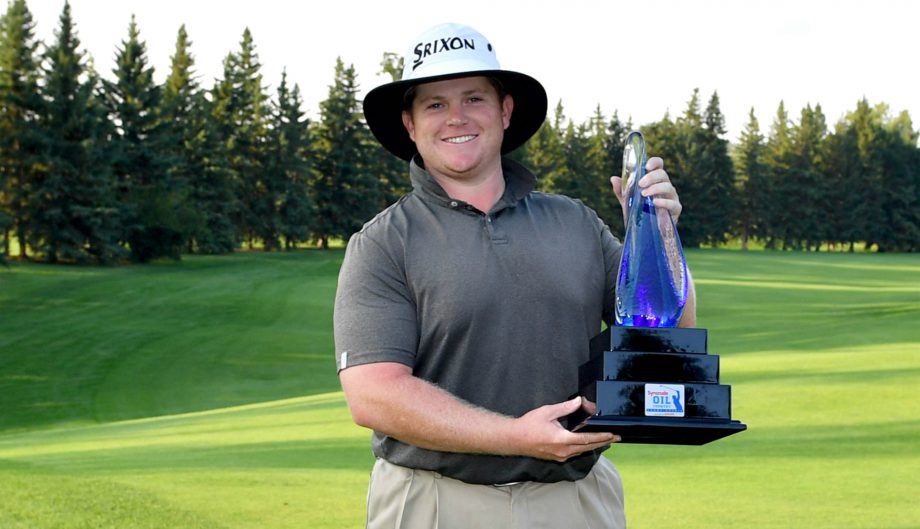 Murray, Kentucky’s Patrick Newcomb endured a marathon day of 38 holes at Windermere Golf and Country Club on Sunday, shooting a final round 4-under 66 then defeating Germany’s Max Rottluff in a playoff to win the Syncrude Oil Country Championship presented by AECON for his first Mackenzie Tour – PGA TOUR Canada win.

The 27-year old sank a curling 18-foot birdie putt on the fourth extra hole to become the first player to win on both the Mackenzie Tour and PGA TOUR Latinoamérica, where he captured the Honduras Open presented by Indura Beach and Golf Resort earlier this year.

“I came up here to win. A win really solidifies you and puts you in a good spot, and after three tough years, this has been the year for me to get to the Web.com Tour,” said Newcomb, who now ranks fifth on the Mackenzie Tour Order of Merit and eighth on PGA TOUR Latinoamérica.

Starting the day one shot back of Tacoma, Washington’s Derek Barron, Newcomb had 16 holes left to finish Round Three, in which he carded a 2-under 68 to remain one behind Barron. It was Rottluff, however, who quickly emerged as the man to beat, playing well ahead of the leaders and carding six birdies in his first 13 holes to jump out to the lead at 16-under, where he would go on to post the clubhouse lead.

“I felt I played pretty good. Starting the day out, I don’t know how many shots back I was, so it was a long day for sure and I played well,” said Rottluff, a winner already this year at the Bayview Place Cardtronics Open presented by Times Colonist, as well as last year at the SIGA Dakota Dunes Open.

Heading to the back nine four shots behind, Newcomb needed a spark and found it thanks to some inspiration from his caddie, Windermere member Dave Kakoschke.

“Dave kept me in it on the back nine. I was walking down 10 and I hit it right and I was in a bad spot, and he goes, ‘let’s be scrappy and get around here, make a couple birdies and see where we’re at.’ That shoved me back in it, and we were just rolling from there,” said Newcomb, who reeled off three straight birdies to get within one.

With one shot to make up down the stretch, Newcomb continued to play aggressively, eventually making a 15-footer for birdie at 17 to match Rottluff with one hole to go.

“I knew if I didn’t play well down the stretch and folded, that’s just part of it,” said Newcomb, adding that the adrenaline from being in the hunt kept him going on a marathon day. “Once you have a chance to win, everything livens up a bit.”

The Murray State graduate had a chance to win outright on 18, but left his putt for the title just short to fall into a playoff. The first three extra holes settled nothing, with Rottluff missing two long but makeable putts for the win and Newcomb lipping out on one.

Finally, after finding the 18th green for the fifth time on Sunday, Newcomb finally got his birdie putt to drop for the first time all day, securing the win and leading to an exuberant fist pump to accentuate the win.

“I thought I missed high, that was the funny part,” admitted Newcomb about his winning putt. “I just gave it a little more, and five feet away I was like, ‘I cannot believe this is not gonna go in.’ It just curled in the top edge, and it felt amazing.”

With a total score of 11-under par in a tie for ninth, Kimberley, British Columbia’s Jared du Toit finished as the top Canadian on the leaderboard, earning Freedom 55 Financial Canadian Player of the Week honours and a $2,500 prize.