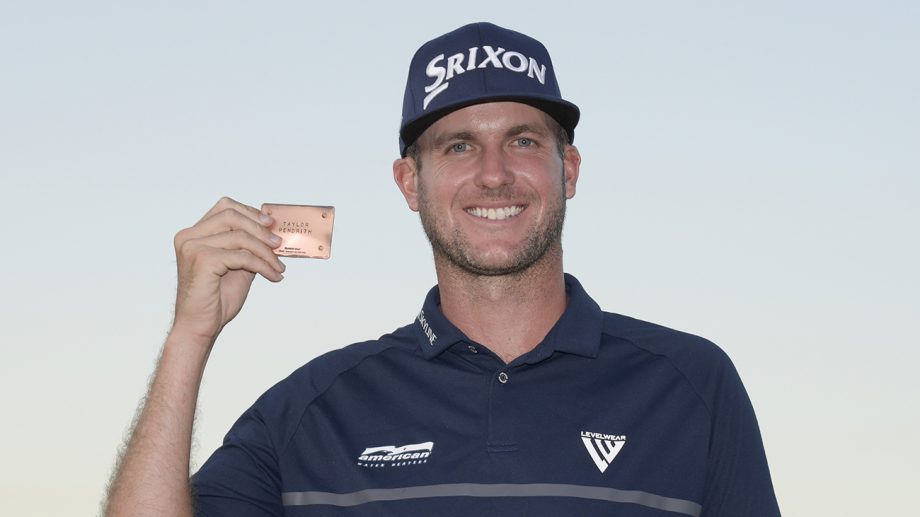 OMAHA, NE - AUGUST 15: Taylor Pendrith holds his PGA Tour card after the final round of the Korn Ferry Tours Pinnacle Bank Championship presented by Aetna at The Club at Indian Creek on August 15, 2021 in Omaha, Nebraska. (Photo by Stan Badz/PGA TOUR)
Lara Kuipers

With the conclusion of the season-ending Pinnacle Bank Championship in Nebraska – the Korn Ferry Tour’s top 25 on the point list were finalized.

For Svensson, it’s the conclusion of a two-year battle to find his way back to the PGA TOUR, after finishing outside of the playoff cut in 2019, sending him back down to the Korn Ferry loop.

But for Pendrith, it’s been a longer journey to make it to the top. After initially qualifying for the Korn Ferry Tour for the 2016 season, Pendrith lost his card the following year due to injury and was sent back down to the Mackenzie Tour – where he’d have to restart the climb to the top.

Since then, Pendrith has been on the prowl – finishing second on the Mackenzie Tour in 2019 and continuing that momentum into the 2020-2021 Korn Ferry Tour season.

And although he’s receiving the coveted PGA TOUR card for the first time, Pendrith is not new to the top-level tour. In fact, he played in six events on the PGA TOUR over the course of the 2021 season, including both the U.S. Open at Winged Foot Golf Club in 2020 and at Torrey Pines Golf Club in 2021.

In those six starts, he only missed the cut once, and finished inside the top 25 on three separate occasions, including a career-high finish tie for 11th at the Barbasol Championship. At the 2020 U.S. Open, in a field that included famously long-hitters Bryson DeChambeau, Rory McIlroy and Bubba Watson, Pendrith finished third in overall driving distance, behind just Matthew Wolff and Dustin Johnson.

For Svensson, it’s been nearly two years since he last played an event on the PGA TOUR, which resulted in a missed cut at the Sanderson Farms Championship in September of 2019. But Svensson was a dominate force this season on the Korn Ferry Tour, with 17 top 25 finishes, including a win at the Club Car Championship in March.

While Pendrith is still looking for his maiden Korn Ferry Tour win, his four runner-up finishes this past season were more than enough to place him safely into a position to secure his card.

Pendrith will join his former Kent State University teammates Mackenzie Hughes of Dundas, Ont., and Corey Conners of Listowel, Ont., who both re-earned their PGA TOUR cards for the following season.

Roger Sloan of Merritt, B.C. and Adam Hadwin of Abbotsford, B.C., both also re-earned their cards, and Svensson will bring the B.C. contingent on tour up to three, and the Canadian total up to six.

As a result of winning the AT&T Pebble Beach Pro-Am in 2020, Nick Taylor of Abbotsford will also be on the PGA TOUR for the upcoming season.

Michael Gligic of Burlington, Ont., and David Hearn of Brampton, Ont., both finished between 126-200 on the PGA TOUR this season, so they will get a second chance to re-earn their PGA TOUR cards at the Korn Ferry Tour Finals.

While Pendrith and Svensson have already secured their cards, they will have the chance to gain a higher ranking on the priority list by taking part in the three-event finals.

The first of said events will be the Albertsons Boise Open at Hillcrest Country Club in Idaho from Aug 19 – 22.