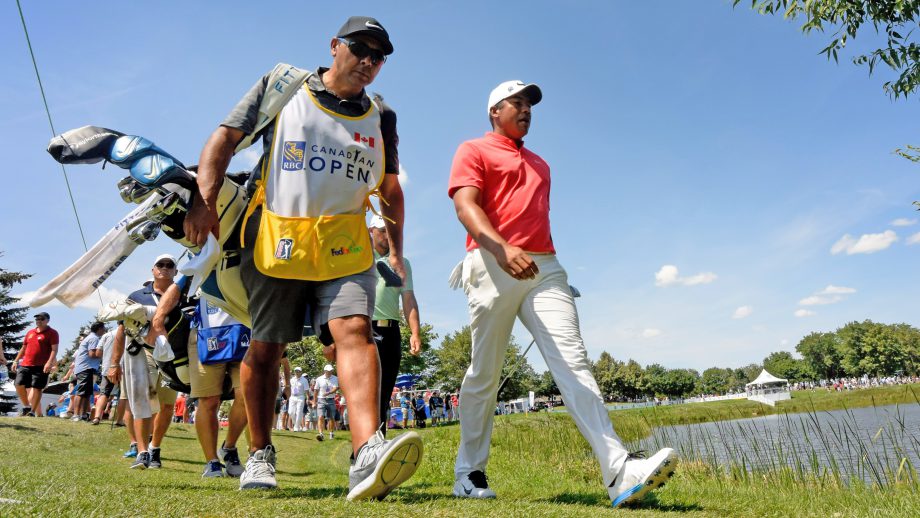 It was a change of plans for Ruben Yorio—one that would hit him in the pocketbook, but certainly not the heart. His boss of three years, Jhonattan Vegas, had just missed the cut at the Travelers Championship in Cromwell, Connecticut, and decided to make a schedule adjustment in light of his mediocre play in 2018—a drought mostly borne of short-game woes that ranked him 166th on Tour around-the-green and 147th in putting heading into the end of June.

“We sat down in the locker-room after he finished and he said he’s going to take the next two weeks off—that he wanted to be ready for the Open at Carnoustie and to defend his title in Canada,” Yorio explains. “He said, ‘I’m not playing well. I need to go home. I’m mentally tired. I’m going to see my coach (Kevin Kirk, who also works with Masters champ Patrick Reed).”

That meant an unexpected vacation for Yorio—a welcome return to his wife Mara and seven-year-old daughter Catalina—except that there are no quick and inexpensive jaunts to see the family for Yorio, who, seated at JFK International Airport in New York on June 23rd, was more than 8,500 kms from his hometown of Ezpeleta, on the southern outskirts of Buenos Aires, Argentina.

“It’s usually a $1,000 round-trip to from Miami,” notes Yorio, who says it without a hint of regret. He is immensely grateful to be a longtime member of the travelling troupe of PGA Tour caddies, a career that has included four victories: the 2009 Masters and 2014 Greenbrier Classic with fellow Argentinian Angel Cabrera, the 2011 Dubai Desert Classic with Alvaro Quiros and last year’s RBC Canadian Open with Venezuelan Vegas.

It’s an unlikely career path for Yorio. His father, a railway station worker, died of a heart attack when Ruben was 14, leaving Yorio’s mother, Emma, to raise he and his younger brother Leo.

“We were from a poor background,” Yorio relates. “My mother was working six days a week at a laundromat—she was our only support. She would leave no later than 7:00 in the morning and not get home until 7:00 or 8:00 at night. She did a fantastic job raising us, and we helped her out where we could.

“I had a good friend in a similar situation and hadn’t seen him in a few days,” Yorio remembers. “Then he showed up one day and had a new bike, new shoes and new clothes. And I said, ‘What are you doing, Fabian?’ And he said, ‘I am caddying at Ranelagh Golf Club.’”

As a 12-year-old, Yorio couldn’t have appreciated the history of the private course seven kilometres to the south—the hallowed ground of World Golf Hall of Famer Roberto De Vincenzo, winner of eight PGA Tour events, including the 1967 Open Championship. De Vincenzo, who lived a couple blocks from the course until his passing last June, had, himself, caddied at Ranelagh, where he’d also honed his game.

“Fabian took me there and I started caddying for the members. I could make $25 US a day, which was a lot of money,” says Yorio, who typically made the long trek on weekends as well as most Wednesdays (Women’s Day) by bus, although, when money was short, he’d take his bike or even walk.

At age 18, Yorio advanced to the professional ranks when he began carrying for a former fellow Ranelagh caddie, Rodolfo Gonzalez. That eventually led to a season on the European Tour with Vincente Fernandez, before a three-year stint on the LPGA Tour. The latter included an extended relationship with a Calgary woman, but when that broke down, Yorio found the true love of his life.

Mara Larrauri, a regular at Ranelagh GC, had returned from Campbell University in North Carolina, where she played on a golf scholarship. Who better than Yorio to shoulder her bag on the Futures (now Symetra) Tour. “Driving to every tournament in an old Mercury—24/7 together and really getting to know each other—was an amazing experience,” recalls Yorio, who married Mara in 2008 and wears out his cell phone staying in touch with his wife and Catalina, while returning to Ezpeleta as often as possible through the golf season.

“I love Mara to death—she’s taught me so much about life, about being kind to people. She made me better—she’s one of the reasons I’m here,” says Yorio of Mara, who now works at her family’s construction business.

Yorio was inspired by her work ethic as well. “When she was picked as Campbell University’s Athlete of the Year, her coach talked about how she was always the first one at practice. One time she didn’t have a car and the range was two miles from her dorm. Her coach saw her walking beside the highway carrying her clubs to practice.”

Yorio, who turns 49 in December, also credits fellow Argentine looper Adrian ‘Coco’ Monteros for his personal and professional development. “I learned a lot from Coco. He’s gone through a lot, but is a super nice, honest, wonderful person. He’s always said, if you do the right thing and keep trying, good things will come to you.”

Those good things have included one Masters crown for Yorio. “Cabrera was good to me, but his son started caddying for him, so they asked me to go part time, but I had a family to support,” he relates.

No hard feelings, especially in light of Tour victories since, including $108,000 US (minus Canadian taxes) for his work at the 2017 RBC Canadian Open—the standard 10% caddie cut for Vegas’ $1,080,000 first-place cheque.

Yorio is, expectedly, excited to be returning to Glen Abbey and the prospect of Vegas attempting to threepeat July 26-29. That 27-pound bag—“I’ve tried but can’t make it lighter than that”— seems a little easier to bear north of the border. “I’ve always had good memories of Canada.”

And he has life in perspective. Yorio’s 79-year-old mother, Emma, is suffering from Alzheimer’s. “She’s not doing great. She still remembers her phone number from her first house, but forgets stuff that just happened, and doesn’t know things like when to eat or shower. It will be good to see her.”

Yorio was counting the minutes before boarding his plane to Buenos Aires, to playing toy golf with Catalina and some personal time with Mara.

Some missed cuts, he figured, are better than others.

For ticket, volunteering, sponsorship and corporate hospitality information on the 2018 RBC Canadian Open, details are available online at www.rbccanadianopen.com