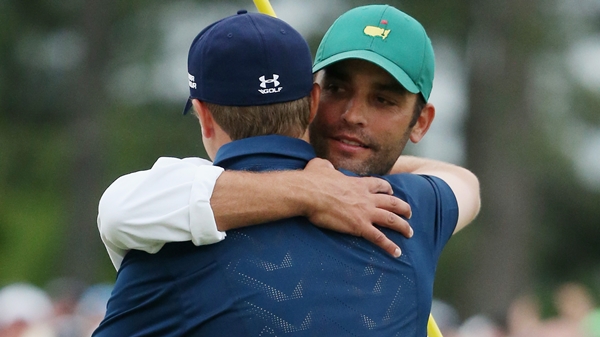 AUGUSTA, Ga. – Michael Greller thought his Masters’ experience peaked in 2012 when he won Augusta National’s ticket lottery and he leaned over the ropes to get his picture snapped with Phil Mickelson and his caddie.

Greller now is the caddie for record-setting Masters champion Jordan Spieth, the first wire-to-wire winner since Raymond Floyd in 1976.

“I thought three years ago was the pinnacle just being out there walking around …,” Greller said Sunday. “Being here two years later, that was pretty surreal, and I think that was the best thing that probably happened to us not winning it, and certainly all that experience came into play all week, and especially today.”

Greller started tending Spieth’s bag in 2011, when the Texan played in the U.S. Junior Amateur and needed a caddie. Spieth won his second USGA title with Greller, who worked for the 21-year-old at the U.S. Open in 2012. Spieth called Greller when he turned pro that year, and he gave up his teaching job in Seattle.

That teaching experience still pays off as Greller works with someone who doesn’t turn 22 until late July.

“If he needs to let things go, I’m the person who’s going to bounce it off of him,” Greller said. “Just being able to adapt to situations I think that’s certainly something from teaching school for so long you have to do out here. You have to be able to adapt week to week, day to day, today hole by hole with the wind doing what it’s doing.”

He later credited his caddie for keeping him focused on the front nine, when he had a couple bogeys.

Both men had a big learning experience here a year ago. Playing with eventual champion Bubba Watson in the final group, Spieth grabbed a two-shot lead after the seventh hole before losing. Greller said he was happy to see Watson and his caddie win last year with Spieth also having a great week despite the loss.

This time around, Greller made sure to talk all week with Carl Jackson, who caddied for two-time Masters champ Ben Crenshaw for so many years here. He also talked with another caddie, Derek Reed, and had dinner with Jim Mackay last night, the man better known as Bones – Mickelson’s caddie.

Greller said the key is knowing when to stay out of Spieth’s way.

“The first week I caddied for him, he told me he relied too much on his caddies …,” Greller said. “I’m sure there’s tons of guys that are better caddies. I still consider myself a rookie. But I have a rapport with Jordan.”

Now Spieth has his first major title and third overall. So could Greller and Spieth be the next Phil and Bones?

“No. No,” Greller said. “They have 50 more wins and a lot more majors. … But it’s certainly somebody to emulate.”