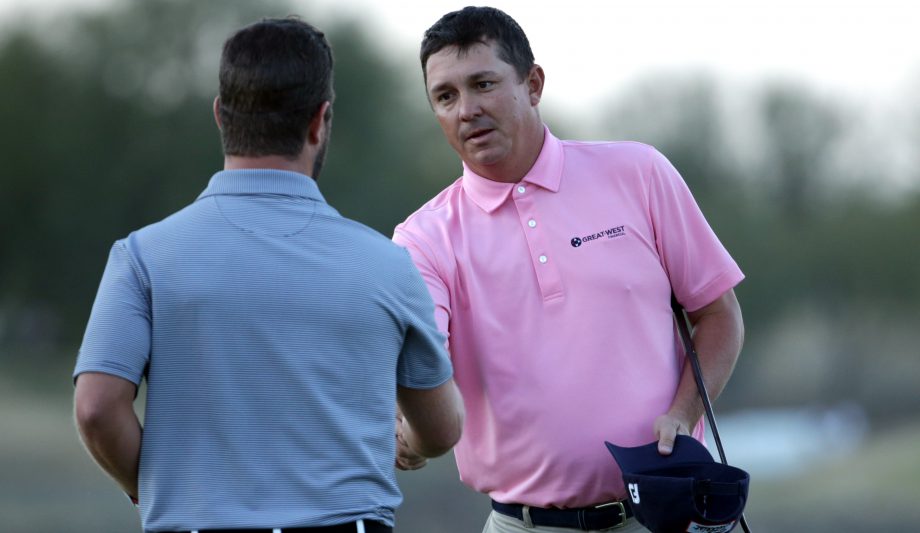 LA QUINTA, Calif. – Jason Dufner won the CareerBuilder Challenge with a par on the second hole of a playoff Sunday, taking advantage of David Lingmerth’s shot off the rocks that bounced into the water.

Dufner finished with a 2-under 70 on PGA West’s TPC Stadium Course to match Lingmerth at 25-under 263. Lingmerth shot a 65, matching the best score of the day on the difficult course that was used in the tournament for the first time since being dropped after its 1987 debut.

In regulation on the island-green 17th called Alcatraz, he pulled his 8-iron tee shot left and the ball bounced into a narrow sandy area between rocks that circle the putting surface. Maneuvering his club around the rocks, he hooded the clubface and hooked a chip that struck the flagstick and stopped inches away.

On the first extra hole on the par-4 18th with rocks and water running the length of the left side, Dufner hit his 3-wood drive near the lip in the front of a right-side bunker. Unable to reach the green, he blasted out 100 yards to set up a 110-yard third shot that he hit to 11 feet.

Lingmerth hit his approach from the right rough to 23 feet, but missed the birdie try. Dufner then holed his putt to send the playoff back to the 18th tee.

Dufner switched to a driver and followed Lingmerth into a grass bunker on the right side. Lingmerth’s approach from 184 yards crashed into the rocks along the edge of the fairway and shot left into the water.

Dufner hit the front of the green with his second shot and two-putted for par, holing a 5-footer after Lingmerth missed his par try from 22 feet.

The 38-year-old Dufner earned $1,044,000 for his fourth victory on the PGA Tour and first since the 2013 PGA Championship. He shot a 64 on Thursday on the Nicklaus Tournament Course for a share of the lead, had a 65 on Friday on the Stadium Course to take a one-shot advantage, and added a 64 on Saturday at La Quinta Country Club to pull two shots ahead.

Lingmerth also lost a playoff in the 2013 tournament on PGA West’s Palmer Private Course. That year, the Swede dropped out on first extra hole after hitting his approach into the water and making a bogey. Brian Gay went on to beat Charles Howell III with a birdie on the second hole.

Phil Mickelson shot a 68 to tie for third at 21 under in his first start since the Presidents Cup in October and first since splitting with swing coach Butch Harmon to work with Andrew Getson.

Canadian Adam Hadwin shared the lead with Dufner thru 9 holes Sunday, but went 2-over on the back nine to finish in a tie for 6th with Americans Luke List and and Jamie Lovemark at 20-under.