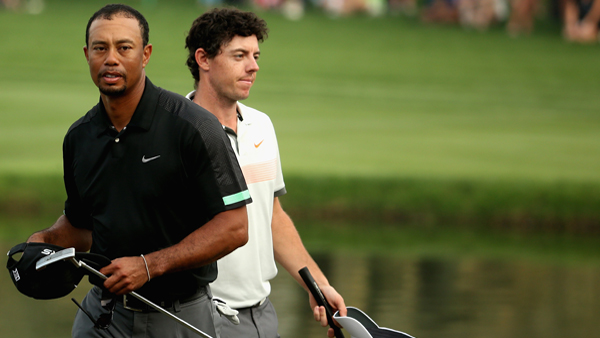 HOYLAKE, England – Rory McIlroy had everything go his way Thursday in the British Open.

A lovely summer day in England with abundant sunshine and minimal wind allowed him to attack Royal Liverpool. He made half his six birdies on the par 5s and kept bogeys off his card. And on the day Tiger Woods made a promising return, McIlroy took the lead with a 6-under 66, his best score in nearly two years at a major.

Now if he can only find a way to get to the weekend.

McIlroy either set himself up for a good run at the claret jug or another dose of Friday failures. In what already has been an unusual year for golf, no trend is more mysterious than Boy Wonder going from awesome to awful overnight.

Six times in his last eight tournaments, he has had a nine-hole score of 40 or higher on Friday that has taken him out of the mix.

“It’s not like I’ve shot good scores in first rounds and haven’t backed them up before,” McIlroy said. “I’m used to doing that. I just haven’t done it recently. We’ll see what tomorrow brings and what weather it is and try and handle it as best I can.

“Hopefully,” he said, “it’s just one of those things and I’m able to turn it around tomorrow.”

Woods also would like to keep moving in the right direction. He got off to a troubling start with two quick bogeys, nearly made another one on the fourth hole, and then looked like a 14-time major champion when he ran off five birdies in six holes toward the end of his round for a 69.

Not bad for guy who had back surgery March 31, who started taking full swings only a month ago and who had not played in a major in 11 months.

“It felt good to be back out there competing again,” Woods said.

Such pristine weather – how long it lasts is the big unknown – gave just about everyone a chance to score. Matteo Manassero broke par in The Open for the first time since he was a 16-year-old amateur. He began his round by hitting into a pot bunker, blasting out to the fairway and holing out from 160 yards for birdie. He made five birdies on the back nine, three on the par 5s.

That made him low Italian – barely.

Francesco Molinari and Edoardo Molinari have games that are nothing alike, though they shot the same score. They were in a large group at 68 along with Jim Furyk, Sergio Garcia, Brooks Koepka, Shane Lowry and Adam Scott.

Scott stands out as the No. 1 player in the world, and because he was the only player in the top 10 who played in the afternoon when the wind made Hoylake tougher. Scott went out in 31 and was slowed only by two bogeys on the back nine.

Even in tame conditions, the British Open can mete out punishment – to players, to spectators and even a golf club.

Phil Mickelson was trying to get back to even par when he hooked his approach to the 18th beyond the out-of-bounds stakes down the right side of the hole and had to scramble for a bogey and a 74. He hasn’t broken par at a major since winning at Muirfield last summer.

That still doesn’t top the bad day of Ernie Els. His opening tee shot hit a spectator in the face, and the sight of so much blood shook the Big Easy. When he got to the green, he missed a 1-foot putt, and then carelessly tried to back-hand the next one into the hole and missed that one. The triple bogey sent him to a 79.

Henrik Stenson knocked a 30-foot birdie putt off the 12th green and made double bogey, and then took two hacks out of the shin-high grass left of the 17th fairway. Walking to his next shot, he snapped his gap wedge over his thigh like a baseball player – Bo Jackson comes to mind – who had just struck out with the bases loaded.

Both Canadians in the field fared well on Day 1 of golf’s oldest major.

David Hearn shot a 2-under 70 and was tied for 19th in his debut at The Open. Graham DeLaet was close behind, carding a 1-under 71 to place him in the group tied for 33rd.

Through all this activity, two names came to the forefront – McIlroy and Woods, both trying to restore their games from different circumstances.

He met with Jack Nicklaus, and the topic of his freaky Fridays came up.

“I didn’t mention it to him,” McIlroy said. “He mentioned it to me – `How the hell can you shoot 63 and then 78?’ No, I think what we talked about was just holding a round together. And he was never afraid to make a change in the middle of the round … to get it back on track.”

Woods gave a light fist pump when he rolled in a 30-foot putt from just off the green on No. 11. He then hit a beautiful approach to 6 feet for birdie on the 12th. That put him under par in a tournament for the first time since March 9, the final round of Doral. OK, the sample size is small – that was the last tournament he played until returning to Congressional three weeks ago after back surgery.

Even so, he was playing with such rhythm late in his round that he might have wanted to keep going. That makes Friday a big day for Woods, too.