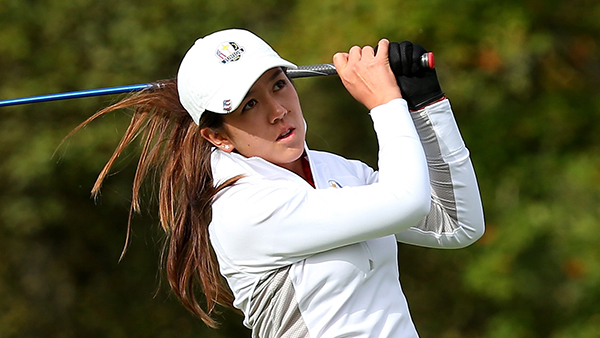 MESA, Ariz. – Hannah O’Sullivan moved into position to become the youngest winner in Symetra Tour history, shooting a 7-under 65 on Saturday to open a four-stroke lead in the season-opening Gateway Classic.

The 16-year-old O’Sullivan, a junior at nearby Chandler Hamilton, had eight birdies and a bogey to reach 12-under 132 at Longbow. She opened with a bogey-free 69 on Friday.

“I was hitting ball really well,” said O’Sullivan, who hit 16 of 18 greens and only needed 27 putts. “I was hitting some of my approach shots better than yesterday and I was rolling my putter really, really well. I was just really having a lot of fun out there.”

“I’m so excited for tomorrow,” O’Sullivan said. “It is a great opportunity and I just want to seize the moment, take it one shot at a time. I just want to keep doing what I am doing.

“This has been so much fun for me. I’m just enjoying the experience and I think that is part of the reason why my golf has been good this week. My mom is caddying, so we’ve been fooling around a little bit on the course and just having fun.”

O’Sullivan has verbally committed to play at the University of Southern California. She was a semifinalist last year in the U.S. Women’s Amateur and played on the winning U.S. team in the Junior Ryder Cup in Scotland. She won the Arizona high school titles in 2012 and 2013.

First-round leader Haley Italia was second after a 71.

Tied for 7th, Maude-Aimée LeBlanc is the top Canadian after carding a 4-under 68. Augusta James, who is making her pro debut at the event, sits T9 at 3-under. Samantha Richdale has a share of 18th at 2-under while Sara-Maude Juneau is one shot back at 1-under. Sue Kim and Brittany Henderson are tied for 35th at even par.