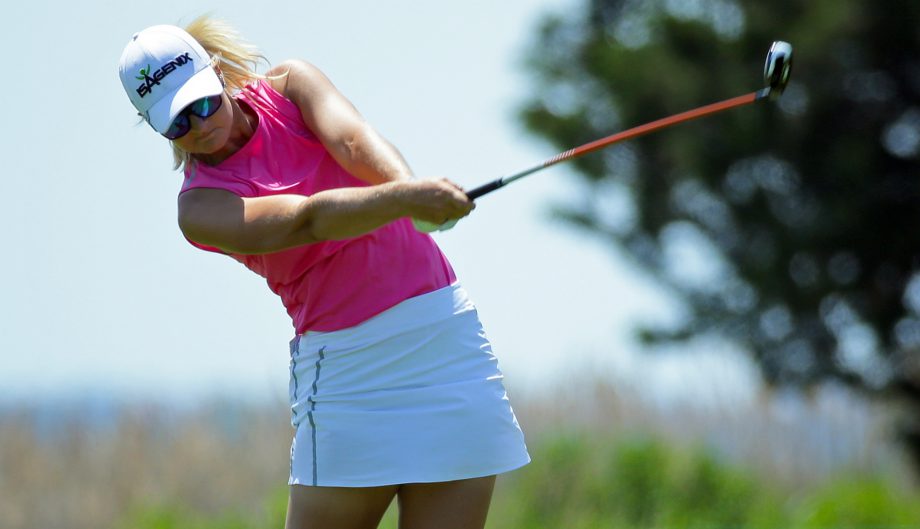 Anna Nordqvist knows how to get around Stockton Seaview – and likes the view from atop the ShopRite LPGA Classic leaderboard.

The two-time defending champion shot a 7-under 64 on Friday to take a one-stroke lead after the first round of the 54-hole event near Atlantic City.

“It just really fits my eye,” Nordqvist said. “I have so many good memories here, obviously. It almost feels like home now with a lot of supporters and a lot of friends here.”

She’s trying to join fellow Swede Annika Sorenstam as the only three-time winner.

“I feel like I enjoy this place, but at the same time, I don’t feel like I have anything to prove here,” Nordqvist said. “I am just trying to take it day-by-day. I’ve been playing good for a long time now, so just tying get everything to click at once. Happy with my start and looking forward to the rest.”

Brooke Henderson of Smiths Falls, Ont., is four strokes back after a 68. Maude-Aimee Leblanc from Sherbrooke, Que., shot an even par 71 while Team Canada Young Pro Squad teammates Augusta James of Bath, Ont., and Calgary’s Jennifer Ha were 1 over.

Moriya Jutanugarn is trying to win for the first time on the LPGA Tour, while younger sister Ariya _ taking the week off – is in position to take the No. 1 spot in the world.

“I just want to go out on the golf course and enjoy it, play my game,” Moriya Jutanugarn said. “Of course, like everybody, want to win the first tournament and it’s still my big goal, but I just want to focus what I have to do out there.”

Lydia Ko is skipping the event and will lose her No. 1 ranking to No. 2 Ariya Jutanugarn or No. 3 So Yeon Ryu. Ryu had four straight bogeys in a 74 that left her tied for 98th – and in danger of missing the cut. She needs to finish solo third or better to take the top spot.

Nordqvist had nine birdies and two bogeys. She started on No. 10 and birdied the first three holes, then birdied four of the last six holes of the day.

“It’s a tough golf course, definitely,” Nordqvist said. “The fescue is a little hard this year, and with the wind, you’re really going to have to hit solid golf shots. The greens are pretty small and it feels like you have to give yourself quite a few opportunities to make a couple.”

Nordqvist won the Founders Cup in Phoenix in March for her seventh LPGA Tour title, a homecoming victory for the former Arizona State star.

India’s Sharmila Nicollet shot a 76 after winning a fan Twitter poll to get the final sponsor exemption. She won by 9 percentage points over Blair O’Neal.