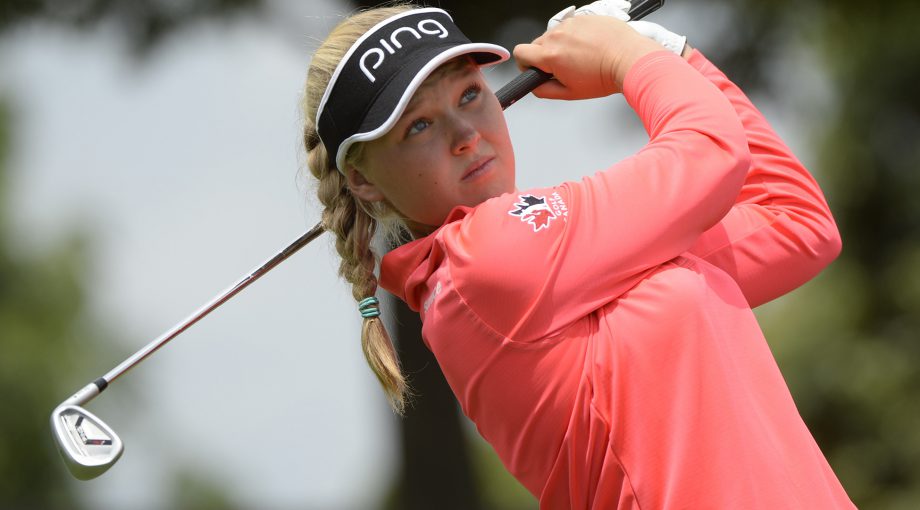 ‘Tis the time for celebration and for Canadian golf, 2015 certainly was a year to celebrate.

When David Hearn of Brantford, Ont., held the 54-hole lead at the RBC Canadian Open at Glen Abbey, we held our breath in the hope that he might be the first Canadian since Pat Fletcher in 1954 to win our national Open. Alas, it was not to be, as Australian Jason Day birdied the last three holes on Sunday to claim the title on his way to becoming the top-ranked player in the world.

While kudos go to Hearn, it was a teenager from Smiths Falls, Ont., who was the undisputed player to be celebrated this year.

In August, at the age of 17, Brooke Henderson became the first Canadian to win on the LPGA Tour since Lorie Kane in 2001. After registering multiple top-10 finishes, Henderson stormed to an eight-shot win at the Cambia Portland Classic which eventually qualified her for fulltime Tour status.

Women golfers continued to make their mark in 2015, with Casey Ward of Picton, Ont., being the medalist at the U.S. Women’s Mid-Amateur and Mary Ann Hayward of Aurora, Ont., doing the same at the U.S. Senior Amateur. Hayward, a member of the Canadian, Ontario and Quebec Golf Halls of Fame, retired this year from her post as manager of sport performance for the Golf Association of Ontario.

In November of 2014, Canada won our first Tailhade Cup in Buenos Aires, Argentina, crushing defending champions Spain by 19 strokes, thanks to stellar final rounds by Austin Connelly, a dual citizen who resides in Nova Scotia and Texas, and Corey Conners of Listowel, Ont. In 2015, the duo of Eric Banks and Tony Gil defied the odds by climbing back from a three-stroke deficit to keep the Tailhade Cup in Canada for a second consecutive year.

On the pro side, Danny King, playing out of Magna Golf Club in Aurora, Ont., solidified his reputation as one of the country’s all-time great playing pros by claiming the Titleist and FootJoy PGA Club Professional Championship of Canada crown in Arizona. The victory made King the first player to win three PGA of Canada national championships in the same calendar year, after having won the PGA Championship of Canada and teaming with Billy Walsh to capture the PGA team championship.

Eugene Wong of North Vancouver won the Ping An Bank Open in Beijing and Wil Bateman of Edmonton was victorious at the PGA TOUR Latinoamerica’s Abierto de Chile.

Much-deserved honours were bestowed on Canadians in 2015.

On Nov. 18, Dan Halldorson was felled by a massive stroke at the age of 63. He won twice on the PGA Tour, had seven Canadian Tour victories, was the only Canadian to win two World Cup team titles (1980 with Jim Nelford and 1985 with Dave Barr) and was named Canada’s top male touring professional in 1981 and 1983. From 2005 to 2011, he served as deputy commissioner of the Canadian Tour. He was a member of the Manitoba Sports Hall of Fame, the Manitoba Golf Hall of Fame and the Canadian Golf Hall of Fame. At the time of his death, he was the director of golf at Oak Island Resort in Virden, Man.

The month previous, sportswriter Arv Olson, one of Canada’s most prolific and dedicated supporters of the game, passed away at the age of 80. He chronicled the careers of the likes of Stan Leonard, Doug Roxburgh, Dawn Coe-Jones, Lisa Walters, Dave Barr, Richard Zokol and many others.

But, as the year concluded, there was some encouraging news.

Adam Svensson of Surrey, B.C., was the medalist at the Web.com Tour qualifying school in December. Taylor Pendrith of Richmond Hill, Ont., Toronto’s Albin Choi and Benjamin Silverman of Thornhill, Ont., each finished one shot out of the top 10 and ties. Mackenzie Hughes of Dundas, Ont., tied for 21st at four under and Calgary’s Ryan Yip, tied for 34th at three under.