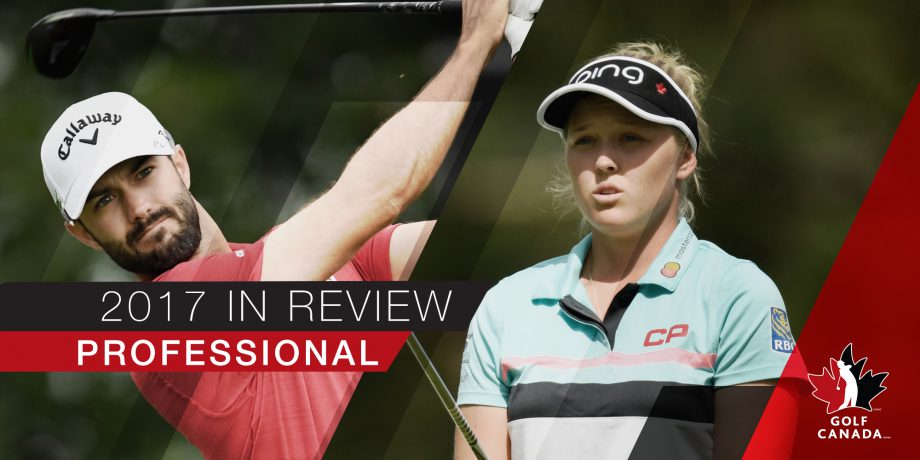 The year 2017 is drawing to a close and what a year it was for Canadian golf. Our pros won literally around the world and on just about every tour imaginable. Our amateurs of all ages made Canada proud at home and abroad. And, off the course, there were significant moments that are well worth memorializing as 2018 looms on the horizon. This is the first of a three-part series remembering most, if not all, of those memorable moments.

(If we’ve unintentionally overlooked any—there were so many, after all!—please let us know on Twitter or Facebook.

Adam Hadwin of Abbotsford, B.C, had a year to remember.  In March, he wins his first PGA TOUR title at the Valspar Championship in Florida. In January, he shoots a 13-under-par 59 in the third round of the CareerBuilder Challenge in California. His outstanding season-long performance earns him a spot in the Presidents Cup in late September.

Lock it in! @ahadwingolf collects his first #PGATOUR victory with a 1-stroke win @ValsparChamp

Team Canada graduate and Nova Scotia product Austin Connelly had a 2017 season to remember on the European Tour that included three top-10 results. The 21-year-old added a T14 finish at The British Open Championship en route to earning full status status on the European Tour for the 2018 campaign.

That’s two in a row! Congratulations to our repeat champion Jhonattan Vegas!

This edition of our national men’s Open garners even more attention than usual, due to innovations such as “The Rink,” which transforms the par-3 seventh hole into a hockey-themed fan experience complete with hockey boards, a Zamboni, bleachers, and volunteers in black-and-white referee jerseys. Even course designer Jack Nicklaus relishes the experience, taking what he says was his first shot with a hockey stick.

Sung Hyun Park wins the Canadian Pacific Women’s Open at Ottawa Hunt and Golf Club but, to Canadian fans, Brooke Henderson of nearby Smiths Falls, Ont., is the real star. Finishing T12 at her home course, she shows incredible talent and determination, firing a course-record 63 in the third round after almost missing the 36-hole cut on Friday. Tournament sponsor CP makes a $2-million donation to the Children’s Hospital of Eastern Ontario.

Our first post is dedicated to our 2017 champion, Sung Hyun Park.

Corey Conners of Listowel, Ont., earns his PGA TOUR status by finishing in the top 25 on the Web.com Tour finals money list. He joins Ben Silverman of Thornhill, Ont., who qualified for the PGA TOUR by virtue of his 10th-place finish during the Web.com Tour’s regular season.

Ryan Yip of Calgary, Albin Choi of Toronto,  and Stuart Macdonald and Seann Harlingten of Vancouver finish inside the top 45 in the final stage of the Web.com Tour qualifying school to earn guaranteed starts in 2018.

Maude-Aimee LeBlanc of Sherbrooke, Que., and Brittany Marchand of Orangeville, Ont., earn conditional status on the 2018 LPGA Tour at the final stage of qualifying school.

Brooke Henderson was named Female Athlete of the Year by both Canadian Press and Postmedia.