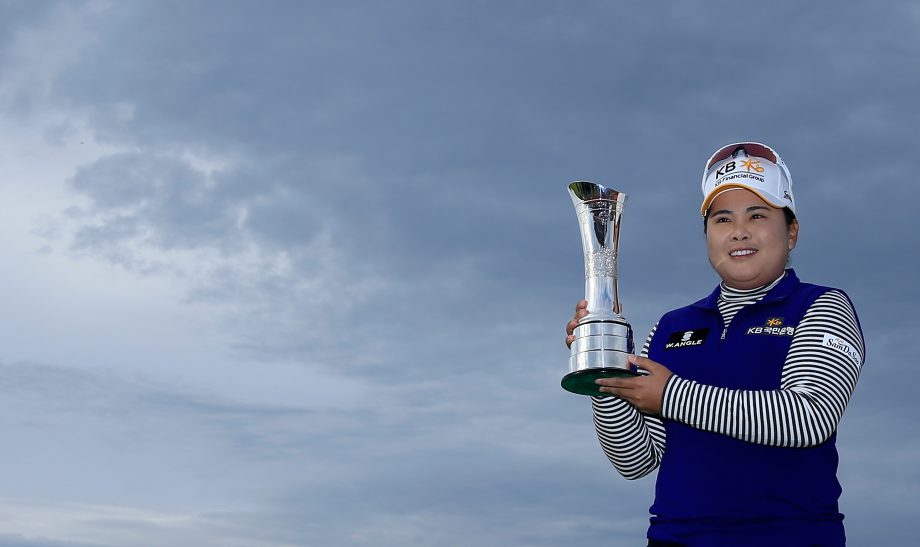 TURNBERRY, Scotland – As Inbee Park hunted down Jin-Young Ko in the final stretch of the Women’s British Open, it quickly became clear which South Korean was the rookie and which was the player about to add another chapter in golf’s record book.

The top-ranked Park picked up seven shots in her last 12 holes, pressured her 20-year-old protege so much she finally lost her nerve, and completed a 7-under 65 at Turnberry to capture the trophy she thought she may never win.

“I don’t know what else to go for now,” said Park, who has won six of the last 14 majors to cement her status as the best player of her generation.

How about ending the debate about clinching the so-called career Grand Slam?

The LPGA Tour is calling Park’s achievement just that. However, Park hasn’t won the France-based Evian Championship since it was given the status of a fifth major in 2013. She did win the Evian in 2012.

The Evian is staged next month, when Park can complete definitively what some are calling the “Super Slam.”

“I feel like I’ve won all the majors in women’s golf,” Park said, attempting to put a stop to the discussion.

“Every major was very, very special to me. But to wrap it up with the British Open is just much more special … This is definitely the golfer’s most-wanted trophy.”

Ko is just at the start of her golfing journey.

Playing her first major, her first tournament outside Asia and with a temporary, locally born caddie giving her advice on every shot, Ko began the last round tied for the lead and pulled three shots clear of a bunched-up chasing pack containing Park after a 20-foot putt for birdie on No. 10. She had already eagled the par-3 No. 7 with a 25-foot putt and rolled in a birdie of similar length at No. 8.

Her composure was stunning, considering the uncharted territory she was in. Ko had never played links golf before this week.

That was when Park made her move. She rolled in an eagle putt from 20 feet at No. 14 to close to within one shot, Ko missed a par putt on No. 13 soon after for her first bogey of the day, and Park then holed a 4-footer for birdie at No. 16 to take the lead for the first time this tournament.

No. 16 wound up being the deciding hole. Twenty minutes later, Ko’s chances of reclaiming the lead virtually ended on that par 4 when she pushed her approach shot straight into a burn. She took her fur-lined puffy coat from her caddie and looked a beaten woman for the first time this week.

Park’s birdie putt on No. 18 lipped out, but it didn’t matter. She watched on a monitor in the scoring hut as Ko – playing two groups behind – failed to make birdie on No. 17, ensuring there would be no final-hole tension.

“I really thought she was going to play really good until the end,” Park said of her friend. “I just got lucky.”

A turning point came on No. 12 when Park drove right, into thick rough. Park could barely see the ball when she approached it, but had a stroke of luck as it had settled on a drain. She was given a free drop and made par.

“That was a definite bogey there,” Park said.

Park said she needed to produce her best display of putting in two years to overhaul Ko, who is the latest on a conveyor belt of talent coming from the South Korean tour.

Ko was bidding to become the third first-time major winner from South Korea in the last five majors, after Hyo-Joo Kim at the Evian last year and In-Gee Chun at the U.S. Women’s Open last month.

The 27-year-old Park is the second-youngest player to win the four traditional majors. Webb was 26 when she completed the haul in 2001.

The 18-year-old Lydia Ko was seeking to become the youngest major winner, beating the record of Morgan Pressel by seven months. She was three shots behind her namesake Ko, only to take two shots out of the greenside bunker at No. 12 and make a double-bogey.

Golf Canada Young Pro Squad member signs for an even-par round of 72 and fellow Canadian Alena Sharp posted a 2-over 74.