Major champions have signature shots, and shots that were special to them 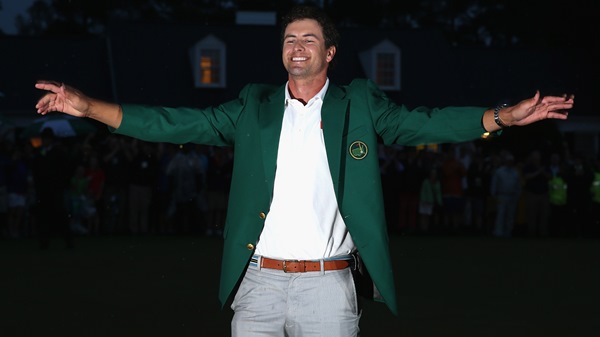 The putt that Adam Scott thinks about most wasn’t the one that won him the Masters. The best shot Justin Rose hit at the U.S. Open didn’t even stay on the green.

The majors were filled with great shots, even if they didn’t produce the obvious outcome.

Scott’s putt on the 18th at Augusta National ultimately got him into a playoff when Angel Cabrera answered with a great birdie of his own. Rose’s 4-iron into the 18th at Merion ran off the back of the green into a collar. It was a relatively simple up-and-down from there, though such a great shot deserved better.

Every major has a signature shot. Some are easier to define than others.

And with every major champion, there is another shot that is just as pleasing to them, even if it doesn’t get as much attention:

The putt that made Scott the first Australian in a green jacket was a 12-footer for birdie on the second playoff hole at No. 10. Scott, however, believes the defining moment of this Masters was the 20-foot birdie putt he made on the 18th in regulation.

Adding to the significance of the putt was his reaction. Scott, the image of GQ, transformed into WWF as he screamed with all his might, “C’mon, Aussie!”

“No matter what I do in my career from now on, I think it’s going to be the one I’m remembered for,” Scott said. “Even if I do happen to win other big tournaments or majors, it might not quite be everything that Augusta was.

“There’s no doubt, as I look back in my career, that’s going to be the one moment I’ll think of first as a far as a signature moment.”

He won’t forget the 6-iron, either, as good as any shot he struck all week.

On the second playoff hole, Scott had 191 yards from a hook lie in the 10th fairway. Cabrera already was on the green with a reasonable look at birdie.

“I didn’t want to sling a 7-iron in there,” Scott said. “It wasn’t the right shot. The atmosphere was heavy and I was jacked up, but I had to hold a 6-iron. Somehow, I managed to hit such a beautiful shot. If you asked me to do it right now, I couldn’t. But I had it at that moment. Absolutely, it’s the best shot of my life right now.”

Rose had a one-shot lead on the 18th hole at Merion. He was 229 yards from the pin, and just 15 feet behind the plaque that commemorates Hogan’s 1-iron into the 18th during his 1950 U.S. Open victory. While it was not as historic as Hogan’s moment, it was the signature shot of his first major.

“It has to be the 4-iron into 18, given the poignancy of the hole, the iconic photograph we’ve all grown up with and the 18th hole of a major,” Rose said. “That was the one that put it away.”

Adding to the pressure was the wait. Luke Donald was taking a penalty drop, leaving more time for Rose to contemplate the consequences of the shot.

“I appreciated the situation I was in and relished it,” Rose said. “And luckily, the shot came off. I drilled it. It came off perfectly.”

He believes the 18th hole played a big role earlier in the week. Rain kept the second round from being completed on Friday, and Rose was in the last group that managed to finish without having to return Saturday morning. He watched Phil Mickelson ahead of him make birdie to share the 36-hole lead. Rose missed the fairway, hacked it out of rough and had 115 yards to a pin that was just over the false front, a shot that required close to perfection.

He delivered, hitting wedge to 7 feet.

“It was pretty dark by this time,” he said. “But I wanted to hit the putt. Even if I missed, the advantage was there to sleep in. It was a slippery, downhill, left-to-righter for a 69 to stay even par. From a momentum point of view, just finishing and giving myself time in bed for the rhythm of the week … that was big.”

Mickelson didn’t hesitate when asked for the signature shot of his British Open victory _ the 3-wood on the par-5 17th that set up a two-putt birdie.

“Very simply put, there was no margin for error,” he said. “If I miss it a little bit to the right, it goes in a bunker and I have a very difficult par. I have to go out sideways and try to get up-and-down for par. If I miss it left, it’s the worst rough on the golf course and I could lose my ball or have an unplayable lie. But if I hit it perfectly, there’s a good chance I could have a two-putt birdie. And that’s what happened.

“I hit it dead perfect at the time I needed it most,” he said. “If I made birdie, I felt like I would win.”

Mickelson’s closing 66 at Muirfield is considered the best round of the year, and one of the best final rounds in any major. He made birdie on four of the last six holes. As much attention as that 3-wood receives, Lefty was equally pleased with a 5-iron into 8 feet for birdie that started his big run.

It was on the 13th hole, 190 yards and dead into a strong wind to a narrow green.

“If you miss it at all, the ball gets blown off sideways, and you saw it with just about every player behind me,” Mickelson said. “I hit it so solid and perfect through the wind the ball just soared. It was the prettiest shot.”

Jason Dufner had a two-shot lead with three holes to play. Leads like that can disappear quickly at a major, especially with the tough, two closing holes at Oak Hill.

Jim Furyk hit his approach to 10 feet on the 16th, easily birdie range. Dufner followed with a sand wedge from 105 yards that spun back to a foot, which stands out as his signature moment at the PGA Championship (though a case could be made for the love tap he gave his wife when it was over).

“I was trying to take it a little bit past the pin on the right,” Dufner said. “Obviously, with a wedge in hand, I was thinking it could be a makeable birdie effort. Inside a foot is great for me because I struggle with the putter.”

Not so obvious – except to Dufner – was how he played the par-3 11th hole for the week. At 226 yards, it was the sixth-toughest hole at Oak Hill. Dufner never had a birdie putt outside 20 feet in all four rounds, and he played the hole in 1-under par for the week.

“It was one of the tougher holes, and I made it easy for me,” he said. “The 16th is the shot people are going to remember. The one people will forget about is to play that hole (No. 11) in 1 under and never sweat a bogey. That’s a pretty good deal.”