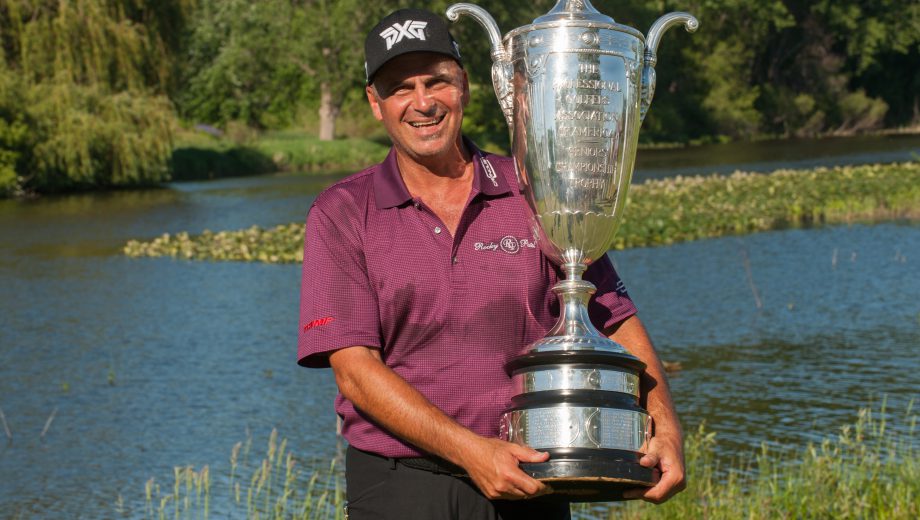 BENTON HARBOR, Mich. – Rocco Mediate holed out from a greenside bunker for birdie on the par-3 17th to wrap up a record-setting, wire-to-wire victory Sunday in the Senior PGA Championship.

Smoking cigars during the round, the 53-year-old Mediate closed with a 5-under 66 – holing a 15-footer for par on the last at Jack Nicklaus-designed Harbor Shores, for a three-stroke victory over two-time defending champion Colin Montgomerie.

Mediate finished at 19-under 265 to break the tournament record of 268 set by Sam Snead in 1973 at PGA National. The six-time PGA Tour winner became the first wire-to-wire winner in the event since Nicklaus in 1991 at PGA National.

Mediate matched the course and tournament records with an opening 62 and added rounds of 66 and 71 to take a two-stroke lead over Montgomerie into the final round.

Mediate broke through with the PGA Tour Champions major victory nearly eight years after losing the 2008 U.S. Open at Torrey Pines to Tiger Woods on the first extra hole after an 18-hole playoff.

Mediate won for the third time on the 50-and-over tour, with the first two coming in 2013.

Montgomerie shot a 67 – and matched Snead for the second-best total in tournament history. The 52-year-old Scot won in 2014 at Harbor Shores and last year at French Lick in Indiana. He also won the 2014 U.S. Senior Open.

Bernhard Langer tied for third at 13 under in a failed bid to become the first player to win all five PGA Tour Champions majors. The 58-year-old German won the Regions Tradition last week in Alabama for his sixth senior major title and 100th worldwide victory. In Alabama, Langer joined Nicklaus as the only players to win four different senior majors.

Rod Spittle of St. Catharines tied for 12th at 10-under while compatriot Stephen Ames took 44th place at 1-under.