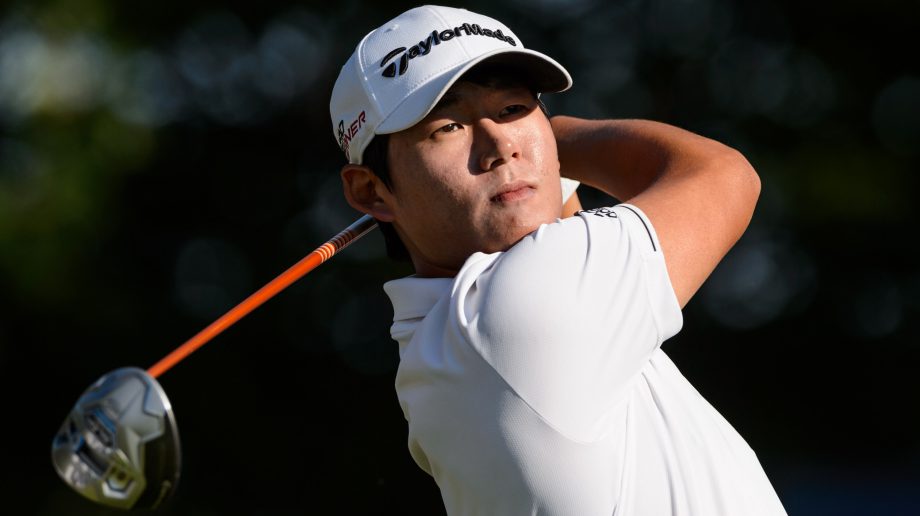 CHENGDU, China — Canada’s Justin Shin shot a final-round 69 at last week’s United Investment Real Estate Wuhan Open to earn a top-10 in defense of his 2015 title. That final round, apparently, was a harbinger of things to come.

At the Cadillac Championship, Shin avoided bogeys all afternoon, made six birdies and added an eagle on his way to a first-round, 8-under 64—matching the career-low score he shot in the second round during his 2015 victory in Wuhan. Shin holds the 18-hole lead at Chengdu Poly Golf Club by two strokes over Americans Jarin Todd and Sejun Yoon, South Korea’s Geon Ha Kim, China’s Zihao Chen and Australia’s Mitch Davis. Chen continued his strong start to the season after finishing runner-up a week ago in Wuhan.

Zecheng Dou is going for this third consecutive title to win the season, and he did nothing to hurt his chances. Dou, the Tour’s leader in birdies made, made an additional six Thursday with a lone bogey on his way to a 5-under 67. He’s tied for eighth with nine others on the bunched leaderboard.

If Dou had one flaw in his 2016 season, it was slow starts. He opened with a 1-over 73 in his first tournament and a 2-over 74 in Wuhan. No such problems to start the Cadillac Championship.

Yet the day belonged to Shin, who was inside the top five on the Order of Merit for a considerable period of 2015 before finishing No. 6 and just missing earning Web.com Tour membership. Shin is following his pattern of a year ago, with another solid start to his season. In 2015, his victory and one of his two other top-10s came in his first six tournaments.

“After the final round last week, I was feeling pretty good heading into this week,” Shin said. “On the range before my round, I was hitting it well. I hit a lot of straight shots today and gave myself a lot of birdie chances out there.”

Shin birdied his first hole of the day and added three more, on Nos. 6, 7 and 9. His chip-in birdie to close his front nine was particularly noteworthy, Shin explained. After missing the green and facing a difficult chip, making bogey on the par-4 entered his mind. “The key thing for me was chipping in from the front of the green. I was thinking being only 2-under going to the back nine, and that got me to 4-under. So it was a turning point for me.”

The South Korea native, who spent his formative years outside Toronto and played collegiate golf at New Mexico State, kept his momentum going on the par-5 12th when he nailed an 18-foot eagle putt to push him to 7-under. “I just wanted to keep patient out there. There is more room off the tee (than in Wuhan), so it’s all about second shots out here because the greens are pretty undulated,” Shin added. “You have to put [your approach shots] in the right spots, and that will make it a lot easier. I was pretty good with my distance control out there, and that gave me a lot of good chances for birdie.”

Indonesia’s Rory Hie was one of the nine who posted a 5-under 67. He felt like his score could have been a stroke or two lower. Despite the six birdies he made Thursday, he still missed three 10-foot birdie putts on his back nine, a 12-footer at No. 7 and a three-footer at No. 8.

“I was just misreading the greens in the afternoon,” Hie noted. However, the former University of Southern California player also rolled in a 40-foot downhill putt on No. 6 for birdie, a happy outcome when he gladly would have walked away from that hole with a par.

“I was really thinking about two-putting it. But that’s the way it is in golf. I missed some good putts for birdie but made that one. So it sort of evened out.”

Hie was in contention through 54 holes last week at the United Investment Real Estate Wuhan Open. He was in fourth place ready to make a run at Dou until the sixth hole of his final round. Hie made a 10 on the par-4, and he tumbled all the way into a tie for 18th. “I made a mess there,” he said with a laugh. Even with that disappointment from a week ago, Hie walked away Thursday in good spirits. “I’m playing pretty well, and I’m happy.”

China’s Huilin Zhang made a back-nine push and briefly held the lead until a 17th-hole double bogey knocked him back into a tie for eighth.