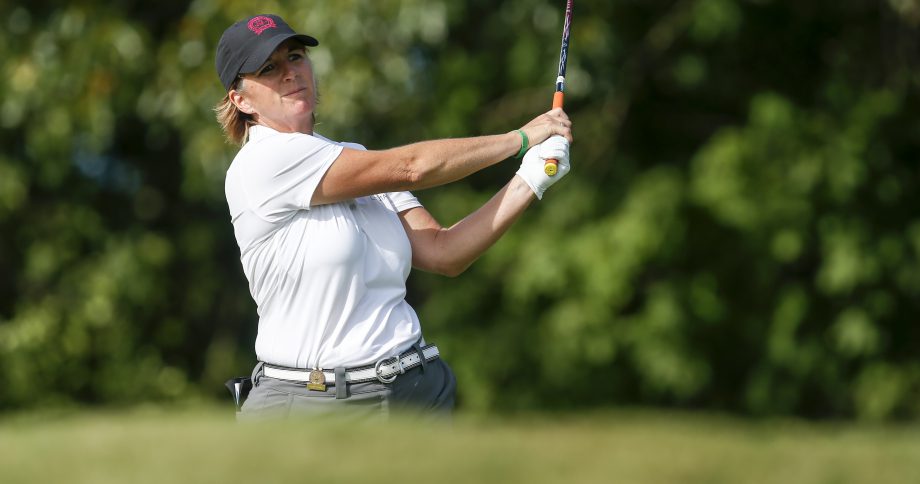 Judith Kyrinis, of Canada, already owns a triple crown of national championships this year. She is going for the grand slam at the 2016 U.S. Senior Women’s Amateur.

The winner of the 2016 Canadian Women’s Mid-Amateur, Mid-Master and Senior championships, as well as the runner-up in the 2014 U.S. Senior Women’s Amateur, Kyrinis, 52, shot even-par 74 on Saturday, which gave her a two-shot lead after the first round of stroke-play qualifying at the 6,049-yard Wellesley (Mass.) Country Club.

Marilyn Hardy, 54, of Houston shot 76 and five players, including Laura Coble, 52, of Augusta, Ga.; Lynn Cowan, 53, of Rocklin, Calif.; and Lisa McGill, 57, of Philadelphia, are three strokes behind Kyrinis.

“I left a couple right on the lip today,” said Kyrinis, who made three birdies but had additional opportunities, including on her final hole of the day, the par-5 ninth, where she missed a 7-footer for birdie. “But it’s good to get it close to the hole around some of these pins.”

Featuring sloped greens, several of which sit well above the fairway, Wellesley requires precise approach shots, which were difficult to control in the wind.

“It’s playing tough,” said Coble, who lost to Kyrinis in the Round of 32 of last year’s championship. “It’s fair, but the winds are kind of tricky and the greens are pretty sporty. You just have to place your ball in the right area to not have to play defensively.”

One of 13 national championships conducted annually by the United States Golf Association, 10 of which are strictly for amateurs, the U.S. Senior Women’s Amateur Championship consists of 36 holes stroke play followed by six rounds of match play, with the 18-hole championship match scheduled to take place on Thursday, Sept. 22.

The championship match falls on the first day of autumn, and Kyrinis would like to welcome the new season with a continuation of her extremely successful summer. The nurse from Thornhill, Ontario, won her second consecutive Senior Women’s North & South Amateur at Pinehurst (N.C.) Country Club in mid-August. Less than two weeks later, she won her three of her country’s national championships, which were held concurrently at Wolf Creek Golf Resort in Alberta.

“Those were significant wins,” said Kyrinis. “So I was coming here with a lot of confidence.”

Those victories took place in stroke-play events. But as her Round-of-64 loss to Susan Wooster – despite besting her in stroke-play qualifying by six strokes – in last week’s U.S. Women’s Mid-Amateur at The Kahkwa Club demonstrated, a match-play championship requires a different path to victory.

While earning medalist honors is notable, it is rarely a prerequisite for victory. The last stroke-play medalist to win this championship was Carol Semple Thompson, in 2002. For the field, the goal on Sunday is to find a way into the top 64 and a spot in the match-play bracket.

Cohn weathered a start in which she made bogeys on four of her first eight holes, rebounding to make birdies on the 10th and 12th holes to shoot 3-over 77.

Other notable competitors who placed themselves in position to advance to match play include two-time champion Ellen Port, 54, of St. Louis, who shot 4-over 78; defending champion Karen Garcia, 53, of Cool, Calif., who shot 79; and 2010 champion Mina Hardin, 56, of Mexico, who shot 80.

Hometown favorite Pam Kuong, 55, of Wellesley Hills, Mass., attracted the largest crowds during her round of 10-over 84. No doubt, they will return on Sunday to cheer on last year’s finalist as Kuong continues her attempt to qualify for match play in the second round of stroke play, which is scheduled to begin at 7:30 a.m. EDT.