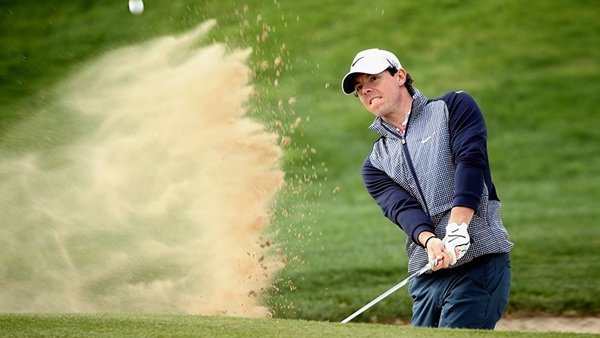 DUBAI, United Arab Emirates – Rory McIlroy took another step toward regaining his form Thursday with his lowest score in more than three years, a 9-under 63 while playing with Tiger Woods to take a two-shot lead in the Dubai Desert Classic.

McIlroy played bogey-free in ideal scoring conditions on the Maglis course at Emirates Golf Club, picking up six birdies and an eagle during a 10-hole stretch in the middle of his round. He easily upstaged Woods, who was five shots behind after a 68.

Edoardo Molinari made an eagle on the par-4 second hole on his way to a 65. The group at 66 included Stephen Gallacher, the defending champion who also played in the feature group with Woods and McIlroy.

McIlroy had his best score since a 63 in the Hong Kong Open in November 2010.

The 24-year-old from Northern Ireland was No. 1 in the world at this point a year ago, but went through a troublesome season adjusting to new equipment and coping with his first prolonged slump. He didn’t win a tournament until the Australian Open in December. In his 2014 debut two weeks ago, McIlroy finished one shot behind in Abu Dhabi, where he was given a two-shot penalty in the third round for not taking proper relief.

McIlroy said he was “very close” to playing his best and that this was “another step up from Abu Dhabi” the way he controlled his irons.

McIlroy ran off three straight birdies early in his round and made the turn on the back nine in 32. He made eagle on the par-5 third hole with a 5-wood into 8 feet.

Woods managed to hit just half of the fairways in regulation, but taking only 25 putts helped him. The world’s No. 1 player also made his first birdie of the year on a par 5, his opening hole at No. 10. Woods did not birdie any of the 12 par 5s he played last week at Torrey Pines, where he missed the 54-hole cut.

“I felt like it was a good day,” Woods said. “I could have got a couple more out of it, just by making a couple putts from about ten feet or so but I hit a lot of good putts which was nice. Last week I didn’t do it and it was nice to actually play well again.”

Woods is a two-time winner in Dubai, which is celebrating its 25-year anniversary. McIlroy won his first European Tour event at Dubai in 2009. Among the past champions, Fred Couples, Mark O’Meara and Colin Montgomerie each shot 70, as did Race to Dubai winner Henrik Stenson.

Molinari, who took a bogey on the par-5 18th, bounced back on the short second hole when he hit a big drive to just short of the green and then chipped in from about 35 yards for an eagle.

“It was a good day,” Molinari said. “I’ve been hitting the ball very well lately, and especially off the tee.”

But the day belonged to McIlroy, who has a chance this week to build some momentum. He called it his best round since a 66 to beat Adam Scott in Australia at the end of last year, and while McIlroy shot 64 in Boston last September, “it’s definitely the lowest round I’ve shot in a while.”

Gallacher said he was happy with a 66, especially playing alongside two of the biggest stars in golf. He played an 18-hole exhibition with Woods and Couples earlier this week.

“I played alongside Tiger on Tuesday, so I knew what to expect, and it was just a matter of getting on with my own game,” Gallacher said. “So Tiger’s been fine, but then Rory’s been brilliant.”