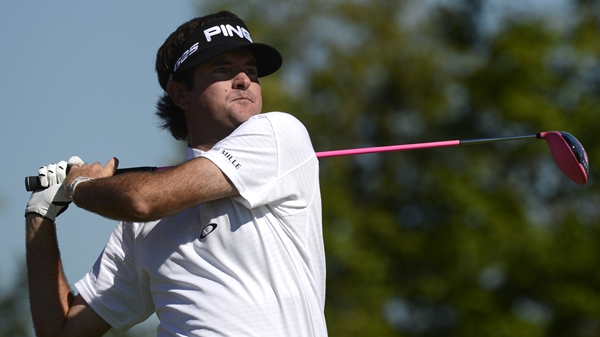 SCOTTSDALE, Ariz. – Phil Mickelson made it to the weekend in the Phoenix Open. Another popular left-hander and a fellow former Arizona State player set the pace.

A week after withdrawing from Torrey Pines because of back pain, Mickelson shot a 4-under 67 in his afternoon round Friday at cool and breezy TPC Scottsdale. The defending champion was eight strokes behind leaders Bubba Watson and Matt Jones.

Indeed, the three-time champion has shot 11-under 60 twice in the event, in the second round in his 2005 victory and last year in the first round.

Watson, the long-hitting left-hander who won the 2012 Masters, followed his opening 64 with a 66 to reach 12 under. Jones, the Australian who played at Arizona State and lives in Scottsdale, had his second straight 65.

“It’s right where I want to be going into the weekend,” Watson said.

The 43-year-old Mickelson felt soreness in his back two weeks ago in Abu Dhabi, and pulled out at Torrey Pines after making the 36-hole cut. He flew to Georgia to see back specialist Tom Boers and was told his facet joints locked up.

“My back feels great,” Mickelson said. “Like I said, it was a simple fix. I just don’t want to overdo it.”

Lefty saved par with a 12-footer on the par-5 15th hole after hitting his second shot into the water. On Thursday in his opening 71, he reached the green in two and three-putted for par from about the same distance.

Harris English and Greg Chalmers shot 67 to reach 10 under, and Pat Perez, Kevin Stadler and Hideki Matsuyama were 9 under. Matsuyama had a 67, and Perez and Stadler shot 68.

Watson opened with a birdie on the par-4 10th. In 50-degree conditions with the wind hours away on the cloudy day when it barely reached the mid-60s, he hit a 315-yard drive to set up a 70-yard shot that he hit to 4 feet.

Wearing lime greens shoes and an otherwise all-black outfit, Watson bogeyed the par-3 seventh after driving right. He made a 30-foot birdie putt on the par-4 eighth and closed with a bogey on the par-4 ninth after his wedge shot spun off the green.

“I had two sloppy bogeys coming down the stretch, but I will take it,” Watson said.

Jones birdied four of his last six holes. He also played in the morning.

“We definitely got the good side of the draw,” Jones said.

Despite the cooler weather, the tournament set an attendance record for the third straight day with an estimated crowd of 123,674. Since Monday, an estimated 313,054 people have attended the event. The seven-day record of 538,356 was set in 2008.

It also was expected to be cool over the weekend, with highs in the low-60s.

Jones is a regular at the course, but doesn’t consider that an advantage.

“The golf course is so different tournament week than it is when you play out here regularly,” Jones said. “It’s a lot harder, a lot faster. The greens are a lot quicker. The pins are a lot more tucked out here. So, it’s like a new golf course when you come here for a tournament.”

Brandt Snedeker had the best round of the day, a 64 in the morning to reach 8 under.

“My putting, plain and simple,” Snedeker said. “I hit the ball extra good yesterday and had some of the worst putting I had all year. Today, I kind of did the opposite.”

La Quinta winner Patrick Reed also was 8 under after his second 67. Playing alongside Watson, Reed hit to a foot for a birdie on the par-3 16th stadium hole.

Making a statement about the PGA Tour’s decision to ban caddie races to the green on the rowdy hole, players Robert Garrigus and Morgan Hoffman sprinted to the putting surface. Garrigus made a birdie, and Hoffman had a bogey.

Keegan Bradley followed his opening 66 with an 80, The score was the second-highest of his PGA Tour career, following an 82 last year in the Masters. He made a triple-bogey 8 on No. 3 and had eight bogeys and two birdies.

David Hearn of Brantford, Ont., is eight shots back, with a 1-under 70 leaving him at 4-under 138 for the tournament. Graham DeLaet of Weyburn, Sask., is another stroke back after turning in a 72.

The rest of the Canadian contingent missed the cut, which was 1-under 141. Mike Weir of Brights Grove, Ont., finished at 145. Amateur Ki Taek Lee of Vancouver wound up at 147, while Calgary’s Stephen Ames was another shot back.