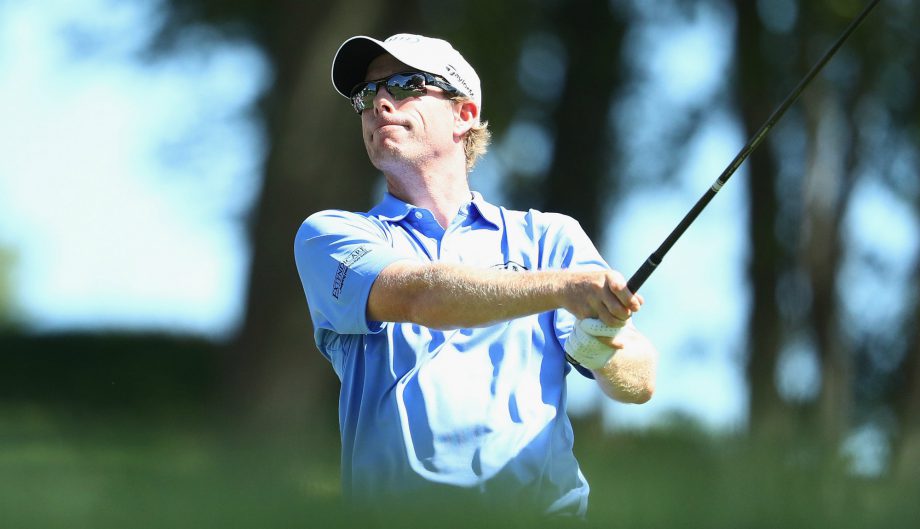 Jordan Spieth needed an extra hole, a little bit of luck and an amazing final shot to finish off a wire-to-wire victory in the Travelers Championship.

The two-time major champion holed out from 60 feet for birdie from a greenside bunker on the first hole of a playoff with Daniel Berger on Sunday at TPC River Highlands.

The 23-year-old Texan joined Tiger Woods as the only PGA Tour players with 10 victories in the era since World War II. Woods won 15 times before he turned 24.

“That was one for the ages,” said Spieth, also the winner at Pebble Beach in February.

Spieth held a one-stroke edge after each of the first three rounds. He closed with an even-par 70 to match Berger – who birdied three of the final six holes for a 67 – at 12-under 268.

Berger, the Memphis winner two weeks ago before missing the cut last week at the U.S. Open, just missed a 50-foot putt from off the 18th green left that would have forced a second playoff hole.

“Jordan does Jordan things,” Berger said. “So there’s not really much you can say. I’m obviously disappointed, but happy to be in the position I was in today.”

Berger began the round in third place, three shots back. He tied Spieth for a lead with a 5-foot birdie putt on 15 as Spieth was making bogey on 14 and tied him again with a birdie from 8 feet at 17.

The pair, playing a group apart, both hit their approach shots on 18 into the same greenside bunker. Both chipped out close to the hole and both saved par to force the playoff.

Berger hit his drive on the first playoff hole left and into the crowd behind a fairway bunker. Spieth seemed to clip a tree left landing in the fairway but about 150 yards short of his normal drive and 230 yards from the hole.

Spieth’s approach fell into bunker. Berger’s ran off the green to the left.

Spieth had to back up after hitting his bunker shot to see the hole. When the ball rolled straight in the cup he threw his club and did a flying chest bump into caddie Michael Greller.

“If I was in Berger’s shoes, I be cursing Jordan Spieth right now for the break off the tee and then holing a 30-yard bunker shot, that’s a lot of luck,” Spieth said.

Spieth didn’t waste any time extending his lead to three strokes Sunday. He hit his approach shot to 6 feet on the first hole and made the birdie putt, then made a 5-footer at No. 2. But those would be his final two birdies until a 16-footer on the 15th hole.

He also survived a couple of big scares. The first came when his drive on 13 went right but stuck on the side of a hill to stay out of the water. He missed a 7-foot birdie putt, but saved par.

He then hit his tee shot on the 15th left, just avoiding the water and the hazard line in the rough. He chipped to the middle of the green and made a 16-foot putt for birdie, which he thought he had missed. .

His second shot at 17 also looked as if it might hit the course’s signature lake, but landed just on the edge of the green and he made par.

“That’s a lot of luck,” Spieth said. “But I took advantage of the good breaks and am happy to come out on top.”

He’s the third player to go wire-to-wire alone in the lead at the Connecticut event. Gene Littler did it in 1959 and Tim Morris in 1982. Spieth’s only other wire-to-wire win was the 2015 Masters.

Sunday’s win was also his first win in a tournament debut. The last player to win in Cromwell in his first start was Phil Blackmar in 1985.

David Hearn (69) of Brantford, Ont., was the low Canadian, tying for eighth at 8 under.

Boo Weekley, who began the round a shot back in second place, shot 37 on the back nine to tie for fifth at 9 under, despite the support of a large gallery, which could be heard cheering “Boooo!” and “Boo-S-A!” every time he did something good.

Rory McIlroy tried to find his short game this week and used his third putter Sunday to help him shoot a 64, his lowest round on the tour this season. He tied for 17th at 6 under.

“I must say I felt a little more comfortable on the greens than I did the previous three days,” McIlroy said. “So, this might be one that stays (in the bag) for a few weeks.”

Defending champion Russell Knox had a poor round, with six bogeys on his first 10 holes. He shot a 73 to finish at even par.

Greyson Murray had the tournament’s only hole-in-one, acing the 177 yard eighth hole with an 8-iron. It also was the first on tour for the 23-year-old North Carolinian. He shot a 68 to finish at 5 under.