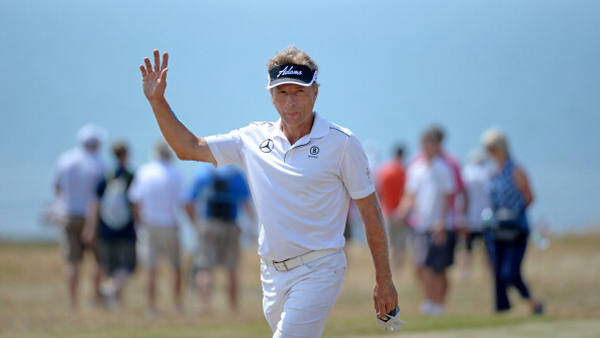 BRIDGEND, Wales  — Bernhard Langer has a seven-stroke cushion to take into the third round of the Senior British Open after shooting a 5-under 66 Friday to add to his opening 65.

The German is on 11-under 131 overall at a sunny Royal Porthcawl with Scotland’s Colin Montgomerie and South African-based Englishman Chris Williams tied for second on 4-under 138.

Montgomerie shot 66 while Williams added a 70 to his opening 68.

Watson had a faultless round of 66 with three birdies, an eagle at the 18th and no dropped shots.

Langer was beaten in a playoff by Mark Wiebe of the United States in last year’s championship at Royal Birkdale after blowing a two-stroke lead on the final hole when he failed to get out of a greenside bunker.

“It still hurts when I think about it,” Langer said. “If you put me in that situation a hundred times, I think I would win 98 or 99.”

Langer started with a bogey five at the opening hole when he pulled a 4-iron into a bad lie, hit his second over the green and didn’t get up and down.

He recovered with three straight birdies from the fourth, hitting a sand-wedge to six feet, a 3-iron to seven feet and chipped his third to three feet on the par-five sixth and sank it.

“I played very aggressive and smart today,” said Langer, who was champion at Carnoustie in 2010. “I missed a couple of opportunities early on but I’m very pleased overall. Playing good golf on a great course is a lot of fun. But you have to be very careful, very smart and hopefully execute properly.”

Montgomerie hit back from dropping strokes at the first two holes to post six birdies in the next seven, including five on the run from the fifth, for 31 on the first nine holes. He then got two more on the way and just one dropped shot.

Despite the impressive round, he wasn’t hopeful.

“I’ve got a massive mountain to climb to catch Bernhard,” admitted Montgomerie.

Tway, only two behind Langer overnight, got to 5 under with a birdie at the sixth, but then slipped to level par before closing with two birdies.

Fred Couples had to settle for a par 71, while Tom Pernice Jr. came back from an opening 78 to bag eight birdies and drop just one shot for 64 and the best round of the tournament so far.

Wiebe, playing with Langer, made an early exit after shooting 77 for an 11-over 153 – some 22 strokes worse than the man he beat last year.