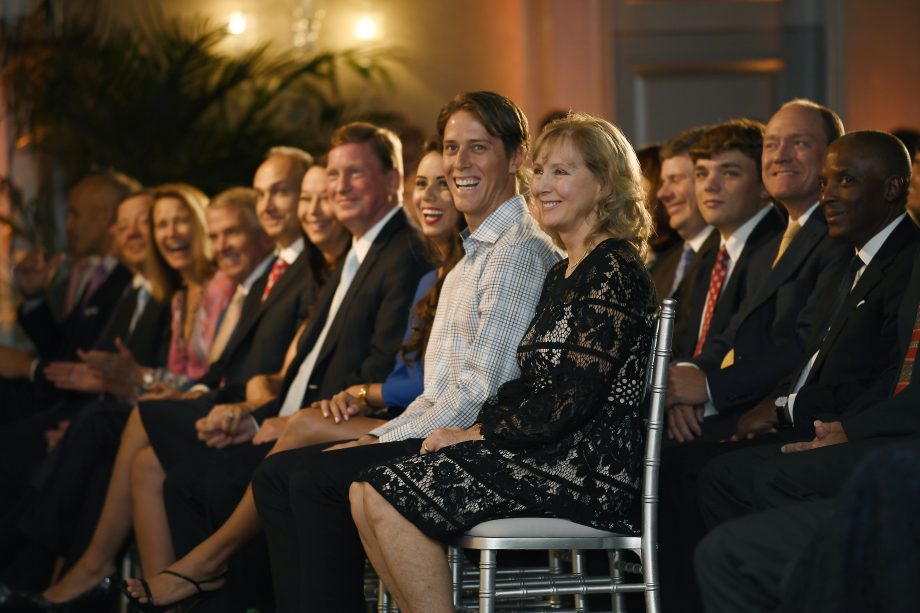 Aaron Stewart was always around golf even when he wasn’t heavily invested. Now he’s involved in ways he never imagined.

Stewart, the son of late three-time major champion Payne Stewart, has been appointed tournament director of the Diamond Resorts Tournament of Champions in Orlando, Florida. The season opener on the LPGA Tour is Jan. 16-19 and features two events in one – 72 holes of stroke play for LPGA winners the last two seasons and celebrities competing in a Stableford format.

“I’m really excited to be with the tournament side of things, back in the golf industry,” Stewart said. “And I’m still with the company I grew up with.”

He is approaching the 20-year anniversary – Oct. 25, 1999 – of his father travelling to Texas when the jet lost cabin pressure and flew uncontrolled across the country until crashing in South Dakota. Stewart was the reigning U.S. Open champion. His son was 10.

He started playing seriously a few years later and decided if he was going to be good, he would have to put in the time. He went to SMU, his father’s alma mater, with every intention of trying to make it to the next level.

“I ended up going a different route,” Stewart said. “I didn’t have the desire to play professionally. I was a little burned out, to be honest.”

He returned home to Orlando and worked for the Tavistock Group and then was hired by Diamond Resorts through an intensive training program. This job was more about marketing, taking him to Las Vegas and California. He married and took a year off to travel, returned to Diamond Resorts in March as part of the sports marketing team involved in the Tournament of Champions and was elevated last month to executive director.

It was a different path, much like the LPGA Tour event he now runs.

The tournament began as a one-day charity event for Brian Gay, geared toward raising money toward health causes. It became an unofficial event for the PGA Tour Champions, and now it offers a unique blend of LPGA winners and celebrities, along with giving the LPGA Tour a winners-only event it had been lacking.

Stewart always remained connected to tour golf in some capacity. The Payne Stewart Award has become one of the most significant honours on the PGA Tour, and Stewart goes to Atlanta every year for the televised ceremony during the Tour Championship.

He was in Las Vegas last week and got together with Jim Furyk, who played in the 1999 Ryder Cup with his father and won the Payne Stewart Award.

Now it’s about running a season opener for the LPGA Tour.

“It makes each week really exciting for us to see if we’ll have a new person on the roster,” Stewart said Monday, one day after Cheyenne Knight won her first LPGA Tour event to qualify for the season opener. “It’s a great transition into the season. We’re thrilled to be in that position.”

Four tournaments into the PGA Tour season are enough to raise questions about captain’s picks for the Presidents Cup – Joaquin Niemann of Chile winning big at the Greenbrier, and Kevin Na winning at Las Vegas for his second victory in five months.

Na said he was hopeful of a text from U.S. captain Tiger Woods about his Vegas win in a playoff.

He still is somewhat of a long shot. Na was No. 22 in the standings. Woods has four picks, and among those well ahead of Na were Match Play winner Kevin Kisner, U.S. Open champion Gary Woodland, Northern Trust winner Patrick Reed, along with Rickie Fowler and yes, Masters champion Woods.

Na says injuries limited him to only 19 starts – he has played at least 26 times each of the last five years – and he missed the second FedEx Cup playoff event to be home for the birth of his son.

“I was a little behind on the points, but I got two wins in this calendar year,” Na said. “So hopefully, he’s keeping an eye on me. I could make some putts. I’m a good match play player. I keep trying to sell myself. Hopefully, he considers me.”

Woods and International captain Ernie Els make their selections after the HSBC Champions ends on Nov. 3.

The LPGA Tour takes a week off before heading to Asia for a month of limited field, no-cut events in which only players who earn spots in the fields – no sponsor exemptions – can earn points toward trying to be among the top 60 reaching the season-ending CME Globe Tour Championship.

The final full-field event in Texas proved plenty big. Cheyenne Knight won for the first time and moved to No. 65 on the money list, which will get her into Asia events. For others, it was a matter of keeping their cards. Stephanie Meadow made an 18-foot birdie on the last hole that was just enough to finish No. 99 on the money list.

The top 80 effectively have full cards and top 100 have status secured without having to go the Q-Series, consecutive 72-hole events at the end of October for players from Nos. 101-150, and for Nos. 11-35 on the Symetra Tour money list.

Among those who avoided a return to the Q-Series was Maria Fassi of Mexico, largely based on her pro debut.

She tied for 12th at the U.S. Women’s Open, which has the largest purse among the majors. Fassi made 80% of her money from one event with $103,065. She made $26,099 from three other tournaments and had a stretch of seven straight missed cuts.

Fassi, along with Jennifer Kupcho, went through the Q-Series last year, earned cards, deferred their memberships so they could finish college and didn’t start until June. Kupcho had two big weeks. While she missed five of her last six cuts, she tied for second in a major at the Evian Championship and tied for fifth at the Marathon Classic. She is eligible for the Asia swing but goes into them at No. 64 in the Race to CME Globe.

It would be simple enough for Bryson DeChambeau to say he’s going to spend time in the gym over the next month.

Only it’s never that simple with DeChambeau.

The objective is to get stronger, and he says that means he will probably look bigger. And he says he’s going to have fun doing it through muscle activation techniques.

“We make sure the neurological threshold is just as high as the mechanical threshold,” DeChambeau said. “In layman’s terms, pretty much whatever muscle potentially you have, how big and the muscle spindles you have, making you recruit every single one of them to their full potential throughout the whole range, and training the whole range of motion.”

DeChambeau calls it “revolutionary in the physical therapy world.”

“I’m looking forward to an incredible off-season of getting really strong and really stable,” he said.

Pat Perez is the latest on the list of players who went chasing power only to find their games got weaker. He also is the latest to figure out that what he had was good enough to win on the PGA Tour and reach as high as No. 16 in the world.

Perez returned from shoulder surgery to win twice in 26 starts, finally reaping the rewards of being among the top players in the world ranking – the Masters, no U.S. Open qualifying for the first time and more than $7 million over two seasons.

And then he wanted to get better, which meant trying to get longer.

“I played for three years one way and I made a lot of money, won twice, do all these things,” Perez said. “And then I went away from it to try to get longer. It just hurt my game, so I went back to the drawing board.”

He finished third in Las Vegas, his best finish since he won in Malaysia two years ago. It moved his world ranking from No. 183 to No. 120.

Dustin Johnson plans to defend his title in the Saudi International next January. The tournament also confirmed that world No. 1 Brooks Koepka will return. … Phil Mickelson now has gone 18 consecutive starts without a top-10 finish since winning at Pebble Beach in February. … The 2022 Ryder Cup in Italy will end on Oct. 2, the third time since 2010 the matches end in October. The others were Wales in 2010 and Hazeltine in 2016. … Ian Baker-Finch will captain the Australians in the Olympics for the second time. Three Aussies currently are in the top 25 in the world – Adam Scott, Marc Leishman and Jason Day, none of whom was in Rio de Janeiro in 2016.

STAT OF THE WEEK

Jon Rahm has finished in the top five in 10 of his 14 regular European Tour events, including five victories.

“Putter got hot this week – tends to do that sometimes. And when it does, if I’m hitting it halfway decent, I feel like I can win.” – Kevin Na, after making 559 feet of putts over four rounds in his victory at Las Vegas.