97 Masters: When a young Tiger grabbed golf by the tail 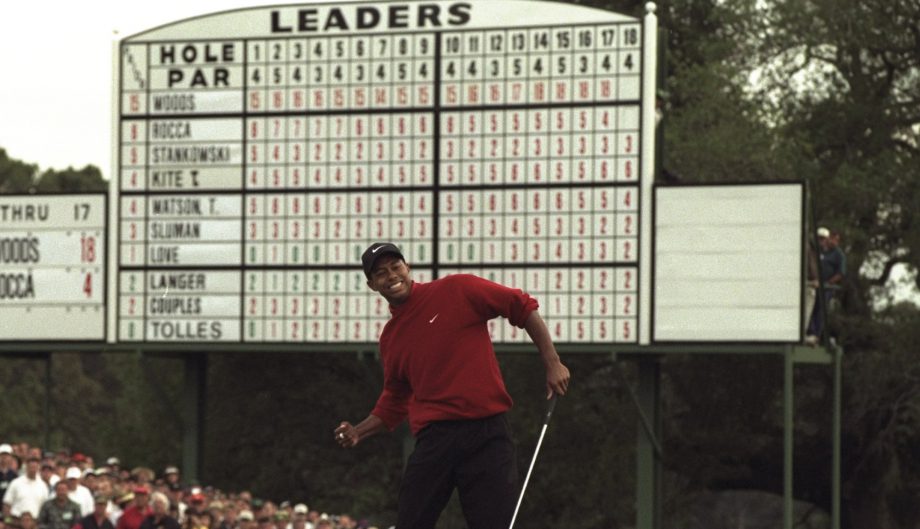 His Masters win 20 years ago would have marked the apex of just about every other golfer’s career. It’s worth remembering now that Tiger Woods was just getting started.

He’s vowed to attend the Champions Dinner, but the four-time Masters champion announced Friday night that he won’t play this year because of an ailing back. His latest attempt to jump-start a career derailed by chronic injuries ended miserably in February, when Woods walked off the course at the Dubai Desert Classic with back spasms.

“I’m trying everything to be able to get back and play,” he said last week. “I love that event. It’s meant so much to me in my life. It has so much history and meaning to me, I’d love to get back.”

One thing that hasn’t changed: When Woods plays, everyone pays attention. These days, it might amount to no more than a casual check of where he’s placed in the field.

Watch @TigerWoods look back at his historic 1997 win at #themasters. pic.twitter.com/VJDPcK1Kyz

Woods shot 40 on his opening nine in his first major championship as a pro and still won by 12 strokes. He averaged 25 yards longer off the tee than the next closest player, blowing by bunkers and firing darts into the roly-poly greens with shorter irons and from angles no one else had even considered. He made everything inside 8 feet.

The powers-that-be at Augusta National wouldn’t get around to “Tiger-proofing” the place for three more years. But there was already a whiff of panic in the air.

“Obviously the Masters Committee has to be a little concerned,” veteran pro Tom Kite weighed in after Saturday’s third round in 1997. “They’ve got a golf course that’s pretty darn tough, and they’ve got somebody just ripping it up.”

Woods stayed up late that night talking with his father, Earl, about how to rip it up some more.

Earl had turned over control of Tiger’s swing to more capable teachers long ago. But because military habits die hard, the ex-Green Beret reserved the job of toughening up the kid for himself.

When Tiger was starting out, he’d jangle the coins in his pocket in the middle of a backswing. As he got older, Earl progressed – digressed, really – to dropping clubs, hopping up and down, yelling, cussing, even using the occasional N-word. None of it dented his son’s suit of armour.

Sometime past midnight, Earl checked off the last box on his list.

“Just get in your own little world,” he said, “and go out there and just thrash ’em.”

He was as thin as a 2-iron then, supple as Gumby, and Woods controlled the golf ball like no one you’d ever seen. Twenty records fell over the four days – youngest Masters champion, lowest score, biggest margin of victory, etc. – yet that only hinted at Woods’ readiness for the grand stage.

When Nick Faldo, the previous year’s champion, draped the green jacket over Woods’ shoulders at the trophy ceremony, it marked almost 50 years to the day that Jackie Robinson broke baseball’s colour barrier. The Spartan white Augusta clubhouse in the background was a subtle reminder that on matters of race, golf had been dragging its cleats.

But gifted an athlete like Woods, a blend of talent and charisma whose appeal stretched from lush suburban courses to raggedy inner-city driving ranges, the game hopped aboard.

“I was there waiting for the finish. It was a foregone conclusion,” former PGA Tour commissioner Tim Finchem recalled. “From then on it was only a question of details.

“How many does he win? Does he challenge the big, long-term records?” he said. “If he stays like this, and plays like this, and stays healthy and challenges the big records – which takes decades – that’s going to be an awesome impact on the game.”

Woods was even better than advertised. As he took off, prize money and TV ratings soared. Galleries swelled and occasionally got rowdy. Some old-timers blanched, but golf suddenly seemed a lot cooler.

Taking their cues from Woods, kids wandered onto courses from Florida to California, Northern Ireland to South Africa, Australia, Argentina and a thousand points in between. A serious few stayed with it, following his blueprint, emulating his fitness and adopting his survival-of-the-fittest approach to every competition.

Those are the ones who walk nonchalantly past Woods and his tee shots nowadays on the way to their own. They constitute the deepest pool of talent the game has ever seen. But in 1997, they were just fans.

“I was 9 and just getting into golf,” Australian Jason Day, the No. 3-ranked player in the world, recalled recently. “My dad had this turn-knob TV with bunny ears. You had to move the antenna to get the right picture and it was really early in the morning. I remember him walking up the 18th and he obliterated the field.

“I started playing more golf than I usually did,” he added. “And then I read a book about him when I was 14. So, they’re the two moments that really kind of changed my life.”

Instead of being inspired, the old guard playing alongside Woods at that Masters was terrified.

“It threw me into a tailspin seeing how much talent a guy like that had. It affected me,” said Steve Stricker, who has partnered with Woods in U.S. team events for years. “I don’t have any problem saying it now. But it took me a while to get out of the funk, thinking, ‘I can’t do what he’s doing.”’

At that moment, though, Woods wasn’t worried about usurpers, young or old, and the horizon wasn’t the only thing that appeared limitless. Just 21, he looked like he could go on winning forever.

Woods did for the next dozen years, everything and everywhere but especially at the biggest events, putting himself well ahead of pace to rip the most revered record in golf – 18 career majors – from Jack Nicklaus. Then life thrashed him back.

Some argue that began at the 2008 U.S. Open, where Woods won his last major after a scratch-and-claw duel with Rocco Mediate in a Monday playoff. He hobbled off with the trophy and, it turned out, stress fractures in both his knee and tibia that required reconstruction barely two weeks later. Still only 32, Woods began falling apart like a used car.

The next year brought an even more literal thrashing. First came his “Buster Douglas” moment in August, when little-known Y.E. Yang went off in the final group on the final day of the PGA Championship paired with Woods and beat him by three shots. It marked the first time Woods had failed to seal the deal in a major after holding at least a share of the 54-hole lead.

That small tear in his cloak of invincibility hinted at the trouble ahead. Two months later, after a Thanksgiving night fight with his wife over widely rumoured infidelities, Woods raced out of his driveway and wrecked into a tree, knocking himself unconscious. Neither his image nor his golf game ever completely recovered.

He’s won eight times on the PGA Tour since, though none after 2013. The chain-reaction crash set off by that 2008 injury has reached down to both Achilles tendons through his back and on up to his neck. It didn’t help that at points in between, Woods ignored his inner circle’s advice and sneaked in a few days of training with Navy Seals.

He’s grown increasingly guarded about his life. He even named his yacht Privacy.

Turns out Woods wasn’t kidding. In an interview last year, he told Time magazine what he’d like his legacy to be:

“The best thing,” Woods said, “would be to not be remembered.”

Good luck with that.