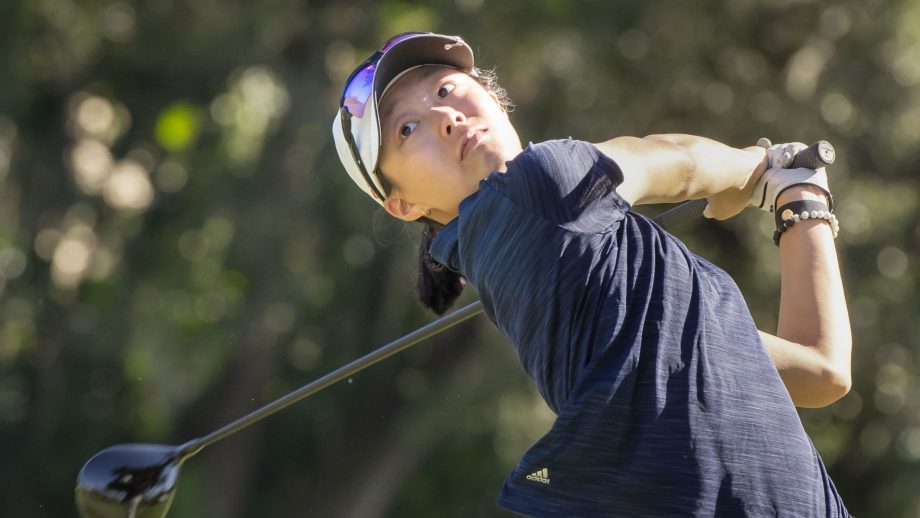 CORAL GABLES, Fla. – Emily Zhu is back at historic Biltmore Golf Club this week with the chance to join a highly exclusive circle of two-time Junior Orange Bowl International champions.

In a very real sense, though, Zhu’s 2021 triumph already has paid huge dividends. Fair to say the Biltmore will be seeing a lot more of her in the coming years.

“It was because of the tournament that I was able to get (familiar) with the University of Miami,” said the Canadian champion, who signed in November to play for the Hurricanes starting next fall. “I’m very grateful for that.”

First things first, though. When the international golf showcase tees off Monday, Zhu sets out to become just the fourth golfer to win multiple Junior Orange Bowl titles in the tournament’s long history.

A year ago, Zhu staved off a dogged challenge from Chile’s Antonia Matte to emerge a three-stroke victory that ended a 17-month winless drought. Now she seeks to join Michelle McGann (1985-86), Kellee Booth (1991-92) and Grace Park (1993, ’96) to have her name more than once on the trophy.

“I definitely want to go for it again,” said Zhu. “I think as long as I play my game, I will have a chance at winning again. But it’s not something I can exactly control.”

Anna Davis (Spring Valley, Calif.) is the reigning Junior PGA Championship girls’ champion, pulling away to a seven-shot triumph after a closing 67 at Valhalla Golf Club. It was one of three victories last year for Davis, No. 6 in the latest Golfweek rankings.

The boys’ division is guaranteed a 58th different champion in as many years, with 2021 winner Sebastian Moss now playing collegiately at the University of Louisville. However, four of last year’s top 10 finishers are back in hopes of adding their name to the champions’ list.

“It’s a tournament that has some pretty cool (winners) over the years,” said Tommy Morrison (Frisco, Texas), who placed fifth a year ago. “I would be honored to have my name on that list.”

In all, 60 boys and 34 girls are set to tee up in the tournament’s 58th edition, some 20 percent more than last year when the pandemic held down numbers. Several European nations are back in the lineup after sitting out a year.

Zhu, for her part, acknowledged she has yet to see her name on the trophy. “I would love to, though,” she added. “Just to be able to take a picture.”

Though Zhu captured the 2019 Canadian Junior title, she arrived in Coral Gables last year without a victory since then. A 69-66 start at the Biltmore put her in the driver’s seat, though Matte twice sliced the lead to one before falling back.

“It kind of gave me the sense that I still have it,” Zhu said. “In those times when I get down and my scores aren’t that good, I can look back on the Junior Orange Bowl and what I did during those moments to help me win.”

Zhu became Canada’s third Junior Orange Bowl champion, joining Brooke Henderson (2013) and Maude-Aimee LeBlanc (2006). And there was the added bonus when she managed to catch the attention of University of Miami coaches.

“I love the coaches, the team environment,” said Zhu, who kept a limited schedule in 2021 amid virus concerns. “They’ve been very big supporters over the past year as I’ve gone through some of my struggles. I really appreciate what they’ve done for me already.”

The Biltmore, by the way, is UM golf’s home base. “I’ve won here,” she quipped, “so I already like the course.”

Morrison, No. 17 in the Golfweek boys’ rankings, also has a certain familiarity with the Biltmore. This marks his fourth year of teeing up at the Junior Orange Bowl.

“I know a lot of the pins and how the course plays in different wind directions,” he said. “I think I’ve just become more comfortable out here. If you can chip and putt well and play the par-3s well, it leads to some pretty good success.”

“I like the international field,” Morrison said. “We get to meet a lot of new kids we don’t usually get to play with. At a lot of the junior events we play, you kind of see the same people every time.”

Live scoring can be found here.