A building block in life 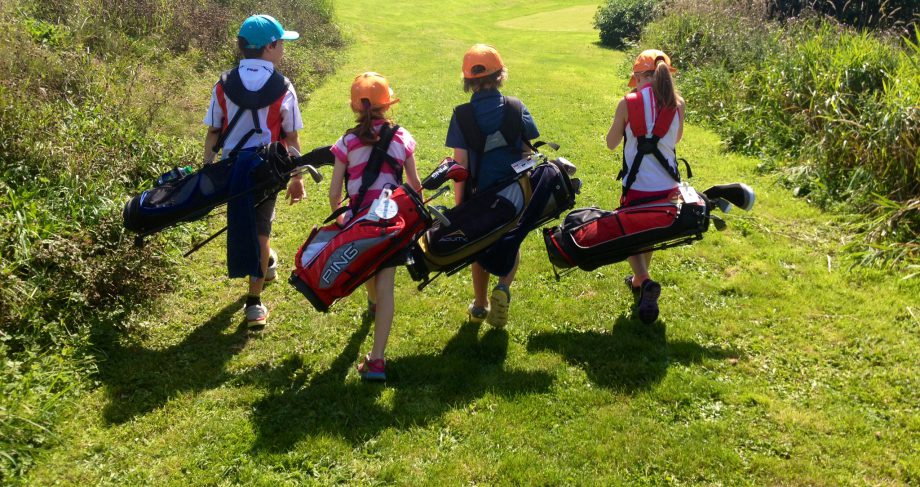 When the National Golf in Schools program was launched in selected elementary schools across Canada in 2009, many considered it a fine addition to the phys-ed curriculum. They appreciated the potential longterm ramifications of one of the few phys-ed activities that allows for total family participation away from the school environment. While some questioned whether swinging plastic clubs at foam balls constituted a sport of any cardiovascular significance, the experts knew otherwise. They were aware of the vigorous calorie-burning routine of walking 18 holes—2,000 calories, if you carry your bag, according to a Walker Research Group report commissioned by the World Golf Foundation and Golf 20/20—and that a youth’s blood glucose levels tumble by up to 20 per cent after a round of golf. In addition, an estimated 240 calories per hour are consumed by hitting a bucket of balls on the driving range.

According to a 2012 study by Australia’s Inside- Golf magazine, the typical mid-handicapper walks roughly 80 per cent further than the scorecard yardage on a given day of 18-hole play, which equates to 9.9 kilometres if you were playing from just shy of 6,000 yards.

Developed by Golf Canada in partnership with Physical and Health Education Canada and the PGA of Canada, the Golf in Schools program stresses that active element.

“It’s not a bunch of kids waiting around for someone to hit a putt,” stresses Jeff Thompson, Chief Sport Officer with Golf Canada. “The programs are all activity-based, from speed and agility to coordination and balance.”

Given those innate health benefits, the National Golf in Schools program couldn’t have come at a better time. For the first time in two centuries, the current generation of children may have shorter life expectancies than their parents, reports the New England Journal of Medicine, citing childhood obesity as the main culprit. Statistics Canada reported that between 1985 and 2011, obesity among Canada’s youth tripled. As recent as last year an Active Healthy Kids Canada research paper indicated that while 84 per cent of Canadian kids aged 3-4 are active enough to meet the recommended daily physical activity guidelines “this falls to only 7 per cent at ages 5-11, and only 4 per cent at ages 12-17.”

The report also indicated that just 55 per cent of Canadian schools have a fully implemented policy for daily PE for all students, and that “82 per cent of parents agree that the education system should place more importance on providing quality PE.”

This is not to suggest the Canadian school system is dropping the ball. Diminished budgets have contributed to the steady curtailing of phys-ed classes over the years. Much of the increase in sedentary behaviour among youth can be attributed to the incursion of technology in our daily lives. While an increased emphasis on school-based physical education programs is far from the be-all and end-all antidote for childhood obesity, it is a valuable step nonetheless. That’s not merely with respect to the obvious fi tness element and skills learned in gym class (while helping avoid heart disease and other ailments down the road), but to a youngster’s scholastic and social development as well.

“We have seen the trend that generally the first thing to be cut in schools is a physical education class, although research strongly suggests that engaging youth in physical activity, beyond motor development, helps with concentration in school,” says Dr. Tanya Forneris, an associate professor in the School of Human Kinetics at the University of Ottawa, which was approached by Golf Canada in 2014 “to help integrate life skills—such as focus, goal setting, perseverance, sportsmanship, respect and honesty—into Golf Canada’s youth programming.

“Sports is a great context to teach these skills, because youth enjoy learning, and they’re motivated,” says Forneris, a PhD in Counselling Psychology and an expert in positive youth development and community programming through sports.

Forneris suggests there is far more potential to school sports than simply building character. “There’s a long line of studies—much of it in the past 15 years or so—that we use to support our core research of positive youth development supporting physiological, social and educational development,” she says.

From the standpoint of enhanced cognitive performance alone, you could fill a computer hard drive with supporting evidence. Among them is a 1999 Maryland research paper by C. Edwin Bencraft. Entitled “The Relationship between Physical Activity, Brain Development and Cognitive Performance,” Bencraft’s work observed four key points: challenging motor tasks before the age of 10 can increase cognitive ability; aerobic exercise improves cognitive functioning by increasing the number of capillaries serving the brain; cross-lateral movements increase the communication ability between the brain’s hemispheres; and physical activity reduces the production of stress chemicals that inhibit cognitive processing.

In other words, active kids generally think quicker, concentrate better and are apt to be less stressed than their non-active classmates. Canadian research includes a six-year Quebec study that found youngsters who received five extra hours of physical activity per week achieved higher marks in academic subjects than students who received the regular regimen.

Even the Canadian Association of Principals supports the concept, noting that children who engage in physical education on a daily basis come to class more ready to learn, and play and interact better with others, according to Straight Talk About Children and Sport, a book commissioned by the Coaching Association of Canada. You can also not underestimate the element of improved self-esteem through accomplishments in school sports.

But if sport is to be used as a vehicle in instilling such habits and principles—whether it’s a team activity such as hockey or an individual sport like golf—you’ve got to hook them early.

“The research out there now, especially on the girls side, is that if they haven’t tried a sport by the age of 12, the chances of them taking up the sport after that time drops incrementally,” notes Golf Canada’s Thompson.

In fact, according to a 1993 Melpomene Institute for Women’s Health (Minnesota) study, “if a girl does not participate in sport by the age of 10, there is only a 10 per cent chance she will be physically active when she is 25.”

It gets worse at the secondary-school level. Once it becomes an optional subject, enrolment in physical education in Canada tends to decrease significantly, with the decrease more noticeable for adolescent females than males, a myriad of studies observe.

Many in Canada are now considering whether physical education should be mandatory through grade 12. Indeed, given the research, gym class has never looked like a smarter choice.

Part one in this five-part series, Class is in Session, was published in the April edition of Golf Canada Magazine. It can be read here.