A century of memories 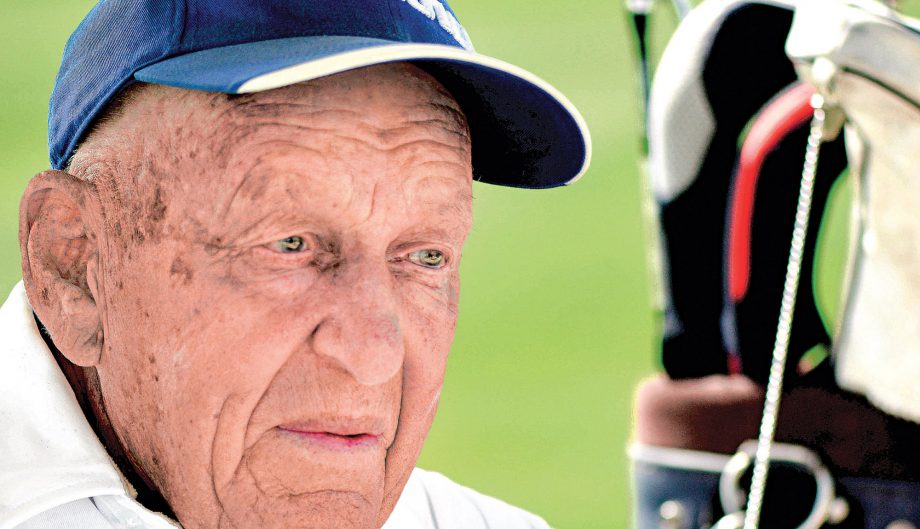 On that day in 1927, the young Dutch boy ventured over to Lambton Golf and Country Club in Toronto eager to make a buck. He came away with only 20 cents but it was still his first paid job in the game, having carried a member’s bag for nine holes while all the other kids were off celebrating the jubilee.

Slowly but surely the hardworking immigrant climbed the ranks at Lambton and beyond. He learned the game, the rules and how to conduct himself with class and dignity at all times.

As he approaches his 100th birthday on April 11th, Canada’s oldest golf professional still embodies those same qualities. He’s friendly, courteous and eager to regale in the stories of his past. And boy, are there many.

Like the days he spent shagging balls at the Lambton range for George S. Lyon. Like when he met Bobby Jones at the Peachtree Golf Club in Atlanta. Like when he sat and watched Ben Hogan hit balls for an hour and a half in 1960. Like when he played with Sam Snead or Bob Hope, just a few of the many iconic figures he rubbed shoulders with through the years.

The tales extend beyond golf too. De Laat skated with the Toronto Maple Leafs practice squad for a few years as well, playing alongside Punch Imlach and Stafford Smythe, and was part of the Aurora Army’s 1943 Ontario Hockey Association championship team. The 5-7, 145-lb. right-winger was a speedy sniper, once potting nine goals in a game and leading the team in scoring for four seasons.

Golf was his true passion though. He paid close attention to the club professionals who had come over from Scotland at the time and soaked up every word they said.

“They taught the game and there was no fooling around,” he explained. “Do it his way or get going.”

Having graduated from a B caddie to an A caddie thanks to his hustle and tenacity, Lambton’s head pro Willie Lamb took de Laat under his wing. Lamb, who had been mentored by Percy Barrett, who himself was mentored by Harry Vardon, showed de Laat the ropes of club cleaning, club repairing and instruction. He developed de Laat into a valuable junior assistant pro and an improving player too.

De Laat never possessed the natural ability of his counterparts but was, and still is, committed to practising. It’s the key to his exceptional, creative short game and what helped the PGA of Canada’s longest serving member capture the Toronto District assistants’ championship in 1938 and a spot in the first of his 15 Canadian Opens in 1941.

Always one to pave his own way, de Laat moved on from Lambton after that. He enjoyed a brief stint as an assistant at Lakeview Golf Club and then some time out of the golf industry during the Second World War. But the 1944 Millar Trophy Match-Play Championship was arguably the turning point in his career.

He pooled all his money together just to compete, entering as a huge underdog in the match play bracket. One by one, de Laat defeated all the higher seeds he faced — earning the nickname “The Giant Killer” — until the final, which he lost 6&4 to his friend Bill Kerr.

That run to the Millar Trophy final got him noticed, and he accepted a head professional position at Pine Point Golf Club. Then in 1948, three seasons into his tenure there, he agreed to take over as head professional at nearby Weston Golf and Country Club, a post he would remain at for 30 years.

He was the consummate club pro, always treating the game and members with respect. It earned him countless friends, like Arnold Palmer, who won the 1955 Canadian Open at Weston, and Charlie Sifford, the first African-American to tee it up on the PGA Tour. De Laat was good enough to play with them, but he was just a little bit short of what it took to be a tour pro and beat them.

Something else was also nagging at him: The idea to establish his own club. Twenty-three years after putting $15,000 down on a piece of land in Caledon, Ont. — which he did on the Monday after the ’55 Open in which he played all four rounds — the longtime club professional founded Mayfield Golf Club in 1978.

“I had nine children and we had to keep them busy, so we built a golf course!” he laughed. “And one day on the first of April we started, then got the farmers to help us, working in teams. Land was ploughed and developed and in the first year we had nine holes going.”

Growing up as an immigrant, de Laat didn’t have any access to the game. Mayfield, which grew to 27 holes in 2004, was always intended to be a public facility and still remains so.

Three of his kids — Christopher, Gregory and Paul — have taken over the day-to-day operations of the family business but dad still likes to interact with people in the clubhouse and sit in on the odd management meeting, when he’s not practising on the range.

His kids say he’s always been active and busy, which has likely contributed to his resilient health. But his achievements after sailing into Halifax’s Pier 21 in 1924 are just as unparalleled. Gord de Laat has given golf in this country nearly 90 years of service. Asked what golf and Canada have given to him, he simply says, “A way of life.”

This article was originally published in the April 2017 edition of Golf Canada Magazine. To view the full magazine, click the image to the left.