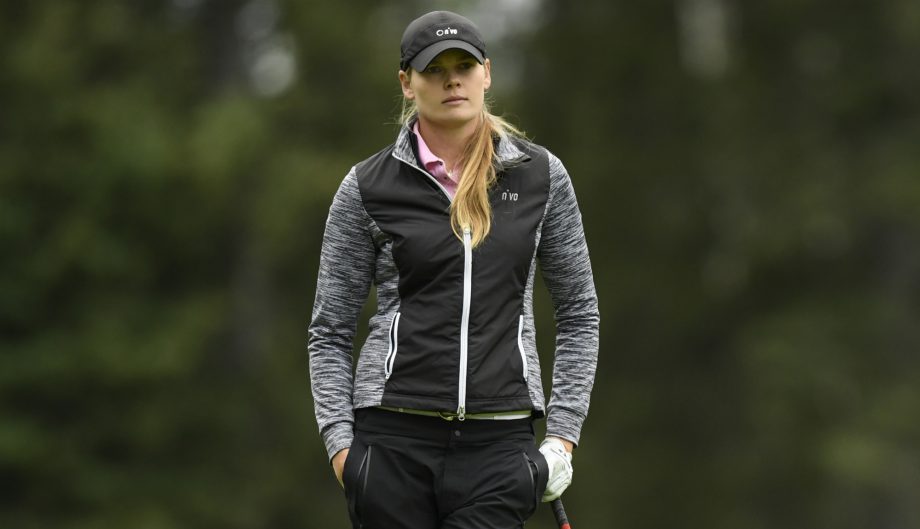 The key to Maude-Aimée LeBlanc’s improved play of late has been lightening up on herself, in more ways than one.

The challenge for Maude-Aimée LeBlanc has never been talent.

The 6-1 native of Sherbrooke, Que., uses her long levers to power a swing that has her ranked eighth on the LPGA Tour in average driving distance at close to 270 yards, just three behind leader Lexi Thompson.

The 28-year-old has shown such abilities throughout her career, winning the 2006 Canadian Junior Girls championship, the 2006 Junior Orange Bowl International and the 2010 NCAA Division I Team Championship for Purdue University.

The challenge for LeBlanc hasn’t been work ethic either.

At the 2016 KPMG Women’s PGA Championship, she took up a spot on the far left side of the range at Sahalee Country Club. A crowd formed to watch the tall woman with the athletic swing knock out long shot after long shot.

People wandered off to watch other players tee off, followed them for nine holes and when they made the turn, walked by the range to see LeBlanc still in the same place, still knocking out long shot after long shot.

No, LeBlanc has always had an extreme talent for the game since she took it up at five, accompanying her dad, Gaston, to the course. She’s always had the drive and motivation too.

LeBlanc’s challenge, almost since the day she picked up a club, is controlling herself and the fire that she admits is sometimes all consuming, a greater obstacle than the course, the distance between her and the cup or even one of her opponents.

At the 2009 U.S. Women’s Amateur, Leblanc told Golfweek: “I think I have the worst temper here.”

Later that summer she stormed off the course at the Canadian Pacific Women’s Open when, still an amateur, she hit a shot into the water on her 36th hole, made a double-bogey and missed the cut by a stroke. She said she brooded for weeks and didn’t sleep because of that chunked shot into the drink at Priddis Greens near Calgary.

A year later, when she was at Purdue, her self-loathing on the golf course was judged to be unacceptable. She was the sixth-ranked player in the nation when her coach, Devon Brouse, sent her to the clubhouse after 11 holes of the second round of the Tiger/Wave Classic in New Orleans for unsportsmanlike conduct. She was 11 over par at the time. Brouse repeatedly used the word “disrespect” in explaining his decision.

She knows it. She knows she can’t conquer this game until she learns to find a way to regulate the pressures that threaten to suppress her talent and work ethic.

Pressure. It’s a word in a couple different definitions that defines what is happening in LeBlanc’s game and life right now.

When she doesn’t meet those standards, LeBlanc admits she feels pressured to abandon whatever game plan she’s following at the time.

“Whenever I have a bad week or if I didn’t play the way I wanted that week, I have a lot of doubts in my head about what I’m doing,” she said. “That’s what is affecting me the most — when I start doubting what I’m doing. I’ll start making changes I shouldn’t be making.”

She’s working with her current coach, Diane Lavigne, on all aspects of her game, but mostly on managing pressure in all its forms.

The numbers say LeBlanc is making progress. A graduate of Golf Canada’s national team program, she turned pro in 2011 and earned her LPGA card at Q-School on her first try. Following a severe back injury that stunted her career for a couple of seasons, LeBlanc was demoted to the developmental Symetra Tour in 2015 but with five top-five finishes in 22 starts she earned her way back to the LPGA last year.

After being bothered by a right shoulder injury for the first half of the 2016 season, LeBlanc finished the year making 13 straight cuts (including her best career finish, a T11 at the Marathon Classic) to earn her card for 2017. She enjoyed a fine showing in last year’s CP Women’s Open with a wonderfully consistent run of 69-69-70-69 and a tie for 14th, coincidentally at Priddis Greens.

The key, as it turns out, has not only been managing that aforementioned pressure she heaps on her shoulders, but her grip pressure as well. Her climb up performance pecking orders has been in lockstep with a major improvement in her putting.

“The thing that has helped the most for my putting was the simplest thing ever, just grip pressure,” she said. “The one thing I changed in my grip was the pressure I apply on the grip with certain fingers. That made all the difference in the world and it makes my stroke so much more consistent every week.”

Specifically, she’s been focused on loosening the last three fingers of her right hand. “It takes the fingers out of the stroke and makes the face much more square,” she explained.

“A light bulb came on and since then it’s been really good,” she said of her improved stroke.

It’s been such a revelation that LeBlanc has expanded the grip pressure change to her full swing too.

“Keeping a light grip, very light grip pressure and trying to relax my arms through the swing, take any tension out of the swing. That’s what I’ve been trying to work on the most. It’s really harder than it sounds on the full swing, for me, anyway,” she explained.

“I feel like things are coming together if I can trust things on the course and just get out of my own way, pretty much.

“All these little things and trying to keep it simple on the course and trying not to put too much pressure on myself which is probably the hardest thing to do.”

As it turns out, a lighter touch is what LeBlanc has always needed, in more ways than one.