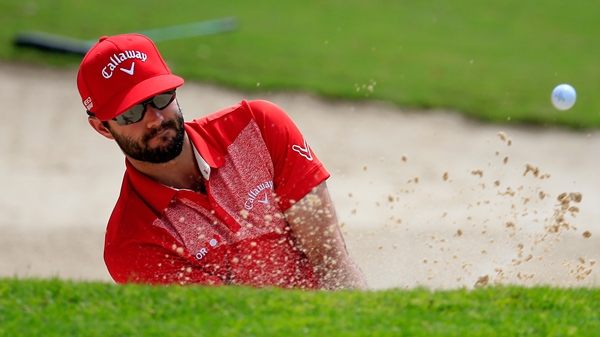 HONOLULU – Adam Hadwin will resume his first full season on the PGA Tour out of his comfort zone.

The native of Moose Jaw, Sask., now living in Abbotsford, B.C., tees it up Thursday at the Sony Open in Hawaii, the Tour’s first full-field event of 2015 that comes following nearly a two-month break. Hadwin will be one of five Canadians in the field – joining David Hearn of Brantford, Ont., Nick Taylor, a Winnipeg native now living in Abbotsford, Graham DeLaet of Weyburn, Sask., and Calgary native Roger Sloan – as American Jimmy Walker defends his title.

But Hadwin will have to get used to more than just the five-hour time difference in Hawaii.

“It feels weird to start my season this quickly,” Hadwin said during a conference call Wednesday. “Normally I’ve got another month before I start.

“I went home for Christmas for a week, then straight back down to Phoenix and right back into it. I’ve been working hard in Phoenix since Dec. 28th. The reason I worked so hard was a pretty good reason, to play on the PGA Tour.”

Hadwin will play the full 2014-15 season after topping the Web.com Tour money list last year. The 27-year-old opened the campaign on a solid note, making the cut in four of the five events he entered, finishing tied for 10th at the $6.2-million US Shriners Hospital for Children Open in Las Vegas in October.

But Hadwin didn’t kick back and enjoy himself over the break. With longtime coach Brett Saunders heading to Australia to visit family, Hadwin said he had to get in as much work with Saunders as possible before his departure. After spending Christmas with family, Hadwin went to Phoenix and resumed preparing for the resumption of the Tour schedule.

Still, after a hectic ’14 campaign, Hadwin said the time off – while limited – was certainly welcomed.

“I was definitely drained, I was ready for a break,” he said. “There wasn’t a whole lot of time to enjoy the 2014 year and what went on.

“By the end of Mexico (the OHL Classic at Playa del Carmen, which ended Nov. 16), I was ready to put some distance between me and my clubs for a while.”

Hadwin resumes play at No. 100 in the Tour rankings and 682 points behind FedEx Cup leader Robert Streb.

“I think I got off to an OK start,” Hadwin said. “I really struggled with my game the first part but the one thing I learned was when I didn’t feel my best I was able to kind of hang in there, make the cut and get to the weekend and once you do that you never know what could happen.

“You might find lightning in a bottle and jump into a top-10 like I did in Vegas. I was really proud that in the first five events I was able to do that.”

Hadwin, who had two wins on the Web.com Tour, was recently named as Canada’s top male golfer for 2014 by the Golf Journalist’s Association of Canada. But Hadwin hasn’t set personal goals over the remainder of the PGA Tour.

Instead, his focus will be on matters he can control.

“I’m not a huge goal-setter, especially not sort of outcome goals – things like I want to keep my card or I want to be in the top-50,” he said. “Those are very dependant on how others play.

“This year I’m just more focused on making sure I am as prepared as I can be for each event. I want to be a little bit better with my time management so that I’m doing everything each week that I need to do in order to be prepared for that event, scheduling enough time to get into the gym to stretch out and loosen my body and do all those things. If I can take care of the things I can control and prepare on and off the golf course then I’m going to set myself up to be successful. From there it’s anybody’s guess on how far I can take this.”

And although Hadwin is living out his dream of playing on the PGA Tour, he says his life hasn’t changed.

“I’m still doing the same things, I’m still friends with the same people, still hanging out and enjoying my life,” he said. “Obviously things on the course have changed a little bit, we’re playing bigger events, more people are watching.

“But life off the course hasn’t changed.”