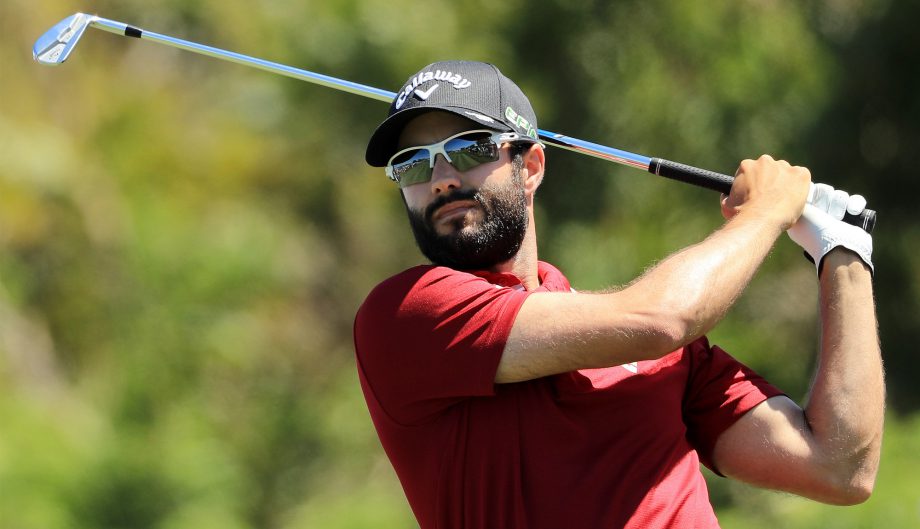 ORLANDO, Fla. – Charley Hoffman would have been happy to get off the 18th hole at Bay Hill with a par and go into the final round of the Arnold Palmer Invitational within one shot of the lead. With one big putt, Saturday turned out better than he could have imagined.

From trampled grass left of the 18th fairway, a tree slightly in his way, Hoffman chose to punch a 7-iron and have it run down the firm fairway. As long as it didn’t run straight and into the water, he figured he would have a chance for par.

The ball settled 70 feet away on the fringe, and Hoffman made the putt for a birdie, a 1-under 71 and a share of the lead with Kevin Kisner.

It was quite a wild ride, even by Orlando’s standards.

Kisner, who made three birdies in a four-hole stretch around the turn, wound up three-putting from above the hole on the fringe and shot 68.

They were at 11-under 205, three shots clear of anyone else, both in position to win the first Arnold Palmer Invitational since the September death of the iconic tournament host.

“To be in a position at Arnie’s event is a special spot,” Hoffman said. “It’s right up there with competing in a major championship, there’s no question. Mr. Palmer was the King. There’s a reason why he had the name. … To keep his legacy going and his event would be something special.”

Rory McIlroy, who started the weekend 11 shots out of the lead, birdied his last two holes for a 65 and climbed back into contention. He was five shots behind. Rickie Fowler, also playing early before the afternoon breeze picked up, also shot a 65 and was six behind.

Kisner for so long looked to have a chance to create a big cushion. He got there with a 7-iron into 10 feet on the par-3 second, an 8-iron to 4 feet right of the flag on the eighth and a lob wedge that spun back near the hole for another short birdie putt on No. 10.

Kisner had birdie chances inside 20 feet on four of the next five holes and couldn’t convert them, and his eagle putt from just over 20 feet on the par-5 16th was short.

Even so, he was in contention, something he hasn’t felt since winning at Sea Island for his first PGA Tour title at the end of 2015.

“These guys are not afraid and they’re going to make a lot of birdies and there’s no protecting leads,” Kisner said. “So I saw I got the lead early and then tried to make as many birdies as I could on the back nine. And had a lot of chances, just didn’t hole the putts. But I hit a lot of nice putts and I’m going to build off that tomorrow.”

Along with the trio who were three shots back, Valspar Championship winner Adam Hadwin of Abbotsford, B.C., and former U.S. Open champion Lucas Glover were four shots behind.

Hadwin is seeking to become the first player since Camilo Villegas in 2008 to win his first two PGA TOUR tournaments in back-to-back weeks. Hadwin is currently No. 4 in the FedExCup standings. He has advanced to the FedExCup Playoffs each of his first two seasons on TOUR, finishing 107th in 2015 and 85th in 2016.

And perhaps the most daunting name was McIlroy, hopeful of finding his form with the Masters around the corner.

“At least I’ve given myself a decent chance tomorrow,” McIlroy said.

At stake is a red cardigan sweater, a favourite of Palmer’s, which replaces the blue blazer that previously went to the winner.

Hoffman doesn’t have one, and wouldn’t plan to wear it even if he were to win.

“I’m not a cardigan guy. I got zero cardigans and hopefully add one,” he said. “And it wouldn’t be in the closet, it would be on the wall.”

Emiliano Grillo probably won’t have to worry about that. One shot behind going into Saturday, the Argentine opened with a pair of soft bogeys and then fell back with three shots into the water – two of them were golf balls, one of them was his golf club.

Grillo’s first approach to the par-5 sixth came up just short and splashed down. His next shot, from about 10 yards closer, also went into the water. The third attempt was still in the air when he flung his club into the lake. Grillo made a 9, and later put another ball into the water on No. 16. He wound up with a 78 and fell eight shots back.

Hoffman wasn’t even planning to be at Bay Hill. He only needed to finish 41st last week in the Valspar Championship to secure a spot in the Match Play field for next week, and instead missed the cut. Given the tribute to Palmer, it was an easy choice for him to play Bay Hill.

Now, he has a chance to win in consecutive seasons for the first time in his PGA Tour career.