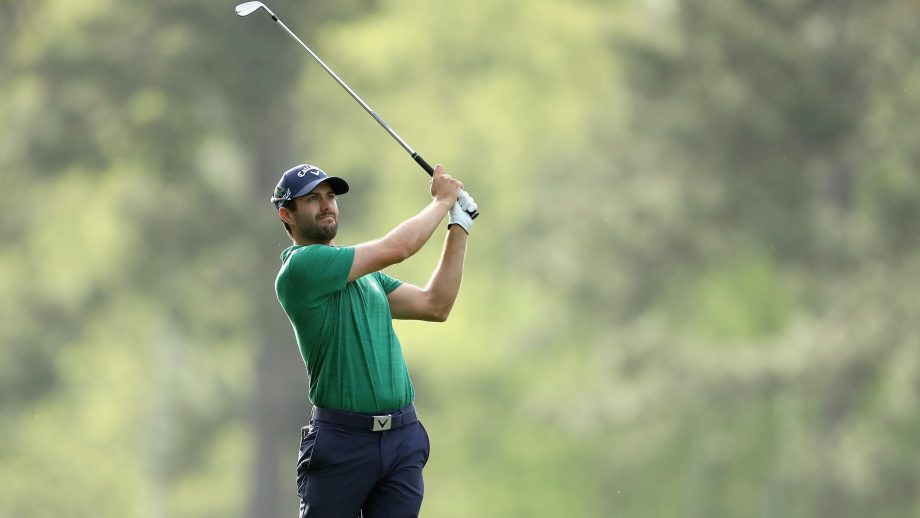 PONTE VEDRA BEACH, Fla. – Adam Hadwin of Abbotsford, B.C., is the top Canadian through two rounds, sitting in a tie for 34th at 4-under at the Players Championship. He shot a 68 on the day. Mackenzie Hughes of Dundas, Ont., shot a 67 and Nick Taylor, who also hails from Abbotsford, had a round of 74 and are both tied for 68th.

Webb Simpson didn’t miss anything except the island green. On the verge of shattering the course record Friday at the TPC Sawgrass – even a 59 was in play – Simpson hit sand wedge into the water on the notorious par-3 17th and made double bogey that ruined his round, but not his day at The Players Championship. He still tied the record with a 9-under 63, and he had a five-shot lead, the largest in the 45 years of this tournament.

“It wasn’t a mistake,” Simpson said. “Just the wrong club.”

He was in no mood to let that sour his mood. Simpson simply couldn’t miss, whether it was a 35-foot eagle putt on his second hole or a 30-foot birdie putt up the slope and into the cup on the 15th . At that point, all he could was laugh.

And then he reached the 17th, playing 147 yards to a back pin, the light wind playing tricks with him. He kept backing off, trying to decide between sand wedge and pitching wedge. He said a few fans were telling him to hit it.

The ball hit the wooden frame on the front of the green, caromed high in the air and landed on the back of the green with so much momentum that it rolled through the light collar of rough and disappeared into the water.

“Everything is going in,” he said. “You feel like no matter what, you’re going to make it, and I grew up on an easy golf course so it reminded me of being back home, shooting low numbers. But at the same time, you’re at the TPC Sawgrass, so you know that trouble is everywhere, as you guys saw with me on 17.”

And it will be there over the next two rounds.

Tiger Woods at least gets to return on the weekend. He made the cut on the number (1-under 143) after a 71 in the easier morning conditions. Woods was outside the cut line until Jordan Spieth and Justin Thomas each made bogey on the 18th. Spieth three-putted from 35 feet, though he shot 68 and ended three straight years missing the cut. Rory McIlroy wasn’t so fortunate. He was inside the cut line until hitting into the water on the 17th and making double bogey.

Conditions were ideal for scoring for the second straight day. Simpson took that to another level.

He ended the front nine with a 15-foot birdie putt on the par-5 ninth for a one-shot lead, and then he took off. Starting with an up-and-down at the par-5 11th, Simpson ran off six straight birdies – three straight from the 20-foot range, the most unlikely birdie with the one from behind the 15th green, and another up-and-down from left the of the green on the par-5 16th.

Spieth was 5 under on his round through 11 holes and wondered if he had the low round of the day. And then he saw a leaderboard.

“It was just amazing,” said Spieth, who played with McIlroy and Thomas. “We were talking about it throughout the round, all three of us. We were like, ‘Man, I hope he shoots 59.’ And at the same time, we’re saying if he shoots 59, can you imagine how hard the setup is going to be tomorrow?”

The real challenge will be catching Simpson.

“If you’re off a little bit, you make bogeys or double bogeys as easy as you can make birdies,” Simpson said. “I don’t think any lead is safe. … There’s no defensiveness in my game tomorrow.”

Schwartzel never came close to a bogey, only missing two greens, and just barely. Cantlay only had one bad swing and one bad break, both on the par-5 ninth, that led to bogey. Lee shot a 31 on the back nine with a double bogey on the 11th hole.

Simpson left them all in his wake.

“The most entertaining golf in our group was watching Webb’s score,” said Justin Rose, who played behind Simpson and shot 72. “It’s a miracle round. To be 11-under par, it’s a shame he doesn’t finish it off. But 17 is a hard hole to get through. I’m sure he was nervous playing that hole. We’re all nervous playing that hole, but an 11-under par round, that green I’m sure looks even smaller.”

Woods had wedges in his hand on his opening three holes and never got it close for birdie, and it was like that all day. He was in the feature pairing with Phil Mickelson and Rickie Fowler, and Woods was the only one to make the cut.

Mickelson went 79-73 and missed the cut for the fifth time in the last six years. Fowler was in good shape until losing a ball in a tree on the sixth hole for the first of consecutive double bogeys. He shot 71 and missed by two shots.