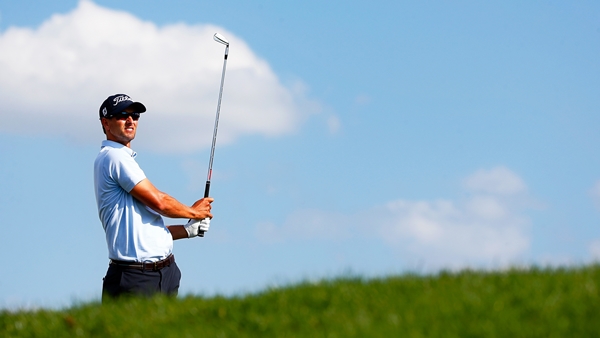 ORLANDO, Fla. – Adam Scott keeps putting his name in the Bay Hill record book, each round moving him closer to another handshake with The King.

One day after Scott opened with a record-tying 62 in the Arnold Palmer Invitational, he hit his stride around the turn Friday with five birdies in an eight-hole stretch to leave everyone else far behind. Even with a three-putt bogey on his final hole, Scott still had a 4-under 68 for a seven-shot lead.

He was at 14-under 130, matching the 36-hole record at Bay Hill first set by Tom Watson and Andy Bean in 1981. And his seven-shot margin at the halfway point shattered the previous record held by Tiger Woods in 2002 and Paul Azinger in 1988.

Scott sounds like he’s not the least bit satisfied.

“The challenge might be just to start again and try and play a great 36 holes,” he said. “Start fresh and try to be the leader after the next 36.”

That would merit a visit with Arnold Palmer, the tournament host known simply as “The King” in golf circles. Scott has spoken glowingly all week about his first invitation to Bay Hill when he was 20. Walking off the first green, Palmer was in a cart to greet him with a handshake, and Scott was amazed that Palmer knew his name.

Now he’s the Masters champion, and the 33-year-old Australian is playing like one.

J.B. Holmes (69), Chesson Hadley (68) and Francesco Molinari of Italy (70) were tied for second at 7-under. Keegan Bradley had the low score of the blustery second round with a 67, putting him in a group at 138 that included Brandt Snedeker (71) and Jamie Donaldson of Wales (71).

“I think I’m 10 behind and playing pretty well for two rounds,” said Snedeker, who was off by two. “He’s playing pretty phenomenal. He’s going to be a tough guy to catch. A guy that hits it as good as he does and seems to have a complete game like he has, and the way he’s playing now, he’s not going to come backward. Seems like an awfully special week if you can get close to him.”

Scott played in the afternoon, when the course began to get firm under two days of full sunshine, and the pace on the greens began to quicken. No one ever got closer than his three-shot lead to start the round, though there were two pivotal moments.

He holed a 15-foot par putt on the first hole to calm his nerves, and he hit a gorgeous shot out of the rough from 167 yards and made a 12-foot birdie on the ninth. He went to the back nine 1-under par for his round, and he took off from there.

He only made it look easy.

There were three rounds in the 80s, including by U.S. Amateur champion Matthew Fitzpatrick. U.S. Open champion Justin Rose, playing in the same group with Scott, had a 79 and missed the cut for the first time in a regular PGA Tour event since The Players Championship last May.

“This course will really start to bare its teeth,” Scott said. “I’ve got to take in the attitude of starting over again and trying to play a really hard 36 holes. And hopefully, if I can I can keep striking the ball like I am, I’ll give myself enough chances for birdie – and hopefully, more birdies than bogeys.”

At one point, caddie Steve Williams was some 275 yards down the left side of the fairway on the par-5 16th. His boss was barely visible back on the tee, but Williams watched his swing and instantly said, “Perfect.” And that it was, 325 yards right down the middle.

Scott missed only two fairways and has taken just 52 putts over the first 36 holes.

He was in no mood to celebrate just yet. For one thing, he is still recovering from being sick. His energy was better Friday, though he could barely talk above a whisper during a brief interview with Golf Channel before his round. And the Australian knows how a big lead can get away, even on the final day. He had a four-shot lead with four holes remaining in the 2012 British Open when it all went wrong – four straight bogeys – and Ernie Els walked off with the claret jug.

That’s a distant memory for Scott, who takes that green jacket from Augusta National with him just about everywhere he goes.

“Seven shots over two days is not enough,” Scott said. “I don’t think you can ever be enough in the lead, to be honest.”

DIVOTS: David Hearn of Brantford, Ont. is the only Canadian in the field. He carded an even-par 72 and is tied for 29th at 2-under 142. … Ryo Ishikawa had a 74 and was among those in the group at 5-under. The Japanese star has been working hard on his English. He used the words, “sucker pin,” in an interview, and then chatted comfortably with Jimmy Roberts of NBC Sports for about five minutes. … Southern Amateur champion Zachary Olsen made the cut. … Sam Saunders, the grandson of Arnold Palmer, had a 71 and was in a tie for 16th. … Paul Casey made a 7-foot bogey putt on his last hole for a 79 to make the cut on the number at 2-over 146.