Adam Scott plays as No. 1 for 1st time at Colonial 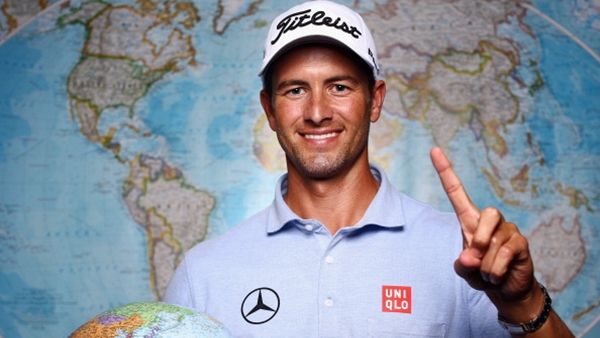 FORT WORTH, Texas – Adam Scott downplayed the world ranking and the idea of being the No. 1 player the past few months.

“Maybe I was trying to take some pressure off myself and just think about playing golf rather than other things that happen from it,” Scott said Wednesday. “I think that’s what I need to do now.”

The Australian finally made it to the top of the world ranking, overtaking injured Tiger Woods after a week at home in the Bahamas. Scott will play as No. 1 for the first time when he tees off Thursday at the Colonial.

“It’s only been realistic for the last week sitting at home,” Scott said, adding the accomplishment isn’t diminished by doing it that way instead of on the course.

“All the playing I did added up to this anyway. It’s just the way the system works,” he said. “Sure, it would have been awesome to win a tournament and jump to No. 1 like some guys have. … But hopefully I can get on and try to win a tournament this week or next week and start trying to keep myself up on top of the list.”

When he finished second to Boo Weekley last year, Kuchar was No. 13 and the highest-ranked player in Colonial’s invitational field. With a victory this time, Kuchar could possibly take a turn at No. 1.

“I don’t pay a whole lot of attention. I think those are some of the things that take care of themselves, and I’ve always been good at focusing on the things I can control,” Kuchar said. “That being said, I think the No. 1 position is an awesome title. … It’s cool, it’s attainable. I know it wasn’t long ago that the No. 1 ranking was not attainable, and Tiger had such a lockdown on it.”

Second-ranked Woods isn’t sure when he will return from a back injury. No. 3 Henrik Stenson, playing in Europe’s flagship event, should be able to reach No. 1 if he places higher at Wentworth than Scott at Colonial.

Scott has six top-25 finishes in his seven PGA Tour events this season. His only time outside the top 25 was two weeks ago at The Players Championship, where rounds of 67 and 69 where sandwiched by an opening 77 and closing 73 to tie for 38th place. Then bad weather at home last week took him out of his normal practice routine.

“But it was also quite nice to get a bit of a rest. It’s a blessing in disguise,” he said. “I was getting a little frustrated as a player because my swing and everything felt in good shape and I didn’t get four rounds out of it. I got two rounds out of it. Sometimes when you get out of your own way, it’s a good thing, and I think I did that last week.”

Scott is the first No. 1 player in the Colonial field since Nick Price in 1995. When Woods made his only appearance in 1997, it was three weeks before he was the top-ranked player.

Weekley is coming off a season-best fifth-place tie at the Byron Nelson Championship, where he had three consecutive rounds in the 60s. Much better than last year, when he missed the cut at the first stop in the Texas two-step.

“Coming into here last year, I sat out on that driving range and I probably was averaging 400 or 500 balls in the morning and in the afternoon. Hitting balls and hitting balls because I missed the cut,” Weekley said. “I couldn’t figure out what was going on down there with the base angle. And this year I finished fifth there, so I got a little more confidence coming into here.”

Canada’s Graham DeLaet and David Hearn are the lone Canadians in the field this week. Stephan Ames will make his debut on the Champions Tour.