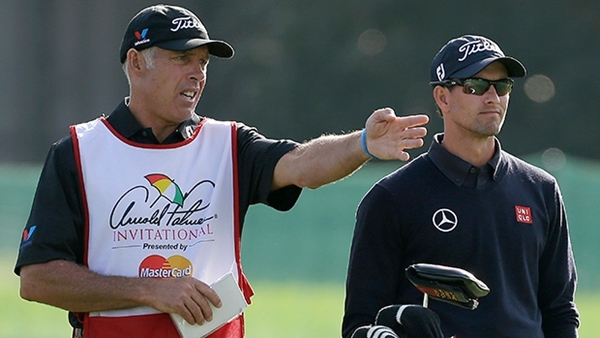 SHANGHAI – As far as caddies are concerned, this might as well be the Adam Scott sweepstakes.

Scott is in the market for a new caddie after Steve Williams headed off into semi-retirement. There figured to be a long line of candidates to work for the former Masters champion, who is No. 2 in the world and regarded as one of the most congenial players in golf.

He just never expected so many – and from so many walks of life.

“There were some shockers, like random ones – some guy in Florida who lives at home and looks after his mom,” Scott said Tuesday in downtown Shanghai after taking part in a promotion to celebrate the 10th edition of the HSBC Champions. “I guess he figured it would be a good job.”

For a caddie, there are not many better jobs in golf.

Scott has earned about $18 million in PGA Tour earnings alone over the last five years, and he has become a regular contender in the majors. He had Tony Navarro, who previously worked for Greg Norman, and then picked up Williams after his split with Tiger Woods.

“The way I see it, you cannot replace a Steve Williams,” Scott said. “I cannot go out and look for the next Steve Williams. I don’t think that’s possible. I need to go out and find what is going to work for me at this stage in my career, to complement all the things I am doing now, just like I did when I hired Steve.”

Scott has time to decide. He has two events in Australia after the HSBC Champions, and he doesn’t plan to start his 2015 season until the Honda Classic. He used Swiss neighbor Eddie Gardino in Japan; Gardino caddied for Angel Cabrera in his 2007 U.S. Open win at Oakmont. Scott is using David Clark, who currently works for Cameron Tringale, at the HSBC Champions.

“I need to see a few personalities, see what fits best with me,” Scott said. “I had such a strong one (personality) for so long.”

As for other possibilities? Speculation has been running rampant among the caddies. Scott said he has received more than 100 inquiries, and that he has responded to most of them – except for the guy in Florida.

“It’s good to know people would want to work with me,” Scott said. “If the phone didn’t get a message, I’d be a little worried what they all think of me. Like us golfers, the caddies are very aspirational as well. The way I’ve talked about what I want to achieve, some of the guys believe they can help me to do that and want to do the same.”