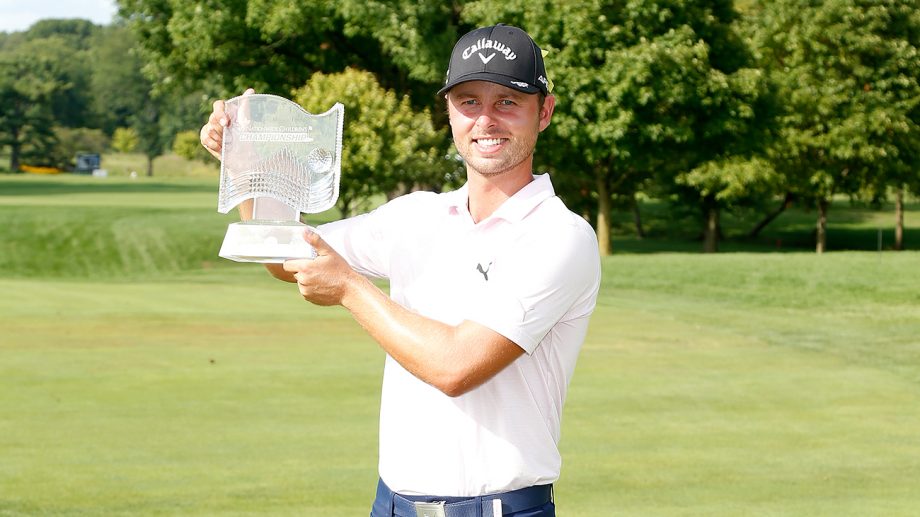 COLUMBUS, Ohio – Adam Svensson crept up the Nationwide Children’s Hospital Championship leaderboard all week and finally pounced Sunday, posting a 4-under par 67 to turn a two-stroke 54-hole deficit into a two-stroke victory. Svensson’s winning total, a 17-under 267, lowered the tournament scoring record (270 by Harris English in 2011 and Peter Uihilein in 2017) by three strokes.

Svensson played the front nine of The Ohio State University Golf Club’s Scarlet Course at 5-under par in the final round, birdieing Nos. 2, 3, 4, 7, and 9. The Surrey, British Columbia native did not make a single birdie on the back nine, but he avoided disaster with par saves at Nos. 11 and 14, made his only bogey at the par-3 13th, and closed the round with four consecutive two-putt pars.

“I was only two back, but I knew I had to play well today,” Svensson said. “If you’re 5-under on the front, you’re playing pretty well. I said to myself, ‘Just par in, or at least one more (birdie) coming in and see what happens. Just don’t make bogeys because you don’t want to give the tournament away.’”

The victory was Svensson’s second of the 2020-21 season and third of his Korn Ferry Tour career. In Svensson’s previous victory this year, which came in a playoff at the 2021 Club Car Championship at The Landings Club, he played the final 10 holes of regulation at 5-under par. This time around, he played the last 10 holes of regulation at even par.

Svensson starred at Barry University and won the 2013-14 NCAA Division II Jack Nicklaus National Player of the Year Award as a sophomore; he turned professional in February 2015, the spring of his junior season, and won the 2015 Korn Ferry Tour Qualifying Tournament’s Final Stage by seven strokes in December. It would be two Korn Ferry Tour seasons before Svensson’s first victory, though. A win at the 2018 The Bahamas Great Abaco Classic at The Abaco Club propelled Svensson to a 14th-place finish on the regular season money list and a PGA TOUR promotion.

The Canadian finished 167th in the 2019 FedExCup standings, sending him back to the Korn Ferry Tour for what became the 2020-21 season. Svensson secured a return trip to the PGA TOUR two weeks ago, as he finished 11th in the regular season points standings.

Five other players secured PGA TOUR cards by crossing the 210-point threshold the Korn Ferry Tour is currently using as its fail-safe number for players to finish inside The Finals 25.

Bronson Burgoon rose to the top spot in The Finals 25 with a T2, securing a return to the PGA TOUR via the Korn Ferry Tour for the fourth time. The 34-year-old Texas A&M University alum previously earned a TOUR card via the 2015 regular season standings and the 2017 and 2019 Korn Ferry Tour Finals.

Alex Smalley, a 24-year-old Duke University alum, secured his first PGA TOUR card with a T4. The Greensboro, North Carolina resident made four TOUR starts during the 2021 season, logging a pair of top-25s, a T29, and a T47.

Callum Tarren, a 30-year-old native of Darlington, England, jumped to fifth in The Finals 25 with a T4. It will be the first trip to the PGA TOUR for Tarren, who turned professional in 2014, won the 2018 PGA TOUR China Order of Merit to earn Korn Ferry Tour status for the first time, and needed to earn starts for the 2020-21 Korn Ferry Tour season via Q School.

Scott Gutschewski is headed back to the PGA TOUR for the first time since 2011. The 44-year-old logged a T10 at last week’s Albertsons Boise Open presented by Chevron, and rose to a T18 Sunday with a final- round 4-under 67. The Omaha, Nebraska native previously earned PGA TOUR cards via the Korn Ferry Tour in 2005, 2008, and 2010.

“I talked (my wife) into flying out and driving down to Evansville with me, so that will be fun. We’ll have a little celebration and it will be a fun drive.”