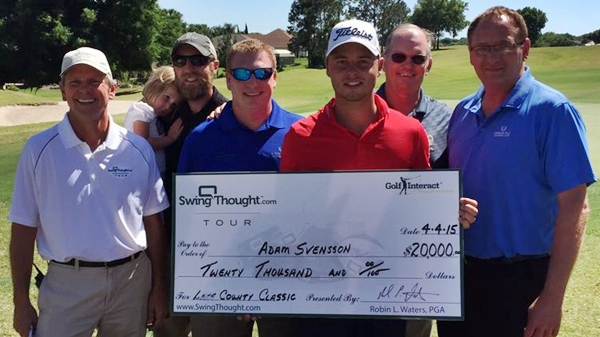 The Surrey, B.C. native was determined during Saturday’s final round at Harbor Hills Country Club, carding a 7-under 65 to finish at 18-under and force a playoff with fellow Canadian Lucas Kim of Toronto. The 21-year-old Svensson birdied the first playoff hole, sealing the victory and marking his first win as a professional.

Svensson’s surge up the leaderboard was thanks in part to two eagles—one on the par-5 6th of his first-round 69, and even more impressive the par-4 15th during Friday’s third-round 66.

Svensson made the leap to the professional ranks earlier in March after winning nine of his last 14 NCAA Division II titles, while playing for Barry University. He also won the Jack Nicklaus Award in 2014, given to the top golfer in NCAA Division I, II and III golf.

This victory makes Svensson the fourth member of Team Canada to record their first win as a professional in recent months. He joins Albin Choi, Taylor Pendrith (both SwingThought Tour winners) and Brooke Henderson (SunCoast Series). Amateur Squad’s Brittany Marchand also won on the Cactus Tour in 2015, while still holding amateur status during her fifth year of study at N.C. State.

Click here for full scores from the Lake County Classic.