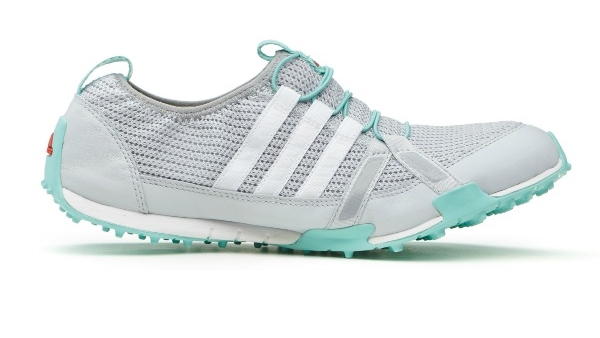 To successfully create a lightweight shoe that delivers on-course performance paired with a fashion-forward look, adidas Golf footwear designers combined an ultra-light, ballerina-inspired mesh upper with reinforcement zones for stability throughout the swing.

“As much as I travel to and from the course, I like having a shoe that I can wear both during and away from play,” said Jessica Korda, two-time LPGA Tour winner and adidas Golf Tour staff professional. “When I first put on the climacool ballerina, I was amazed at not only how lightweight and stylish it was, but how well it performed when I played.”

For enhanced flexibility, the climacool ballerina’s puremotion outsole was specifically-engineered with wider and deeper flex grooves and utilizes a slow recover fitfoam sockliner that conforms to the contours of the foot for a natural feel delivering long-lasting comfort.

Weighing less than five ounces (4.8oz), the climacool ballerina is the lightest women’s golf shoe adidas Golf has ever developed and is easily packable for travel or those on the move.

“Women are always looking for something different and fashionable,” said Masun Denison, Director, Global Product Marketing, Footwear at adidas Golf. “The challenge for us was to effectively infuse performance into a lightweight product that not only performs on the course but carries off course appeal at the same time, and with climacool ballerina, we’ve successfully done that.”