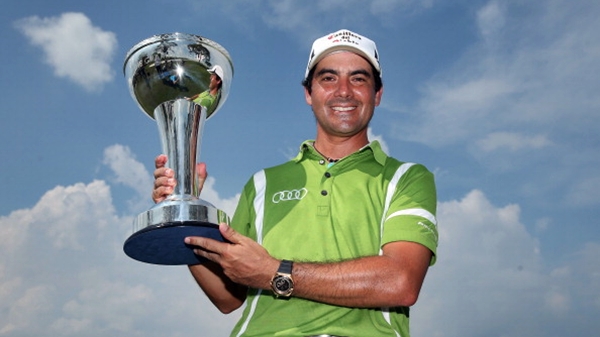 SINGAPORE – Felipe Aguilar surged into the lead at The Championship at Laguna National with a stunning back-nine 28 – capped by a birdie on the par-3 17th and an eagle on the par-4 18th – and then had to wait to see if anyone could catch him.

Co-overnight leader Anders Hansen was the last golfer to have a chance, but he failed to birdie his final two holes to force a playoff, giving Aguilar his first European Tour title in six years.

The Chilean shot a final round 10-under 62 to finish at 22-under 266, one stroke ahead of Hansen and American David Lipsky in joint-second.

“Yesterday I thought I had no chance,” Aguilar said. “Today I said to my caddie on the 17th after I made a birdie, `If we can make a birdie on 18 we can put some pressure on the leader,’ and he said `What about making a two?’ I said to him the way I had been hitting the ball I could well do two and I did. It’s very, very special.”

Hansen, who recently returned to the tour after a six-month layoff due to wrist surgery, had led by three shots after a birdie on the 12th hole but could not match Aguilar’s impressive finish. He bogeyed the 16th and then shot even par on the final two.

“What can you say? I heard (Aguilar) finished two, two. It’s just one of those days,” Hansen said. “It’s just really, really disappointing.”

Lipsky also tried to keep pace with three birdies on his back nine, but he fell just short of capturing his first European Tour title.

Aguilar started the day four shots back in equal-seventh, but started to climb into contention with four straight birdies after the turn on holes 10-13. After birdieing the par-5 15th, he then sank a 10-footer for another birdie on the 17th and holed his approach shot for eagle on the 18th.

The Chilean, who’s been dealing with a sore wrist he injured while mountain biking, won for just the second time on the European Tour, his previous title coming in Indonesia in 2008.

“It’s been a bit of a drought for six years. I’ve lost a couple of times in play-offs and had a couple of top-threes and top-fives, but never was able to get the round going on the last day, so it is nice to finally do it,” he said.

Hansen was aiming for his first title since the Joburg Open in 2009. He was playing in just his fourth event since surgery last year and was coming off a joint-fifth finish last week at the China Open.

“Obviously, the last two weeks have been really, really good,” he said. “I’ve hit the ball really well and putted nicely so there is not much to say. I can’t really blame myself for this.”

India’s Rahil Gangjee birdied his final five holes to finish in fourth place at 19 under, a stroke ahead of England’s Chris Wood (67) in sole fifth.

Panuphol Pittayarat of Thailand couldn’t keep up the form that saw him lead after the first two rounds and share the lead with Hansen after the third. He slumped to a 74 on Sunday after two bogeys and a double bogey, falling to joint-11th place.