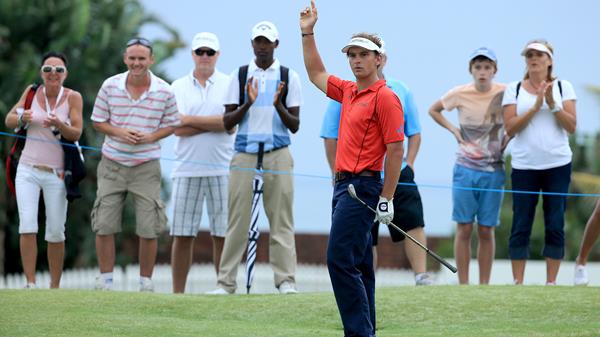 DURBAN, South Africa – Joost Luiten holed out for an albatross on the way to a 5-under 67 Friday and a share of the second-round lead with Louis Oosthuizen and Tommy Fleetwood at the Volvo Golf Champions.

The Dutchman holed his 7-iron from 248 yards for a two on the par-5 No. 10 at Durban Country Club. His shot pitched near the front fringe, took a couple of bounces across the green and rolled home.

“The ball just pitched exactly where I wanted it to, in front of the green and rolled right up to the flag and disappeared in the hole,” said Luiten, who turned 28 on Tuesday. “So, yeah, it was a good feeling. I’ve never had an albatross before and now at 7 under par I am in a great position for the weekend.”

Luiten is at 7-under 137 total alongside defending champion Oosthuizen (69) and Fleetwood (67).

There was only one albatross – or double eagle – on the European Tour all of last season. Chris Doak got it at the Madeira Islands Open in May.

Oosthuizen made four birdies and a bogey, while Fleetwood had six birdies and a single dropped shot. Victor Dubuisson (69) was alone in fourth at 6 under.

Luiten, who qualified for the elite 36-player field in Durban by capturing the KLM Open, was 3 under when he made his albatross and immediately jumped into a share of the lead at 6 under. He also birdied the last.

Oosthuizen is looking to successfully defend a European Tour title for the second time in his career after winning the Africa Open in 2011 and 2012.

“I’m delighted with my position and luckily it’s the type of golf course where you can get away with it by not hitting a lot of drivers or 3-woods,” the 2010 British Open winner said. “So I just need to keep it together for the weekend.”

Fleetwood earned his place in the field by winning the Johnnie Walker Championship at Gleneagles in September and he matched Luiten’s 67 to move into contention for a second tour title.

First round leader Raphael Jacquelin (73) remains in contention despite a slip into a share of sixth place with former British Open winner Darren Clarke (71).

Padraig Harrington shot a 71 after his caddie collapsed mid-round and was treated for dehydration. A photographer and then an Irish tourist stepped in to carry his bag.