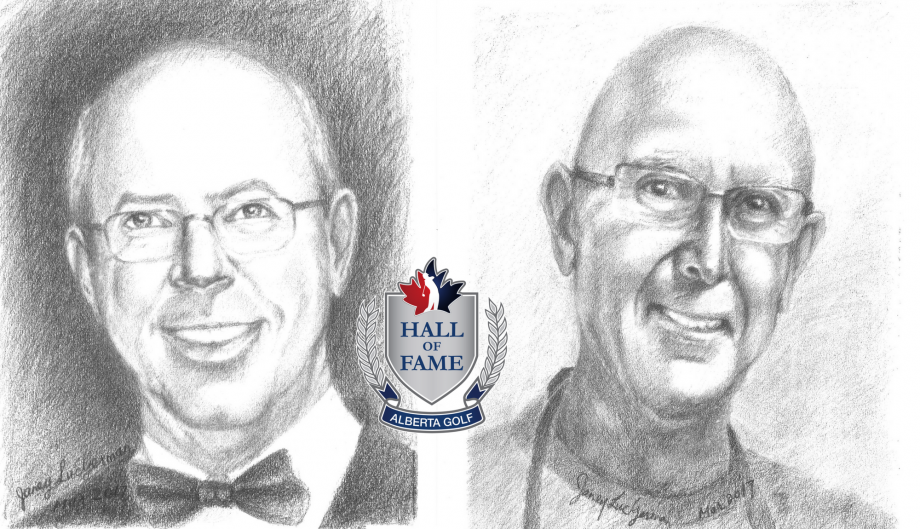 The Alberta Golf Hall of Fame is proud to announce that two long-time volunteers will be inducted during a ceremony at the Sundre Golf Club on May 17, 2017.

“The two individuals being inducted into our Hall of Fame this year have a storied history of giving back to the game,” said Alberta Golf Executive Director/CEO Phil Berube. “Mr. Swelin and Mr. Blake have combined to contribute 55 years of service to making Alberta Golf a better organization. Since 1989, these gentlemen have spent countless hours planning, executing and supporting the Association’s mission to enhance our Rules & Competitions offering which now serves as a model for the rest of the country.”

Les Swelin and Martin Blake will be inducted under the distinguished service category. With their inductions, the duo will become the 33rd and 34th honoured members of the Alberta Golf Hall of Fame.

Les Swelin entered the Alberta Golf Association as a board member in the fall of 1989 from the small town of Hughenden, before moving to Sundre Golf Club. His passion for the game as a player and devotee to the Rules of Golf was evident early on. Les would quickly become a respected operational and governance trailblazer. His influence would reach provincially, nationally and internationally. His voice of reason, calm demeanor and reach for high standards of excellence helped set the course for amateur golf for three decades.

His early contributions were in junior golf. He quickly became the chair of the junior committee and with his fellow members truly modernized the provincial junior golf program. New camps, tournaments and team events would soon be producing elite golf talent never before seen in Alberta. Being a visionary, Les was instrumental in influencing the direction of junior golf at the national level as well, working to enhance the quality of junior golf in Canada. His efforts would pay great dividends as players from his program would go onto to win the Canadian Junior Team championship for the first time in 1997. Perhaps most impressively, players who began their junior careers under the leadership of Les Swelin won for the first and only time the prestigious Junior America’s Cup team championship in 2002.

As a natural leader, Les was called upon to chair committees, tournaments and eventually the entire association as President in 2006. His dedication to the game was untiring and he would always be sought after for strategic guidance. Never being one to follow trends, he could always be relied on for formalizing plans that would be beneficial at all levels. Les served as President during the vote to build a new, permanent office for Alberta Golf – ‘Golf House’.

Alberta Golf owes a great deal of gratitude to the vast array of volunteers that have propelled the game forward to such popularity over the past 30 years. At the front of the wave are captains of industry such as Les Swelin. He stands apart for his energy, enthusiasm, longevity and leadership. His impact has resulted in a better game but more importantly has positively enhanced an army of young men and women ready to take on the world in all aspects of life.

Martin Blake came to the Alberta Golf Association in 1990 after a professional career in the banking industry and a volunteer career within the hockey community. Almost immediately after he joined Alberta Golf he became a much-respected tournament rules official which would soon lead him into the highly technical aspects of the Rules of Golf. His calm demeanor under pressure would make him the ideal Rules Official. He would soon be asked to adjudicate the rules at local, provincial and national events at almost a full-time level. His wife Norma would joke that she would pack his bag in May and look forward to seeing him again in September.

Martin’s understanding and expertise with the Rules of Golf would eventually lead him to being named the chair of the Royal Canadian Golf Association’s (Golf Canada) Rules Committee. This would open the door to being a Rules Official at many Canadian Men’s and Women’s Opens as well as the RCGA’s amateur championships. One of the crowning achievements was being called upon to be a Referee at the President’s Cup Matches held at the Royal Montreal Golf Club in 2007. Internationally, Martin attended rules of golf meetings with the R&A and USGA and was certified as one of the world’s leaders on the Rules of Golf at the Royal and Ancient Golf Club at St. Andrews. Always one to share his knowledge on the Rules of Golf, Martin became a professor of the topic again for all levels. Many of today’s top officials were influenced by Martin Blake’s teachings and mentorship.

His eternal source of energy, dedication and goodwill could only come from a deep-rooted passion for sport that very few in a community ever have. The hours Martin Blake contributed to the leadership of the game of golf can only be explained as a calling. He was a calm, respected resource at all levels of the game. Never was there a more loyal, confident gentleman who could inspire those around him to be better. He held many varied roles within the organization such as executive committee member and tournament and committee chairman. If golf was a game designed for gentlemen, then Martin Blake was the prototype gentleman for whom it was so designed.

Martin also served as an Alberta Golf board and executive committee member. He was voted by his peers to be their RCGA Governor for many years where he represented his province’s best interests on the game of golf. His strong leadership and team skills made him a highly esteemed member locally, provincially, nationally and internationally. His long and lasting legacy has left an indelible mark on the game of golf.