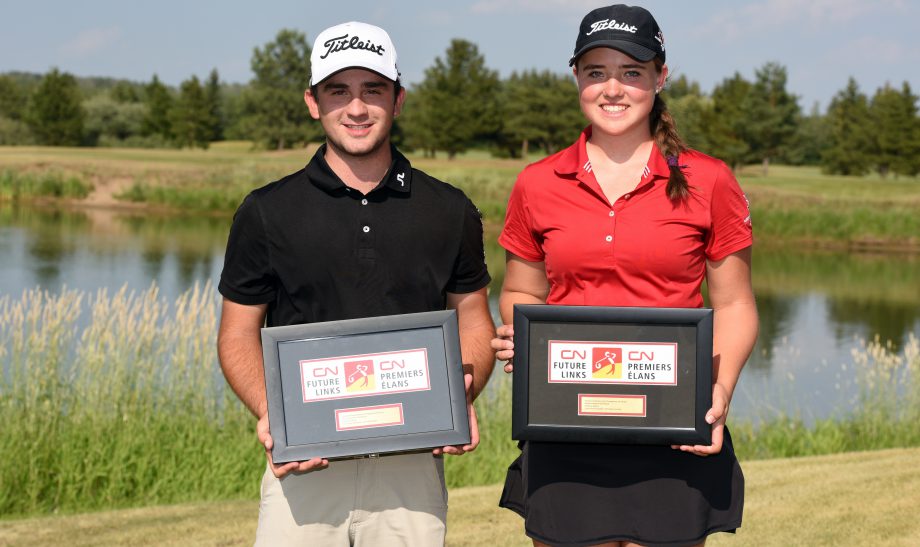 GIBBONS, Alta.  – The third and final round came down to a playoff for the Junior Boys at Goose Hummock Golf Course in Gibbons, Alta., with Jason Martens emerging as the 2015 CN Future Links Western champion. Kenna Hughes held firm on her one-stroke, second-round lead to be crowned the Junior Girls champion.

Martens of Edmonton was forced into a playoff after Brendan MacDougall of Calgary finished with back-to-back birdies. The competitors came away from the first extra hole with a birdie apiece; Martens claimed the championship by making par on the second playoff while MacDougall registered a bogey.

The 18-year-old Martens entered the final round one stroke off the lead. The 2015 Alberta Junior Championship runner-up completed the round with three birdies to shoot 1-over 72 and end the tournament at 5-over-par 218.

“I just stayed pretty patient all day and didn’t really go for too many pins. I just tried to put it in the middle of the green and two-putt,” said Martens. “My game plan was pretty much the same as it’s been for the past two days, just keep the ball in the fairway, put it on the green and keep it away from the water because it’s so easy to drop a shot at this course.”

Brendan MacDougall, 17, put on a valiant effort in the final round, tying the tournament low score of even par. He recorded rounds of 73-74-71 to total 218. Ryan Rody of Calgary opened the day tied for fourth; he pulled into solo-third after an even-par performance and finished two shots back of the winner. Finishing in a three-way tie for fourth place were 2015 CN Future Links Prairie champion Alexander Smith of Calgary, Kade Johnson of Yorkton, Sask., and Alex Park of Vancouver.

In the Junior Girls division, Kenna Hughes of Calgary rebounded from a 5-over front nine to finish bogey-free and capture the Junior Girls title. The 17-year-old, who entered the round ahead by one stroke, fired an impressive 3-over 74 – tied for the Junior Girls tournament low – en route to a three- day total of 231.

“It was close between Kehler (Koss) and I all day, but I hit it well on the back nine, made a couple birdies and got ahead. It was definitely close and very stressful. I was close last year, but I just couldn’t quite pull through, so it feels really nice that I could do it this year,” said Hughes, who finished last year’s tournament in third place.

Also shooting 74 on the day was Kehler Koss. The Calgary native finished even-par across the back-nine and finished the championship with a score of 19-over-par 232. Claiming third in the competition was Jayla Yoonji Kang of Surrey, B.C., who notched back-to-back birdies on the final two holes to finish with an 80 on the day and a 243 for the tournament.

Hughes and the remaining members of this competition’s top-six finishers have received exemptions into the Junior Girls national championship, to be played in Yorkton, Sask., from August 4-7 at Deer Park Golf Course. She has also earned entry into a 2016 Canadian Women’s Tour event of her choosing.

Jason Martens and the first to fifth runners-up in the Junior Boys division have been awarded direct entry into the 2015 Canadian Junior Boys Championship field. The tournament will be contested from August 3-6 at at Summerlea Golf & Country Club in Vaudreuil-Dorion, Que.

The 2015 season’s concluding event – the Atlantic championship – will tee off July 13-16 at Gowan Brae Golf & Country Club in Bathurst, N.B.