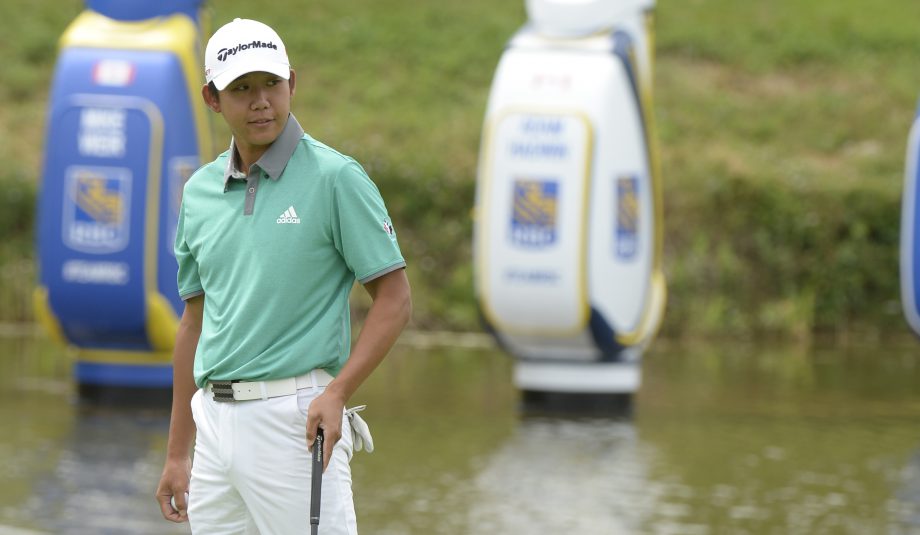 For Toronto’s Albin Choi, the transition from amateur to the professional ranks has been a bit of a bumpy ride.

But now in his third full season as a pro, the former Northview Heights Secondary student is starting to find his comfort zone; and the results are starting to show on the golf course.

As an amateur, the Toronto golfer was nothing short of spectacular. Besides winning the Canadian Amateur title in 2010, the Ontario Amateur title in 2012, and nine collegiate titles during his three years at North Carolina State University, Choi was also awarded the Gary Cowan trophy as the low amateur at the 2012 RBC Canadian Open.

Having turned professional after his junior year at NC State University, the former Canadian national team member admits that he’s gone through a bit of a learning curve.

“I haven’t been playing that well the past couple of years but the game’s been coming around,” said Choi recently at the RBC Canadian Open.

“It was just a bit of a learning curve when I came out of college and now I’ve been playing professional golf for a couple of years, so I’m getting use to how things work and I think I’m just getting a bit more comfortable out there,” added the 5 foot 11 inch amateur standout.

Someone who shares Choi’s assessment about the challenges involved in transitioning from amateur to pro is Canadian golfing legend, Gary Cowan.

“Once you’re a pro you have to learn how to play again,” said Cowan, who captured the United States amateur title in 1966 and then again in 1971.

“When you’re an amateur, you’re with your collegiate team or you’re with the Golf Canada amateur team and you go where everyone else goes. But when you turn pro you’re on your own and you have to learn to be on your own; and you have to take the time to learn and get familiar with the golf courses that you are playing on,” explained the 76-year-old Canadian golfing icon.

Having first met Choi in 2012, Cowan is confident, that with time, the amateur standout will be able to find similar success on the professional circuit.

“I first met him at the RBC Canadian Open in Hamilton and he’s very nice and quiet. I think he’s very talented; give him a couple more years and he’s going to be a really good player,” Cowan added about Choi.

Someone else who is eager to speak about Choi’s talents and dedication on the golf course is former high school classmate and current teammate on the Golf Canada’s Young Pro Program, Rebecca Lee-Bentham.

“Albin’s consistency really impressed me. He was the best putter I knew as a junior,” recalled the fourth year LPGA pro, who transferred from Bayview Secondary in Richmond Hill to Northview Heights Secondary after completing grade 10.

“He’s dedicated and always very focused when he practiced,” she added about Choi’s commitment.

For his part, Choi says it’s his commitment to improving and learning that has played a key part in his success so far this year.

“It’s always a work in progress but I’m just trying to learn from each tournament and take what I’ve learn into the week after,” he said.

Having learned his fair share of difficult lessons during his first two seasons as a pro as a member of Team Canada’s Young Pro Squad, the Toronto golfer is successfully applying those lessons this year.

Choi started his 2015 season by claiming medalist honours at the Mackenzie Tour – PGA TOUR Canada Qualifying School, and followed that up with a victory at the Bayview Place Island Savings Open in early June.

“Winning always boosts your confidence. It was a big accomplishment for me early on in the year so I’m just trying to keep it going,” he pointed out.

Despite failing to make the cut recently at Glen Abbey, Choi is confident that he has the all-around game to compete against the PGA TOUR’s best.

“My game is definitely good enough to compete out here; just a couple of small errors here or there that I need to touch up on.  But I feel my game is just as good as these guys,” he said.

“I just have to play more on the big stage and get used to being out there with the best players. I’ve played in four of these RBC Canadian Opens and I learn from each of them; and I just need to get myself into more tournaments like this,” Choi added.

With valuable experience now under his belt and a success first half of 2015 in the books, the 23-year-old golfer takes comfort in the fact that he’s heading in the right direction; and firmly believes in his abilities to meet his long term goals.

“I’ve just got to keep working at it and just keep doing what I’ve been doing,” he said. “And I definitely see myself on the PGA TOUR five years from now – hopefully with a win or two.”