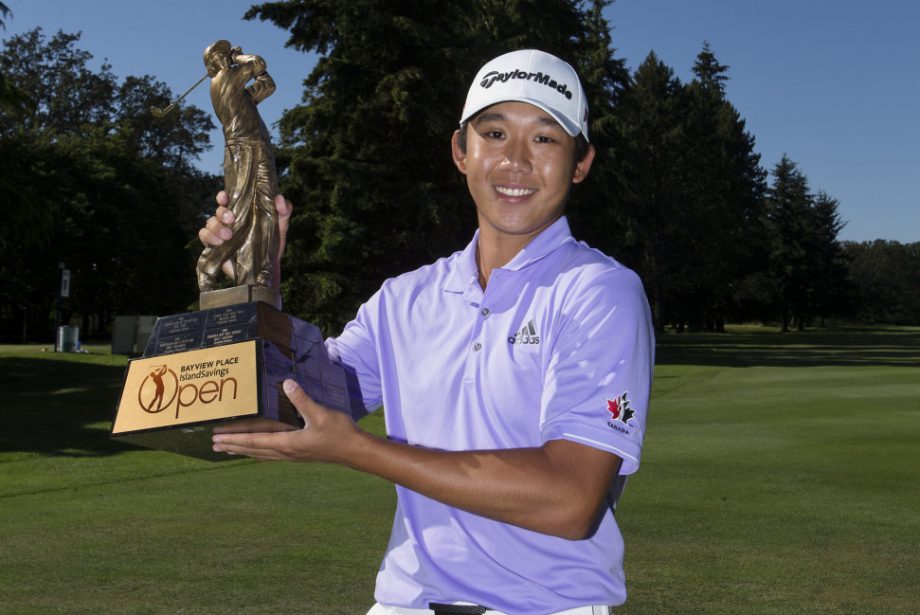 The 23-year old came out of the gate hot on Sunday, making birdie on four of his first five holes to separate himself from the field, then held on down the stretch to win by three over North Vancouver, British Columbia’s Eugene Wong, Surrey, British Columbia’s Adam Svensson and Murfreesboro, Tennessee’s Jason Millard.

The win moves Choi to the top of the Mackenzie Tour Order of Merit, in position to earn full status on the Web.com Tour for 2016.

“I feel like I just won a battle,” said Choi, who became the first Canadian to win in Victoria since Craig Taylor in 2005. “It feels awesome and it feels even better to do it early on in the year. There are so many events coming up and it gives me so much confidence and momentum going forward.”

After an even par 70 saw his five shot lead disappear on Saturday, Choi entered the day tied for the lead with Svensson and Edmond, Oklahoma’s William Kropp at 11-under. He quickly established himself as the man to beat, however, with four birdies in his first five holes and five over his first seven. After taking a three shot advantage into the back nine, Choi made bogeys at 12 and 15, but bounced back with birdies on the following hole each time to keep the field and bay.

His birdie at 16 was enough to let him cruise with two-putt pars on the last two holes, and after Svensson was unable to hole his second shot from the 72nd fairway to force a playoff, the title belonged to Choi, along with the $31,500 first place prize. As the top Canadian on the leaderboard, Choi also earned a $2,500 prize as Freedom 55 Financial Canadian Player of the Week.

“Just looking at the leaderboard, there were so many guys that could win this tournament today, so my job was to try and forget everything that happened yesterday and try and come in here with a clear mind. There are so many good players. Adam was breathing down my neck pretty much the entire day,” said Choi.

A member of Golf Canada’s Young Pro Squad, Choi made his professional debut at Uplands in 2013 and went on to earn status on the Web.com Tour for 2014. After finishing outside the top-100 on the Money List, Choi failed to retain status and returned to Mackenzie Tour Q-School this spring, where he was the medalist at the Florida Qualifying Tournament.

“Having full status last year and losing my card and coming back out this year, I looked at it as a positive, another year to work on my game and build myself not only as a player but as a person,” said Choi, who credited an adjustment in his mental approach to his stout play this spring. “I’ve been putting a lot of pressure on myself the last little while, and I’ve noticed that’s just not the way to play. I’ve been playing a lot more free and enjoyable, and it’s a funny thing, good things are happening.”