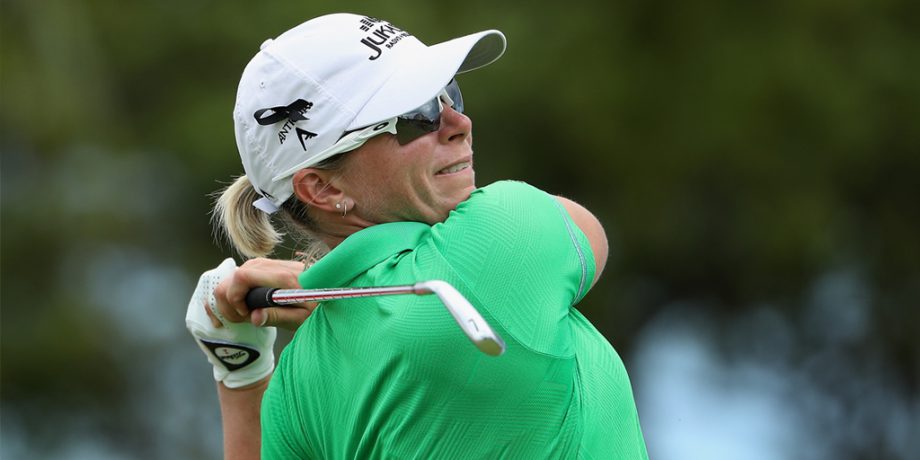 KAPOLEI, Hawaii – Su-Yeon Jang took the Lotte Championship lead in the completion of the third round Friday morning and opened a three-stroke cushion in the afternoon with a third-round 7-under 65.

The 22-year-old sponsor invite from South Korea had a 17-under 199 total – two strokes off the tournament record for 72 holes – at Ko Olina Golf Club. She completed her second straight 67 in the morning in the rain-delayed event.

Cristie Kerr and Alena Sharp, the 35-year-old Canadian looking for her first LPGA Tour victory, were tied for second. Kerr had a 62 to tie Lizette Salas’ tournament record. Kerr, who turns 40 this year, played the back nine in 29, with birdies on seven of her last eight holes.

“I was just kind of being myself,” said Kerr, who had eight putts on her last eight holes. “Yeah, everybody says being in the zone. I just kind of stayed out of my own way today, which is what I have to do to have a chance tomorrow.

“I stayed in the moment and started walking them in.”

Sharp stayed with Jang, birdie for birdie, until a bogey on the final hole left her with a 66. She was just one back after sinking a 15-footer from the fringe on the 16th.

Sharp has not won in 240 LPGA starts, but is coming off her best year. The only LPGA player with more starts without a win in this field is Becky Morgan (315). She is tied for 10th, seven shots back. Morgan’s last Top 10 was in 2009.

Sharp admits “It’s hard to win out here,” but has never wanted to stop trying.

“I just love playing golf, so I don’t think about it as I need to win,” she said. “I just love the competition. I love travelling to all the different places we play and the amazing courses we play. I just have a lot of passion for the game itself.”

“I was able to hole some longer putts in my front nine, which is the back nine,” said Ko, whose 14th – and last – win came in July. “When you get to hole the putts that you don’t necessarily think they’re birdie range, it’s always nice. It’s kind of a bonus.”

Top-ranked Lydia Ko, looking for her first win since July, was tied for seventh at 9 under after a 65. She was eight strokes behind the leader, a shot behind second-ranked So Yeon Ryu (69) and two back of third-ranked Ariya Jutanugarn (70).

Jang, who doesn’t have a bogey this week, also played in the final group last year at Lotte and finished fifth.

Hawaii has thrown its share of surprises at this year’s field. For the third day in a row there was a weather delay Friday. The wind and rain, and thunder and lightening, have made Ko Olina a tropical adventure.

When darkness halted play Thursday, Jang had two holes remaining and a share of the lead at 9 under with Ariya Jutanugarn and In-Kyung Kim. Jang birdied her 17th hole early Friday to claim the second-round lead, then had “some real good food my dad cooked up” before teeing off in the third round.

After the leaders played their first hole, play was halted for an hour. Jang came back with four quick birdies and added three in a row on the back nine. She needed just 25 putts.

“Because I had to finish up the second round this morning and play another 18 I was a little bit tired,” she said through an interpreter. “But I know I’m so far away from home and I travel so long to play this tournament, so I try to tell myself just to suck if up and have a good time and play a good round today.”

She was brilliant, and has been in nearly every round she’s played at Ko Olina the last two years. The exception was last year’s final round, when a 71 in the final group wasn’t nearly enough to keep up with Minjee Lee.

Instead Jang, ranked 68th in the world, won twice on the Korean LPGA tour last year and finished third on the money list.

“Obviously I’ve gained a good amount of experience doing that,” Jang said. “Hopefully tomorrow I won’t get too nervous. I think that experience will help me play in the rest of the round tomorrow.”

The last time a sponsor invite won on the LPGA it was Lydia Ko at the 2013 CN Canadian Women’s Open. Ko turns 20 in 10 days and was born the same year Kerr debuted on the tour.

The cut came Friday morning at 1 under, with 78 golfers playing on. Michelle Wie, the 2014 Lotte champion, made the cut on the number. Lindy Duncan holed out on the 18th hole early Friday for eagle to make the cut.

Nicole Broch Larsen was also one of the 15 players who came back to finish their second round Friday morning. She had a hole-in-one on her 17th hole (No. 8).