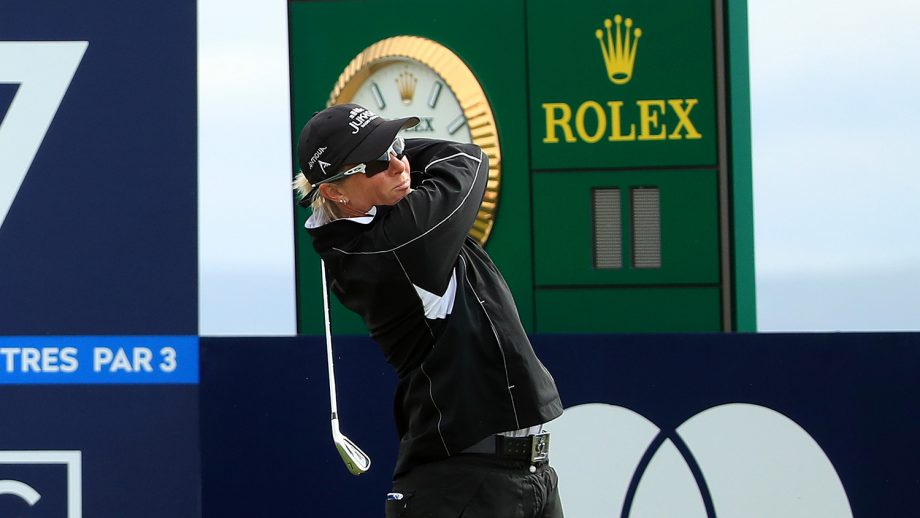 TROON, Scotland – As if Royal Troon isn’t playing hard enough for the world’s top female golfers this week, Dani Holmqvist is going around the wind-swept Scottish links carrying a nagging back injury from a cart crash in 2018.

It’s not stopping the Swede leading the Women’s British Open after two rounds.

On another tough day when first-round leader Amy Olson shot 81 – 14 strokes worse than Thursday – and stars like Lexi Thompson, Canadian Brooke Henderson and defending champion Hinako Shibuno missed the cut, Holmqvist shot 1-under 70 in windy morning conditions to be the only player under par after 36 goals.

A 1-under total of 141 left Holmqvist a stroke ahead of Austin Ernst of the United States (70) and Sophia Popov of Germany (72). The rest of the 144-strong field were over par for a tournament being played without spectators and in an isolated environment on the southwest coast due to the pandemic.

Holmqvist’s form has come out of nowhere, with the 32-year-old Swede having missed the cut in 13 of the 20 events she has played since the golf cart in which she was riding between holes in the Blue Bay event on the LPGA Tour in November 2018 lost control and slammed into a wall.

As well as suffering with a leaking disk in her back, Holmqvist had a badly inflamed facet joint that has required multiple injections and regular rehab. The suspension of golf because of the coronavirus outbreak gave her some much-needed time to heal but she still described herself as “injured” on Friday.

“It’s a long process and very tedious,” she said. “It’s an everyday thing.”

Capturing a first major title – indeed, a first professional win at senior level – won’t be easy, and not just because of how hard and long Troon is playing in often 50-mph (80-kph) winds.

Lying two strokes behind Holmqvist on 1 over par are former No. 1 Lydia Ko (71) and No. 8-ranked Minjee Lee, who shot 69 to tie for the lowest round on Friday. A further shot back is No. 4-ranked Nelly Korda after her round of 72.

“We were like, `Are you scared over 1-footers, too, with this wind?’ Korda said, referring to a conversation she had with playing partner Georgia Hall, the 2018 champion. ”Because we were like shaking over it with wind and the gusts.“

Hamilton’s Alena Sharp is 3 over for the tournament after a 74 on Friday. Henderson, frm Smiths Falls, Ont., was 10 over for two rounds, missing the cut by one stroke.

After what she described as the best ball-striking round of her career to shoot 67 on Thursday, Olson came back to earth with a 10-over round that included six bogeys on her first 10 holes before double-bogeys at Nos. 11 and 14.

The American parred her way home to limit the damage and won’t feel out of it at 6 over.

Another American, Lindsay Weaver, is closer to the lead on 1 over after shooting 72 while pushing her own trolley.

“It’s kind of back to the basics. This is how junior golf was,” she said.

Flying solo with a decade-old trolley that doesn’t have functioning breaks isn’t without its perils, either.

“I was in one bunker,” Weaver said, recalling an incident in her first round, “and my push cart flew into another bunker and toppled over. I’m still trying to get a lot of the sand out of my bag.”

It has proved to be a week to forget for Lexi Thompson, who has shot 78 and 75 to miss the cut by two strokes.

At least she avoided the ignominy of being penalized for using the head of her club to push away long grass from her ball on the 16th hole of her first round.

“Following a discussion between chief referee David Rickman and the player prior to her signing her scorecard,” the R&A said in a statement Friday, “it was determined that, although the player had moved a growing natural object behind her ball, it had returned to its original position.

“Therefore, the lie of the ball was not improved and there was no breach of Rule 8.1.”