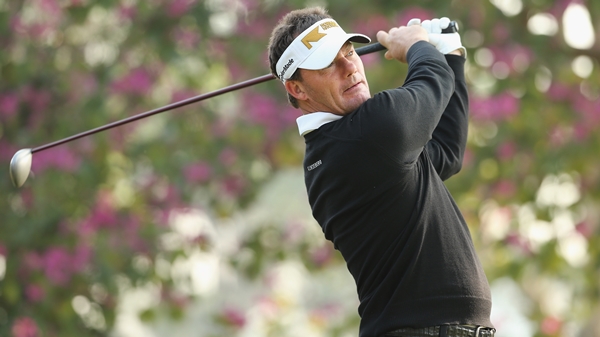 BOGOTA, Colombia – Alex Cejka won the Web.com Tour’s season-opening Colombia Championship on Sunday, setting a course record with an 8-under 63 in the completion of the third round before rain washed out play.

The 43-year-old Czech-born German played the final 16 holes of the third round Sunday morning at water-logged Bogota Country Club, birdieing four of the last five holes to reach 14-under.

Cejka was halfway through the final round when play was suspended and the round wiped out. At the time, he had a one-stroke lead over Andrew Putnam.

“It’s been a long time,” Cejka said about the victory. “I had a feeling the rain might come again. I just tried to hang in there. I knew it was going to be tough this afternoon, so I was just grinding.

“Unlucky or lucky, depending on how you see it with the weather. It’s nice to win. It doesn’t matter on what tour these days because there are so many great players.”

Cejka won the last of his four European Tour titles in 2002. He’s winless in 270 career starts on the PGA Tour, with career bests of a tie for second in the 2003 B.C. Open and a solo second in the 2004 International.

“When they announced it was going to be 54 holes, I was a little relieved,” Cejka said. “I wanted to complete the round but I’m so happy to have won again.”

Putnam ended up three strokes back after a third-round 68.

Both Canadians who survived the cut had strong third rounds.

Adam Hadwin shot a 5-under 66. The Abbotsford, B.C. native tied for 11th at 7-under par. The finish is the best he’s had on the circuit since last July, when he tied for 7th at the Utah Championship.

Nick Taylor had a good showing in his debut as a Web.com Tour member. Taylor, also from Abbotsford, B.C., finished 3-under par and tied for 41st after rounds of 71-71-68.