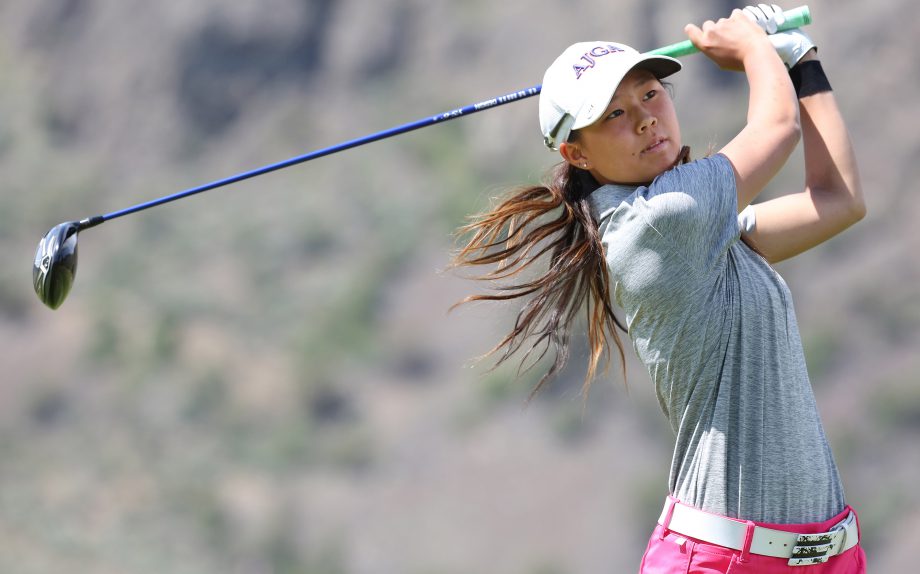 SHUBENACADIE, N.S. – Dry heat and harsh winds made for unpredictable conditions at the Links at Penn Hills as the opening round of the 2016 Canadian Junior Girls Championship got underway. Alisha Lau persevered through a blustery back nine and sits alone atop the leaderboard at 2-under 70.

The Richmond, B.C., native tallied four birdies on the front nine to make the turn at 3-under. The 16-year-old added another birdie on the par-4 10th hole, but bogeys on Nos. 15 and 17 cut into her advantage.

“I felt pretty good. I got off to a hot start, so that helped boost my confidence,” said Lau. “The front nine was pretty calm because the trees shielded it from the wind, and then on the back nine it really started picking up. I’m playing pretty conservatively and trying to find my happy medium. I don’t hit it too long either, so I can use the bounce from the fairway to really help me.”

Lau’s best finish at this competition was a T20 in 2014 at Thornhill Golf & Country Club in Thornhill, Ont. In the second round of last year’s championship at Deer Park Golf Course in Yorkton, Sask., she was forced to withdraw due to a bout of food poisoning.

“I took a lot of time off in the winter, so this year I’m just trying to play my game. I haven’t been putting too many expectations on myself. My score today is giving me a little bit of confidence for the next three days, but they’re going to be a long three days still. It’s going to be a grind.”

Victoria’s Naomi Ko leads all Team Canada members in the field at 1-under 71. The Team Canada National Amateur Squad member carded four birdies on the day to join Lau as the only players to finish below-par.

Fellow Victoria native Akari Hayashi recovered from a 4-over front nine with a five-birdie performance through her final seven holes to finish the day in third at even-par. The 13-year-old holds a three-stroke lead over Development Squad member Tiffany Kong in the Juvenile division.

The 2016 Canadian Junior Girls champion will receive an exemption into the 2017 Canadian Women’s Amateur Championship hosted by Cutten Fields in Guelph, Ont., from July 25 to 28.

The second round of the Canadian Junior Girls Championship will see the first group of girls tee off from the first hole at 7:30 a.m. ADT.