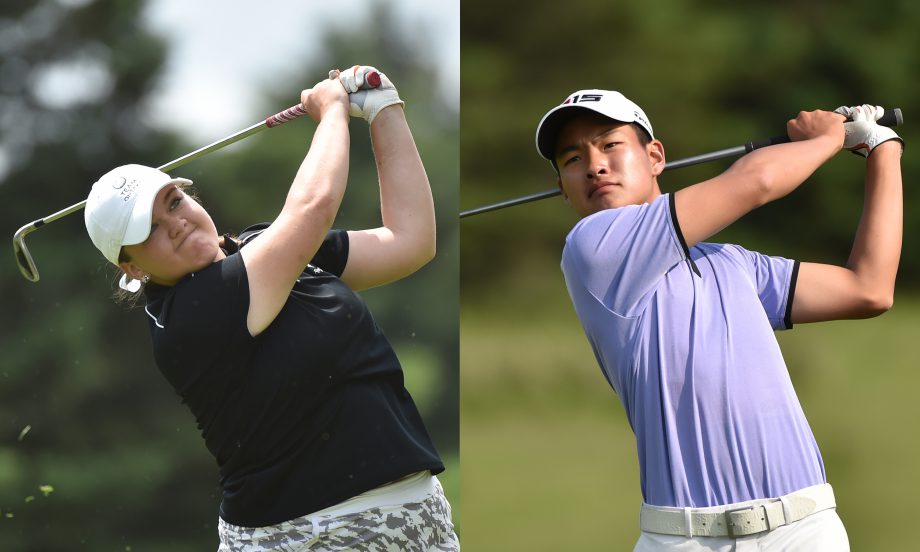 Before Alyssa Getty of Ruthven, Ont., teed off this morning, she was tied for fifth place and sat two strokes out of the lead. After nine holes, she found herself three back, but remained focus on the task at hand.

“My game plan was to be more aggressive today than I was the other two days and I definitely got some momentum going,” said Getty of her round today.

She played the back nine at even par, bouncing back with a birdie after a bogey on 14. Her par putt on 18 secured her third CN Future Links Championship victory in two years, including back-to-back wins at this event. Earlier this season, Getty captured the CN Future Links Ontario Championship.

Getty added that there was a little extra pressure coming into this tournament as the defending champion, but she stayed calm with her sights set on the victory. “It’s crazy. I’m so excited, especially since it’s my last year of junior golf and playing well in the CN Future Links Championships has been one of my goals. I’m really happy about having won this week and at CN Future Links Ontario this season.”

Getty’s score of 2-over 74, was the lowest in the Junior Girls division on Sunday. Her 224 total for the competition put her one stroke ahead of runner-up Sarah-Ève Rhéaume. The 36-hole co-leader and Québec City, Que. native made the turn this morning with a 1-over 37, but could not hold on for the win. She concluded the tournament with a 5-over-par round of 77.

Finishing T3 at 228 were Noémie Paré of Victoriaville, Que., and Céleste Dao of Notre-Dame-de-L’Île-Perrot, Que., who carded rounds of 78 and 79, respectively.

In the Junior Boys division, Jason (Chan Young) Chung posted the low round for the second consecutive day. The Thornhill, Ont., native’s final round of 6-under 66 earned him the CN Future Links Junior Boys Quebec title with a three-day score of 11-under 205.

“It’s very surreal, I haven’t won in a couple of years,” shared Chung of the win today. “It’s really been a good past few days and I feel I’ve finally broke through with my game. It is a boost of confidence that I can hopefully take into the next couple of tournaments I will be playing. I’d like to think of it as a new chapter because I’ve never gone this low.”

Chung noted that his game plan coming into the final round was to focus on hitting fairways and greens to set him up for as many birdie chances as possible. He was able to follow though, notching eight birdies on the day. He credited his work around the greens for the victory. “I made most, if not all, of my putts from inside eight feet, so I think that’s what made the difference today.”

Finishing two strokes back in second place was Charles-Éric Bélanger with a final round 67. The Québec City, Que., product made a determined attempt to catch the leader, notching four birdies on the front nine for a 3-under 33 before adding three consecutive birdies on holes 13, 14 and 15. Third-place finisher Maxime Laoun matched Bélanger’s front nine score of 33 and went on to sign for a final round 4-under 68. The Montréal, Que., native finished the competition at 209.

Jason (Chan Young) Chung will return to the province of Quebec from August 3-6 to compete in the 2015 Canadian Junior Boys Championship at Summerlea Golf & Country Club in Vaudreuil-Dorion. Also receiving exemptions into the field were the five runners-up from this competition determined in a playoff.